The “Uberization” of Work Is the Gig Economy a Growing Threat to Job Security?

During the Covid-19 lockdowns, the widespread use of “uberized” home delivery services threw more light on the “gig economy”, which uses digital platforms to put customers in touch with freelancers. Who works in this sector and what are these precarious jobs like?

On 19 April 2022, a Paris court fined the Deliveroo platform 375,000 EUR for travail dissimulé, i.e. disguising dependent employment as self-employment. At issue was the status of its purportedly freelance couriers: the court found that they are actually working in a position of subordination to the British food delivery company, for their working conditions are similar to those of salaried employees (e.g. fixed working hours, mandatory uniform, use of scripted language in dealings with customers, etc.) without any of the corresponding social security benefits. Thanks to this system, Deliveroo was apparently able to save roughly 6.4 million EUR in social security contributions for the years 2015 and 2017.

The phenomenon underlying this high-profile legal battle is often described by the French press and some researchers as the “ubérisation” of work. This neologism was added to the Petit Larousse dictionary in 2017, in which it is defined as “the advent of a new market player jeopardizing the economic model of a company or sector by offering the same services at lower prices and performed by self-employed workers instead of salaried employees, generally using online ordering platforms”.

Mass unemployment and the gig economy

In a general context of mass unemployment, workers are more likely to accept difficult, even gruelling working conditions. Hence the concomitant increase in involuntary part-time work, for example, and short-term jobs. Companies seek to adjust working hours and wages as closely as possible to their own needs – or those of their customers, in the case of digital platforms – which places the burden of maximum flexibility and high job insecurity on the workers’ shoulders.

Digital platforms exacerbate this situation by hiring workers on a freelance basis, which gives them greater autonomy and responsibility, even though they are often economically dependent on these market middlemen. It’s a paradoxical situation, for these dependent workers are nominally self-employed – and consequently denied the social protections afforded to salaried employees. What’s more, for standardized services such as home delivery and cleaning, the platforms have a large pool of providers to draw on, so they can make them compete for available jobs, which are then awarded to the first to respond to a customer’s order.

But it takes all sorts

On the other hand, some gig workers prefer it this way. “A freelancer’s situation is not the same if this is their main employment or just a sideline,” points out Marie-Anne Dujarier, a sociology professor at the Université Paris Cité. Gig workers have a wide range of different profiles: some are tradespeople or salaried employees who already have a job; some are students, retirees or housewives; some are looking for a steady job or in retraining. Earnings from platform work are not as important if the gigs are merely a sideline. 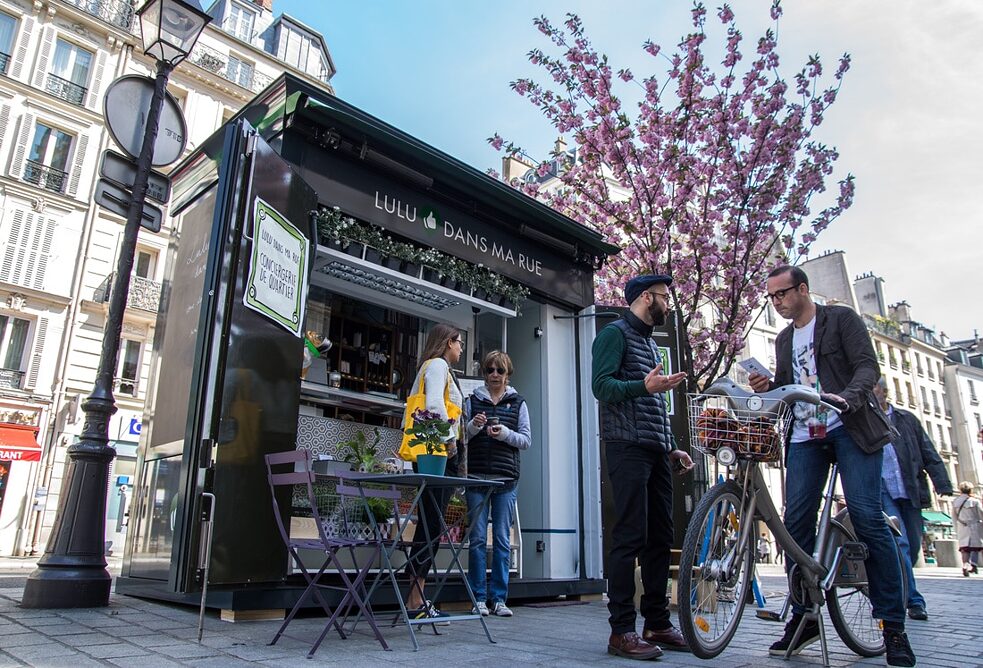 "I am 25 years old. For the past five years, I have been providing removal services with Lulu in my street. The services are offered to us via an application that sends the ad to Lulus (service providers) who meet the profile sought by the client. I usually work in a team with other Lulus, sometimes alone. When we are interested in an assignment, we contact the client to set up the organisation and the schedule. Once the job is finished, we invoice the client. I get about 60% of what I charge: Lulu takes a 21% commission and the remaining 23% goes to Urssaf. My salary is between 800 and 1,400 euros per month, depending on demand, which is higher in the summer. I appreciate the relationship with the customers, the flexible working hours and the fact that I can control my schedule: when I want to take time off, I don't work. I used to be a deliveryman, I prefer to do removals. But the instability of income is a disadvantage: if I can have a stable job, it would be better. | © Lulu dans ma rue Some self-employed workers choose to retain their independent status. Lulu dans ma rue is a case in point: this local concierge service, which has both physical kiosks and an online platform, puts residents of Paris neighbourhoods in touch with local service providers (DIY/odd jobs, computer troubleshooters, pet-sitters, etc.), some of whom (30 to 40%) receive socio-professional support to help them (re)integrate into the French labour market. “Working with Lulu dans ma rue enables them to build a clientele and avoid clandestine employment,” explains Charles-Édouard Vincent, the founder of this solidarity-based neighbourhood service. “Many prefer the flexibility of self-employment – and the freedom to refuse certain jobs – to the rigid framework of salaried employment. We also try to make entrepreneurship accessible to as many as possible.” So the jobs these freelancers get from Lulu dans ma rue help them get back on track professionally or build up a little business.

So, is the workaday world becoming increasingly “uberized” in France as a whole? “As a sociologist, I don’t use this term – except for the specific case of ride-hailing apps,” explains Dujarier. “The socio-economic models of the various marketplaces differ widely from one sector to another. Le Bon Coin, Uber, Foule Factory, TaskRabbit, Deliveroo, Netflix and Airbnb all have one thing in common: they put customers in touch with suppliers (or service providers) via digital platforms. But the business models, corporate practices and legal issues are very different depending on the types of tasks involved and the equipment required to perform those tasks.”

So if “uberization” strictly speaking only applies to drivers working for app-based ride-hailing services, it concerns a mere 0.1 per cent of the French workforce. Furthermore, “Marketplaces don’t so much create precariousness as take advantage of it,” adds Dujarier. “And getting people on the fringes of the labour market to accept lousy working and living conditions is as old as wage-based capitalism.” And we should bear in mind that nearly 90 per cent of workers in France are salaried employees or civil servants: “So we can hardly call it an ‘uberized’ society,” notes Marie-Anne Dujarier.

Generally speaking, “uberization” is liable to have a particularly harmful impact on already vulnerable segments of the population, observes Guillaume Almeras, the head of the Department of Employment and Solidarity Economy at Secours Catholique (a French Catholic charity): “The people hardest hit by the current reconfiguration of work – the people we help out – are the ones who were already the most vulnerable. People who have adequate psychological and intellectual resources are better able to cope. But generally speaking, how can you possibly build a future if you’re working an uberized job with fragmented working hours and very long unpaid daily commutes, and when the banks only lend to people with a steady job? This professional model also exacerbates inequalities and social divisions between protected and unprotected groups. Against the backdrop of economic privatization, it poses a threat to our social contract, and the most vulnerable have to pay the price.”

The viability of this model has yet to be established, moreover, so whether it’s here to stay remains to be seen. “The workers don’t earn much,” Marie-Anne Dujarier points out, “the companies routinely show losses, and the government pays massive subsidies while losing tax revenue into the bargain. In the final analysis, it looks as though the only winners are the consumers, who benefit from lower rates for these services – as long as they aren’t troubled by the working conditions and terms of employment of the service providers.”

In May 2021, Spain passed a so-called “Rider Law” requiring delivery platforms to employ their couriers as salaried staff with social security protection. A year later, while some of the companies played along, others decided to quit the Spanish market or use subcontractors to get around the law. Nonetheless, the law has led to the creation of salaried jobs for several thousand workers and it has given rise to similar movements in France and other European countries.

Aurélie Le Floch is a freelance journalist and editor for several publishing houses, mainly in the fields of literature, the humanities (history, art history) and sociology.