Palestinian singer-songwriter and instrumentalist Rasha Nahas was born and raised in Haifa, and currently lives and works in Berlin. A classical guitarist since the age of ten, Rasha has long been crafting a sound that moves seamlessly between the resonances of early rock‘n’roll and the reckless echoes of free jazz, complemented by her distinctive approach to songwriting and performance. 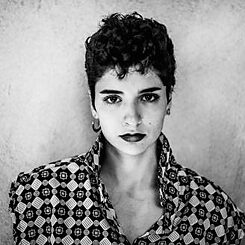 © Rasha Nahas The unmistakable sonic landscapes and unique artistic identity that she has constructed were shaped in no small part by the underground scene of her hometown, Haifa; giving rise to a vivid mélange of electric guitars, classical technique, and fierce yet intimate storytelling weaved with bold, unabashed poetry, and howling violins.

Rasha’s Am I EP and captivating live performances saw her embark on tours across Europe, South America, the UK, and the Middle East, including shows at Glastonbury Festival. Since relocating to Germany, she has worked on numerous dance and theatre pieces for prestigious venues such as Tanz im August (Berlin) and Thalia Theater (Hamburg). Her debut full-length album, which she co-produced and recorded with her band, is due for release on January 29th, 2021

Rasha Nashas: "The song Desert is the title track of my upcoming album. Desert and the album as a whole capture very specific moments of when things rise from the depth to the surface, like tiny floods. I feel that it is a collage of a journey, from Palestine to Germany, from the personal to the political and back. Desert represents both the emptiness of the void and the complexity in between. It is the journey, the thirst, the solitude, the community, the mirage, the encounters on the way, the baggage, the feelings of longing, and the idea of belonging to yourself or to something bigger.

Filming in Haifa made a lot of sense for me as I feel it represents a lot of what I find in myself and my identity – the old, indigenous, half-ruined buildings overlooking the sea, surrounded at the same time by the brand-new, gleaming glass of modern colonialism. The way in which it all comes together somewhat harmoniously, shifts and changes across time, with all the discord within and around it. The militarization of the youth, the normalized violence, the occupation and oppression, as well as our very own roots, intertwined with the land and its soil, embodied by the olive trees and the specter of crucifixion.

The visual metaphors were created with my close friend Elizabeth Kroglov and a superb local team in Palestine producing and acting in the video – Eli Rezik, Hiba Salameh, Samaa Wakeem, Hala Salem, Lamis Ammar and many others, including Ayman Safiah (RIP), who danced the crucifixion of the olive tree. The video is dedicated to his memory."

By Rasha Nahas, released in 2020 on RMAD Records Goethe-Institut
Please, take it all away
I am nobody I could name
My self  I float upon
Pearls, some songs
They’ve been buried for years

Sweet bleeding palms
And the breeze of death
They buried me
I am a roaring breath.

Back to Music in Exile