When we gathered around the hearth. Listening to each other, trying to understand the meanings behind words.

“Translation is a kind of transubstantiation; one poem becomes another. You choose your philosophy of translation just as you choose how to live: the free adaptation that sacrifices detail to meaning, the strict crib that sacrifices meaning to exactitude. The poet moves from life to language, the translator moves from language to life; both like the immigrant, try to identify the invisible, what's between the lines, the mysterious implications.” Anne Michaels ‘Fugitive Pieces’ On a cold winter afternoon in early January in Shillong, three poets and two translators made their way up the hill to ‘Tripura Castle’ to meet for the first time. They looked both at ease and uncomfortable. All the poets had, by way of introduction to each other before meeting, were translinear translations of each others poetry, from Khasi to German, from German to Assamese and vice versa, their journey to the castle, had only just begun. 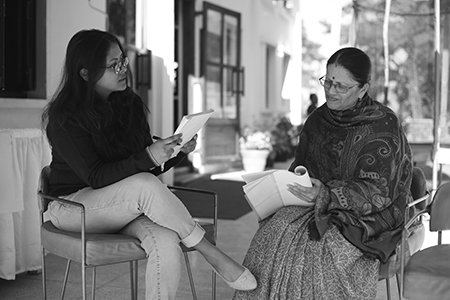 As we sat at that first session, detailing a flow of how this process of dialogue and discussion and understanding could possibly unravel, the cold air surrounding us was thick with excitement and questions - ‘ How were we to achieve all of this in the few days we have together? Where do we begin to explain and at which point will the understanding begin? The questions loomed large.

The first round started, Kerstin Preiwuss, a poet and prose writer, freshly arrived from Leipzig, Germany who describes her language as an animal in her mouth from which the mutinous word breaks out. Wanphrang Diengdoh, the ‘local poet’ from Shillong, also a filmmaker and musician who believes that every language carries deep within itself a history and testimony of a community that speak it, and Maitrayee Patar from the neighbouring state of Assam, who says of her poetry - that it is her meditation. Three people, three languages and many more than three perspectives. There is much that Kerstin has to share and explain about all the things she wants to say that are not in the lines and words she writes, but between them, through them, regardless of them.

“Have you seen my fish?
It was hunted by an octopus.
That had tentacles like I have fingers on every hand.
Maybe it mummified my fish.
Maybe I’m sitting in the belly of the fish.
Maybe the fish touched both of us”
(Translation by Bradley Schmidt)

Listening to Wanphrang explaining his words is like hearing a painter’s process, from rough sketch to form, to what fills the form and what remains empty.

Through the window I see rooftops
Behind them a view of the forest
At the community water tap people fill up their buckets
They grow flowers in front of their homes in war torn jeep tyres.
(Translation by Mary Therese Kurkalang)

While Maitrayee takes everyone on a gentle stroll of landscape and light and colour and nature, as she breathes it. <

Afternoon casts shadows in the city.
Whistles form on the mouths.
Crimson.
A boulevard stretches through a meadow of songs
Homebound.
(Translation by Maitrayee Patar)

The translators struggled to bridge the meanings of words, with context, and history and philosophy and irony and humour and silences. As the hours and the days and the poems wore on, they seemed almost to transform into spirit like mediums – nudging, probing, whispering, gesticulating, sighing, electrifying, laughing - these poets, their language, their worlds. Pushing open a hidden window there, a closed door here.

Through the four days in this almost retreat like quiet hilltop, the weather was ever changing- sometimes windy, sometimes blisteringly sunny, then all at once chillingly cold and the rain came too, fat drops from a cloudburst. A cycle of four seasons in a few days.

We all came together sometimes in relief, sometimes in hunger, at other times in distraction – at meal times. While we ate together, we talked about food and family and people in our lives, we told stories of home and the streets we had left behind, the weather back home, the languages we speak, the language of our thinking and dreams. 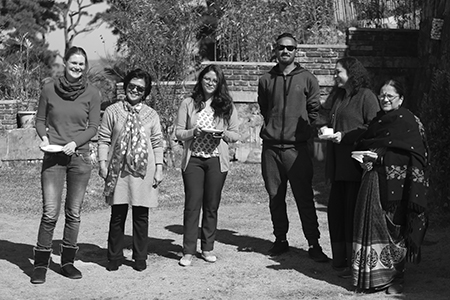 A quick search for information on the three languages – German, Khasi and Assamese throws up some interesting facts. German is the first language of almost 100 million people worldwide and is the most widely spoken native language in the European Union. It is the second most commonly used scientific language as well as the second most widely used language on websites after English. The German-speaking countries are ranked fifth in terms of annual publication of new books, with one tenth of all books (including e-books) in the world being published in the German language.

Khasi is part of the Austroasiatic language family, it is spoken by the Khasi people. Most of the 1.6 million Khasi speakers are found in Meghalaya, India. The language is also spoken by a number of Khasi people in the hill districts of Assam and in Bangladesh. The language did not have a script, till in the early 1800s the Bengali script was used, mostly for official communication and records. In 1841 a Welsh missionary introduced the Latin script for the Khasi language. In May 2012, the language was no longer considered endangered by UNESCO. 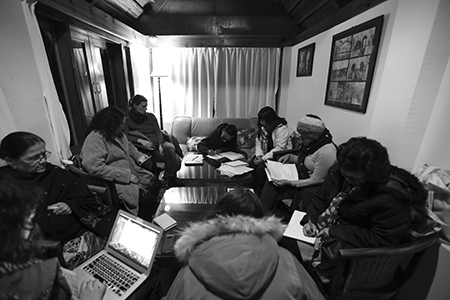 Assamese is an Eastern Indo-Aryan language. It is one of the 22 official languages recognised by the Republic of India and the official language of the state of Assam. It is spoken by over 15 million people. It was the court language of the Ahom kingdom from the 17th century. Along with other Eastern Indo-Aryan languages, Assamese evolved at least before 7th century CE from the middle Indo-Aryan Magadhi Prakrit, which developed from dialects similar to, but in some ways more archaic than Vedic Sanskrit. The language is written in the Assamese script.

On the third evening - the poets, translators and facilitators huddled up together to hear the first drafts of the translated poems. The poets each were curious to hear how their poems had been translated – gender, religion, history, beliefs and more… they prodded and questioned, negotiated and explained, at times frustrated, at points elated, everyone a bit exhausted. After that first sharing, everyone retreated to create and recreate anew.

The next afternoon, we all reached the venue where we were to have our first public sharing. The invitation to the open event said ‘come gather around the hearth’ and so we did. Seated around an open wood fire – the poets shared their poetry and each other’s translation of it. We also spoke about this journey that we were slowly emerging out of. Kerstin said of her poems and the process of them being translated “once I put them out there, they are not mine anymore”. Rebekah the translator from and to German – Khasi, said of the experience that “it was quite unlike any of the processes she has been through in her long career of working with and teaching language”. Wanphrang shared about the process “that it forced and helped him articulate and narrow down in words, rather than alongwith sound and imagery, as he was used to as a filmmaker and musician”. “This is a very new experience for me and I have learned and am learning a lot” said Maitrayee. The people who joined us listened and applauded and asked many questions and aired many concerns – ‘What gets lost in translation? ‘Should we translate?

Later that same night, we descended into the basement of a hotel at the heart of the city, a place called ‘The Evening Club”. We gave the poets a break that night and clinked glasses and settled down before the venue went pitch dark, till a single spot of light focused on the wiry frame of a woman, as the voice of the actor emerged– Lapdiang Syiem, who brought poetry, language, culture - past and present, onto the stage with her new work titled “Reaching out to grasp… roots… I stand uprooted”.
Mary Therese Kurkalang, January 2019