Games and Politics is an interactive exhibition by the Goethe-Institut, in cooperation with ZKM | Center for Art and Media, which has been touring worldwide. The exhibition features 18 significant politically-ambitious video games, and encourages viewers to examine how they each unfold their unique political potential. 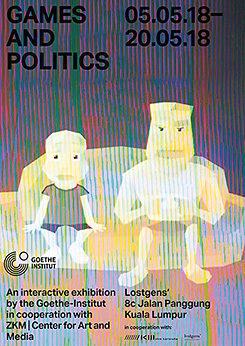 © Goethe-Institut Malaysia The selected games cover a wide range of political and social topics. The political aspect of these games becomes visible to the players either directly as they make decisions affecting social groups and economies to win elections (Democracy 3), or indirectly as they witness social injustices such as precarious labour conditions (Sunset), the treatment of refugees (Escape from Woomera) and address gender issues (Perfect Woman). The games also lead the players to confrontations with the surveillance state (Touchtone) and the consequences of armed conflicts (This War of Mine). Adopting the characters of often-marginalized people, players experience limited possibilities and negative sanctions through both the characters and the game play.

Visitors can also view an introductory film about political games and short documentaries about some of the games. The accompanying exhibition catalogue provides background information on the unifying concepts of these independent games.

Mature themes are addressed in the exhibition.

Sat 5th May 6 pm EXHIBITION OPENING and LIVE PLAYTHROUGH of the game papers, please
The player of papers, please has the duty as a border guard to check the passports and documents of travelers entering the fictitious state of Arstotzka. The right stamp can decide a person’s fate and, by making these decisions, the players become more and more implicated in moral dilemmas. The game was developed by the designer Lucas Pope to illustrate the by far not easy moral processes of border policies.

Sun 6th May 4 pm PUBLIC LECTURE by Christian Huberts: Game World Views followed by LIVE PLAYTHROUGH of Orwell
When playing Orwell the player steps into the shoes of a government secret program that observes a group of assumed terrorists. The secret program uses the internet to check on the people’s lives and the more the story unfolds, the more deeply it penetrates into the most private aspects. Orwell, as also the name implies, asks the question about digital surveillance and the internet as a collector of private data.

Thu 10th May 8 pm  SCREENING of the ARTE documentary series Art of Gaming followed by a Q&A
Art of Gaming is a European series by the TV sender ARTE that explores gaming in terms of the impact they have on society. Two people play iconic games while discussing the history, the ideology or the gender aspects of gaming.
Friday 11th May 6 pm LIVE PLAYTHROUGH of This War of Mine
Playing the role of civilians in a war zone the aim of This War of Mine is to survive as long as possible. Therefore daily tasks to get basic requirements have to be done. Besides the military attacks the civilians live in constant fear of being brutally attacked by criminals and looters. Players will experience the unconsciousness of civil victims of war.

Bazil Akmal Bidin: Incubator Manager at LEVEL UP Inc by Malaysian Digital Economy Cooperation (MDEC)
Casually known as BuZz, he is the former IGDA Malaysia Chapter Coordinator and a game developer that dabbles in programming, production, and game design. His vocation is to grow the local game industry through working with game companies, education institutions, government agencies and other stakeholders of the regional game industry. He is currently the Incubator Manager @ LEVEL UP Inc, a game incubator facility by MDEC.

Jeremy Ooi: Co-founder and game designer at KAIGAN GAMES, Malaysia
Jeremy Ooi is a co-founder and lead game designer of Kaigan Games, a Malaysian based studio that makes narrative games for mobile. He's been making games professionally and personally for the past 6 years with the first project being Malaysia’s very first ever PC title "Hoodwink" back in 2012. Since then, he's worked on and consulted for several games and gamification projects. He is also the co-creator of the popular mobile games Sara is Missing and SIMULACRA both of which won multiple game awards. Besides working on games, he is also an active theatre practitioner, where he sometimes acts and most recently, direct and produce his own indie shows.
Sun 13th May 4 pm WORKSHOP on Reading Rule Systems - understanding the meaning of computer games followed by the DOCUMENTARY Returning Fire and Q&A.
For the workshop please register for free before the 10th May 2018 under following email address: newsletter-programme-kl@goethe.de
While games are widely considered as plain entertainment, their dynamic rule systems are more than just the means to a fun time. Rules can form arguments, create meaning and illustrate complex ideas. Elegant board games like chess or Go are easily deciphered as allegorical depictions of warfare. The very popular game Monopoly was once designed as a tool to criticise capitalist land grabbing. And modern computer games nowadays both deliberately and coincidentally make rhetorical statements about our world. The workshop offers an introduction to concepts for reading and understanding these rule systems – like game scholar Ian Bogosts »procedural rhetoric«.
The documentary Returning Fire forces gamers and non-gamers alike to think critically about what it means when the clinical tools of real-world killing become forms of consumer play. It shows what diving into the world of warfare gaming does with the consumer and how they affect our political culture, and our capacity to empathize with people directly affected by the actual trauma of war.


The exhibition will be opened daily from the 6th until the 20th May 2018 from 1pm to 10pm. On the 9th of May the exhibition is closed.

Christian Huberts, born in 1982, studied »Cultural Studies and Aesthetic Practice« and gained a degree at the University of Hildesheim.
Currently he is a freelance editor for the games bookazine WASD, a curator for piqd.de and has regular appearances as an expert for digital games at culture conferences and workshops. He most recently lectured Game Studies at the University of Applied Science Europe in Berlin and published the game studies anthology »Zwischen|Welten: Atmosphären im Computerspiel« in the Verlag Werner Hülsbusch. In addition he writes articles for newspapers, scientific publications and cultural magazines about the participation in digital worlds and the culture of video games.

The exhibition is presented in Kuala Lumpur by the Goethe-Institut Malaysia and Lostgens’ Contemporary Art Space.