The event industry, and especially live music events, was one of the first sectors of the economy to be shut down in Germany when the coronavirus pandemic began in March 2020. Musicians and fans did not let this stop them enjoying shared musical experiences, however. Digital spaces offered refuge during a time of contact restrictions. Which future prospects do they offer?

Who knows, if it weren’t for the pandemic the world might never have discovered that popstars are just as reliant on vacuum cleaners as ordinary mortals are. Or at least Mine is, as we found out when the Berlin-based musician gathered together the “Quarantöne All Stars”. Together with four fellow musicians, she can be seen on Youtube reinterpreting her song Hinterher. What makes the recording special is that all of them are singing and playing their instruments on their own at home, with technology then being used to combine the sounds as if they were performing normally as a group – and in Mine’s living room a completely bog-standard and very unglamorous household appliance can be spotted in the background. “Hey Mine, we’ve got the same Hoover!”, a certain “storlach” declares delightedly in the comments. “So I’ll soon be able to sing just like you!“

commented a Youtube viewer in 2021 on the new interpretation of Mines song Hinterher.

Mine and her “Quarantöne All Stars”, who rehearsed a total of four songs with up to 36 vocalists, rap artists and musicians and then uploaded them to Youtube in July 2020, are just one of the more prominent examples of artists who did their best during the lockdown to reduce the distance that the hygiene regulations stipulated they must maintain from their audiences. Concerts were streamed via websites and social media, DJs performed in empty clubs so that people could dance in their living rooms at home, and fans and musicians complained in the comment sections about how the lockdown was stressing them out and weighing on their mood.

“It brings tears to my eyes … apart from the goosebumps,”

In many cases this actually brought consumers and producers closer together, as music manager Stefan Habel also observed. “Even artists who had not been especially social media-savvy beforehand realised how important it is to receive acknowledgement as an artist – and social media at least allowed them to enjoy the feeling of applause.”

Although the “Quarantöne All Stars” were a success, their music manager Habels Agentur – which played a key role in their organisation – does not believe that such complicated formats will survive once the pandemic comes to an end. Concerts will continue to be streamed, just as they were before the coronavirus, “as this is the modern-day equivalent of the live DVD for those established artists who no longer wish to perform in every small town. However, everyone will be happy to return to the normal rhythm as quickly as possible. After all, the atmosphere that a live gig offers cannot be reproduced – neither for the artist nor for the fan.”

This is a view that is shared by Christian Weining. Nonetheless, the cultural studies expert from Zeppelin University in Friedrichshafen is working on a model project that is attempting to create a digital concert experience that is as close as possible to real life. Weining is coordinating the “Experimental Concert Research” project in which scientists from universities in New York, Bern, Klagenfurt and Karlsruhe are trying to identify what exactly defines a concert experience. The key question that this music and cultural science project wishes to address is: “What distinguishes a concert from other ways of listening to music?” 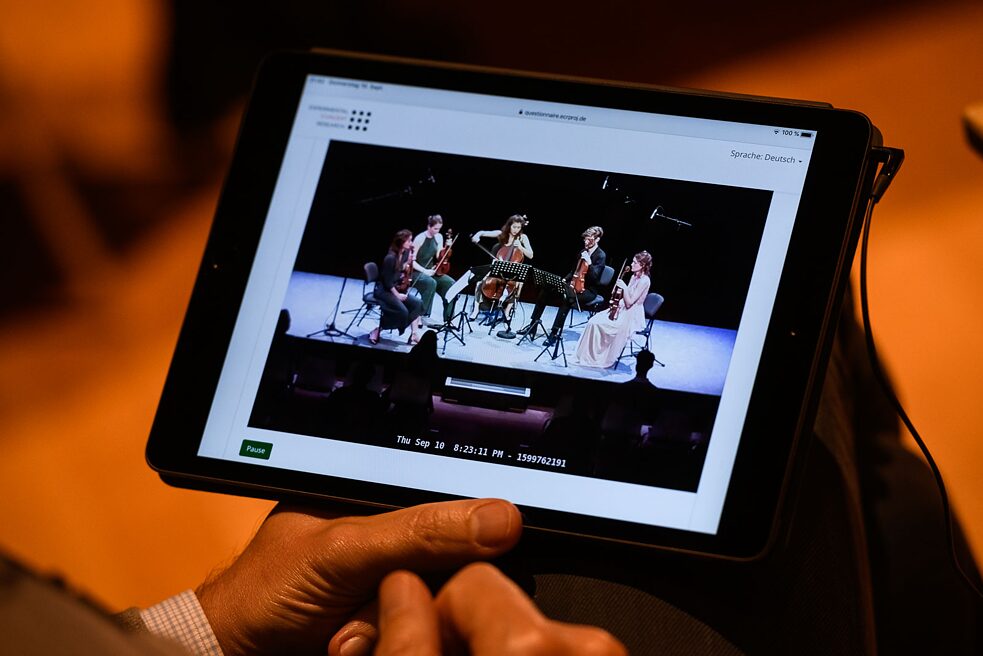 Sneak Peak Yubal Ensemble | Photo (detail): © Phil Dera
When the world was plunged into lockdown, Weining and his colleagues made a virtue out of necessity and conducted their experiment in the digital sphere. A string quintet led by the cellist Alban Gerhardt performed for the “digital concert experience”. When the recording was broadcast, an audience of classical music lovers then gathered in a virtual concert hall. Using avatars they had designed themselves, audience members could use emoji's to applaud or boo, and were also able to use the chat function to engage with those sitting next to them. “Some of the concerts saw some really animated chats”, recounts Weining. As the scientists discovered when they analysed the results, more than half of the good 600 test subjects were delighted to take advantage of the chat function and the virtual cafeteria, which gave people the chance to meet other like-minded concert-goers once the musical programme had finished: “Many of them were pleased to have met other people at last – something that never happens at a conventional concert.”

Since the study's findings were published at the end of 2021, Weining can reveal “that such formats are of interest first and foremost to people who are very interested in music in any case and are given the feeling that they are attending an exclusive event”. When asked to draw some sort of conclusion, the scientist sums up as follows: “It is an alternative but could never be a substitute.” 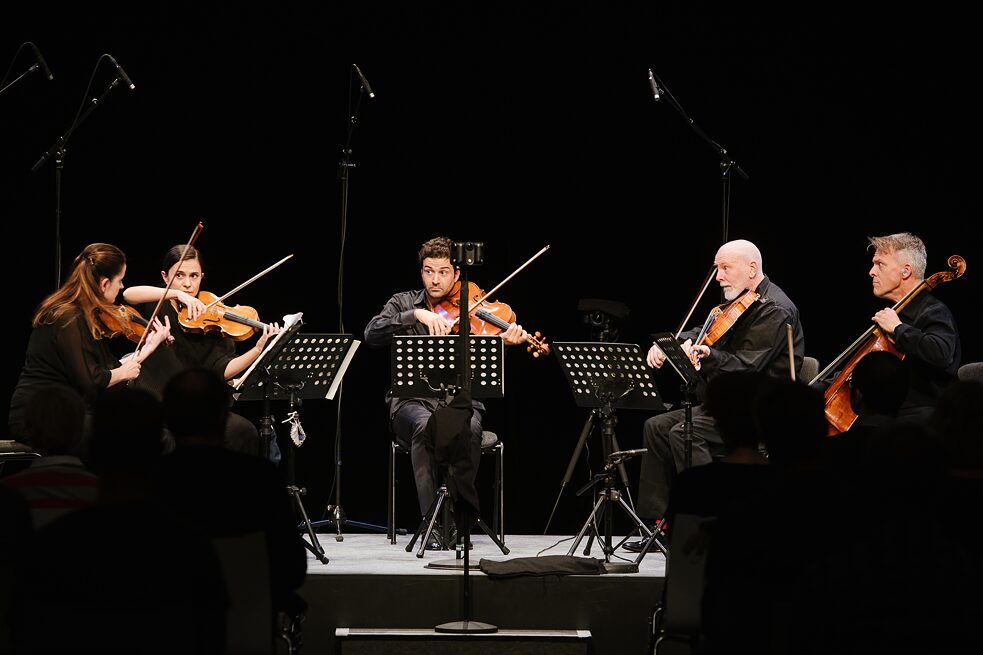 “We are still here!”

This is also what the organisers of United We Stream experienced. A digital platform that was established by the Berlin Club Commission right at the start of the first lockdown in March 2020, it features live streams of DJs performing to empty dancefloors at the city’s world-famous but abandoned clubs. Its primary objective was to maintain contact with club-goers and convey a message to the wider public, namely: We are still here!

This proved so successful that clubs from other cities across the world quickly joined in. These days the initiative is far more than just a streaming website, says Anna Harnes: she describes it as “a decentralised network, a movement, an open source platform” that links over 500 event venues in more than 120 cities in Europe, Asia, Australia, North and South America and has meanwhile managed to drum up more than 1.5 million euros in donations for clubs, artists and the sea emergency rescue organisation Sea-Watch: “The response has been so overwhelming that we are still hardly able to set up the necessary structures quickly enough.”

As Harnes, who is the organisation's chairperson, also points out however: “There is no substitute for human interactions in these clubs, as they also provide a safe haven for women, queers and other minorities.” This is also the reason why virtually no other sector has been as badly affected by the pandemic as the club scene. A party culture that is attractive not least for its excesses, self-staging, licentiousness and the anonymity of the night is hardly compatible with social distancing rules, compulsory facemasks or contact tracing. Reproducing such experiences online remains but a pipe dream.

Thanks to initiatives like United We Stream and the fact that DJs were able to keep in contact with their fans online rather than jetting round the world, “a closer bond has been created plus a greater awareness of what club culture means – and how important it is.“

comments “C-Real“ under the live stream from the club Ritter Butzke in Berlin on 27 March 2020.

Harnes believes that “hybrid dancefloors” have the best chance of playing a role in post-pandemic nightlife, besides the aforementioned closer bond between DJs and club-goers. Experiments are already underway to link up clubs in Manchester and Berlin: in an ideal scenario, the same music would be played in both places simultaneously and dancers could see themselves on huge screens. DJ gigs will also continue to be streamed, though from established providers such as Boiler Room or Hör Berlin, which had already found loyal audiences for themselves even before the pandemic.

United We Stream, on the other hand, will be changing its orientation in March 2022 to mark the platform’s second anniversary. Rather than simply streaming events, it will focus above all on continuing to interlink clubs around the world and promoting exchange within the scene. “We will move away from fundraising and towards a communication and cultural platform that provides space for debating typical club-related issues such as diversity, but also problems in the scene such as precarious employment conditions”, says Harnes. “It was never our goal to replace the live experience, but rather to create something additional. Dancing the night away in a club is simply unique.”

Thomas Winkler has been writing about music, sports, film and everything else that is interesting for three and a half decades, was an editor at taz, zitty and since 2020 at Musikexpress. And he would really like to spend once again a night in a sweaty basement club without being scared.