What is the Common European Framework of Reference for Languages (CEFR)?

Developed by the Council of Europe, CEFR is a framework of reference for teachers and institutions, which intends to make it easier to set learning objectives, make achievements comparable across languages and national educational systems, and facilitate meaningful, learner-oriented progression.

The CEFR differentiates between three major competency levels: A (basic user), B (independent user), and C (proficient user), which to some extent correspond to the traditional breakdown into elementary, intermediate, and advanced. These competency levels stem from the sum of various “can-do” descriptors that describe the linguistic actions that the learners should be able to master. They are positive statements formulated with the intention of covering all linguistic activities and forms of interaction. They encompass qualitative and quantitative aspects: the repertoire, the degree of accuracy, the situation, and the context. Can-do descriptors apply to all four competency areas: speaking, listening, reading, and writing.

Global Can-do descriptors according to level

© Council of Europe How do CEFR and ACTFL scales compare?
Whereas in Europe, foreign language instruction is based on the CEFR, the American Council on the Teaching of Foreign Languages (ACTFL) scale dominates in the United States. Both reference systems are designed so that they can be applied to different groups of learners and institutions. One of their objectives is to help teachers come up with performance tasks that correspond to the respective language level and simulate realistic, authentic situations. Both reference systems thus serve to promote teaching that focuses on action and skills.

Similarities
The can-do descriptors from the framework of reference can be interpreted as corresponding to the ACTFL Performance Descriptors. For example, the framework of reference for “Reading A1” says: “Can understand and use familiar everyday expressions and very basic phrases” (Council of Europe, 2001), whereas the ACTFL performance descriptor for Interpretive Communication at the Novice range is described as: “I can identify the general topic and some basic information in both very familiar and everyday contexts by recognizing practiced or memorized words, phrases, and simple sentences in texts that are spoken, written, or signed” (ACTFL: Can-do Statements).

Differences
The CEFR levels describe four language skills: speaking and writing (productive skills) as well as reading und listening (receptive skills). When there is an exchange, we call it an oral or written interaction. If no direct exchange can take place due to language barriers, language mediation becomes necessary. This includes interpreting or summarizing a text that is not easy for others to understand.

The focus of ACTFL Guidelines is on the communicative function of the skills and the intention of the person communicating, resulting in the three modes of communication: interpersonal (the productive skills in an interaction), interpretive (receptive skills), and presentational (writing and speaking in one-sided communications). 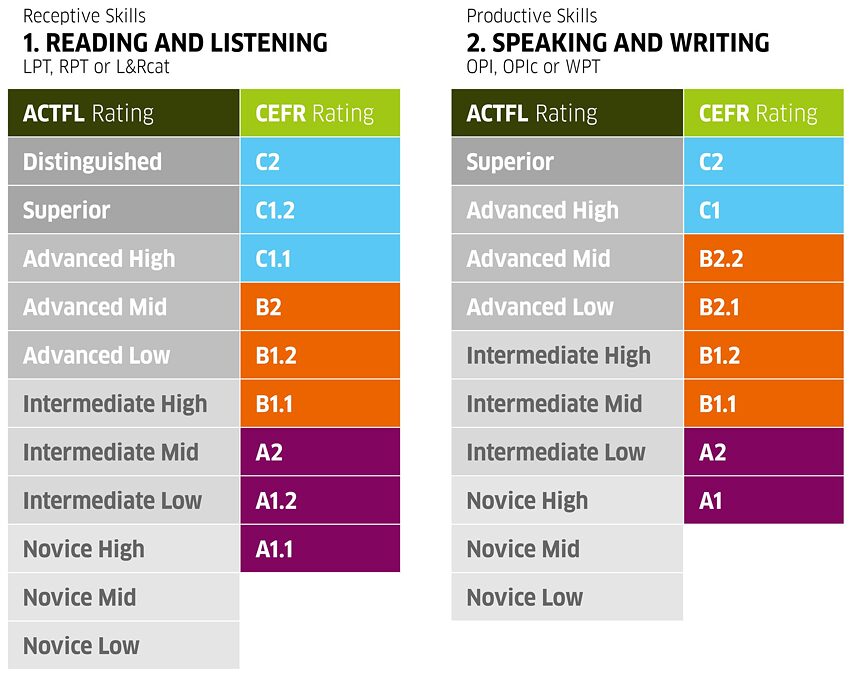