Rosetta – pictures from the comet

It took ten years for space probe Rosetta to reach the Churyumov–Gerasimenko comet on 12th November 2014 – 500 million kilometres away from the Earth. Comets are best known for their characteristic tails. But this time, scientists were particularly interested in the comet’s icy core.

The special camera on board the space probe was developed by Max-Planck researchers and it transmitted spectacular pictures back to Earth. It took the data precisely 28 minutes and 20 seconds to travel through space. Nobody had seen such details ever before. Even with the best telescopes they would not be visible from the Earth. 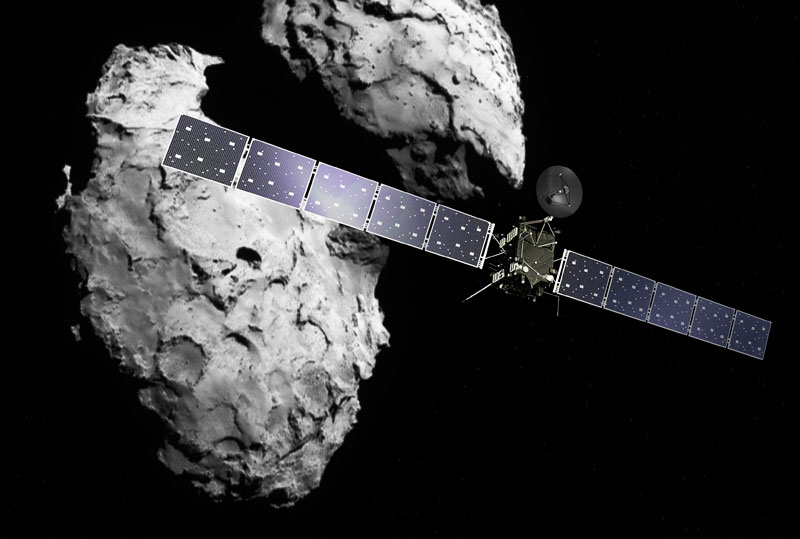 But in 1999 this limit was exceeded: the STED microscope developed by Stefan Hell, a physicist from Göttingen, shows details just a few nanometres in size. The trick is to illuminate the minuscule structures, and then switch off part of the light they are radiating back using a special second beam of light. This prevents the structures – which are located very close together – from emitting light that overpowers each other.

One nanometre is 0.000000001 metres. That makes the STED microscope between ten and a hundred times more powerful than a traditional optical microscope.
» Watch the clip "STED - Insights into the Nano World"

Protein structures of a cell, seen through a STED microscope…

…and through a conventional microscope.

Protein structures of a cell, seen through a STED microscope…

…and through a conventional microscope.

How do we think, feel and learn? These questions can only be answered if you have an accurate understanding of the structure and function of the brain. To achieve this you have to make individual neurons and their activities visible. At the end of the 1980s biophysicist Winfried Denk made further developments to the optical microscope to create the two-photon excitation microscope:

A laser sends photons, or light particles, into the sample in such a way that they overlay and intensify at a precisely defined point. Amongst other things, this enables researchers to see about a millimetre into the living brain tissue, and therefore observe the brain directly whilst it is “at work”.

The new optical microscope technique offers huge potential, particularly for brain research. The thing is, unlike electron microscopy it can be used to examine living cells and tissue. 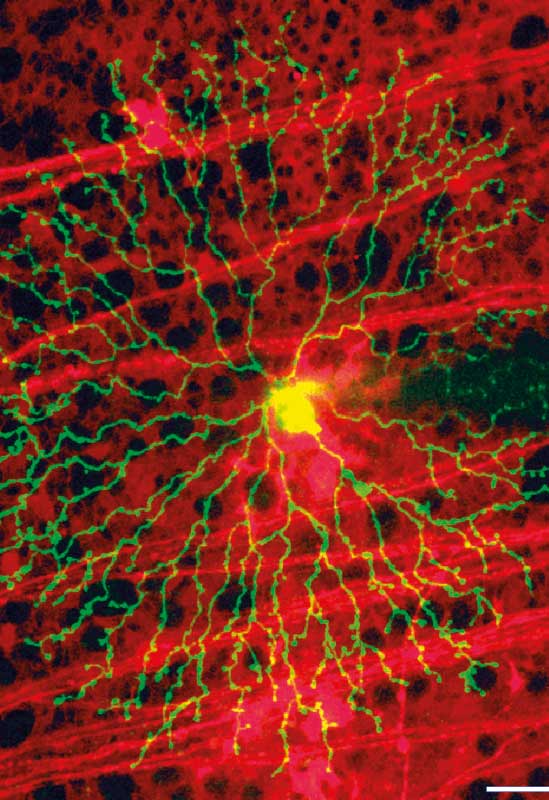 The discovery of viruses

Ebola, AIDS, smallpox, measles, influenza – many dangerous diseases are transmitted by viruses. Nevertheless it was a long time before researchers were able to identify these disease pathogens. The reason: viruses are tiny, much smaller than bacteria. Viruses are not visible under the classic optical microscope.

It was not until the invention of the electron microscope by German physicist Ernst Ruska in 1931 that we were granted a glimpse of the nano-world. Instead of light, Ruska used short-wave electron beams. He worked together with his brother Helmut Ruska, a medical doctor, and they were the first to observe and classify viruses accurately. Ernst Ruska received the Nobel Prize in Physics in 1986 for his invention.

Modern electron microscopes achieve a resolution of up to 0.1 nanometres and allow accurate analysis of proteins, for instance.

Ernst Ruska at the electron microscope, around 1955 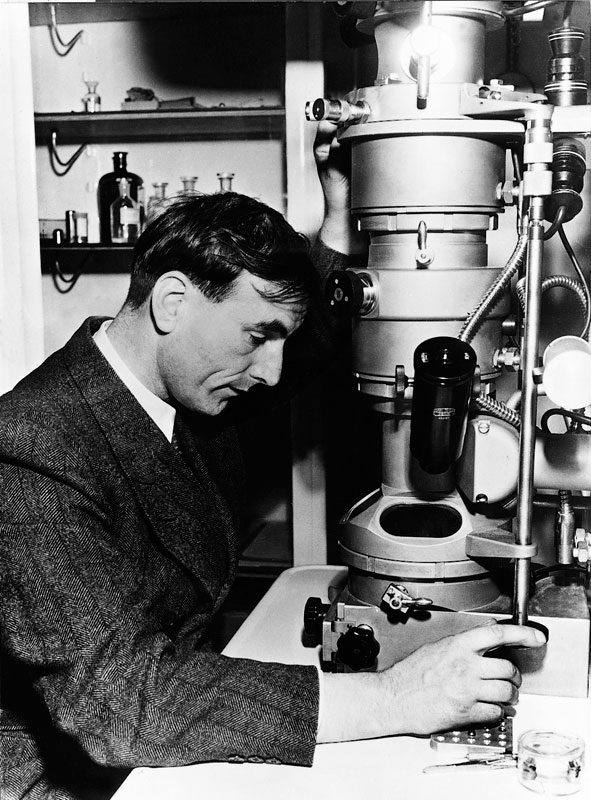 Ernst Ruska at the electron microscope, around 1955 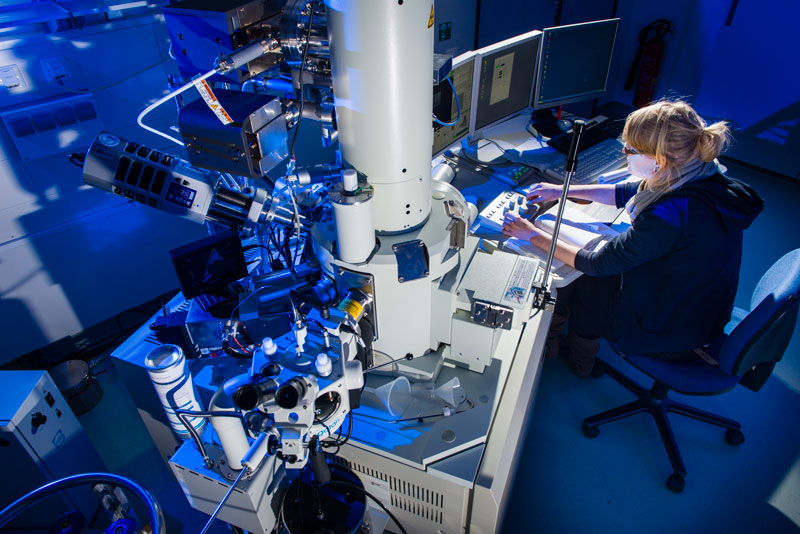 In 1846 Johann Gottfried Galle, an astronomer from Berlin, discovered the planet Neptune. The telescope that he used for this was the absolute best in its day. It came from the workshop of Bavarian optics specialist Joseph von Fraunhofer – at the start of the 19th century he was the only one able to produce high quality lenses without striations and bubbles.

Modern telescopes are many times more efficient: the Very Large Telescope (VLT) for example, which is made out of four large telescopes connected together, would be able to detect car headlights as two separate points of light even if the car were driving on the moon. Max-Planck scientists are currently using the VLT to research the black hole at the centre of our Milky Way.

The Very Large Telescope (VLT) in the Chilean Atacama desert 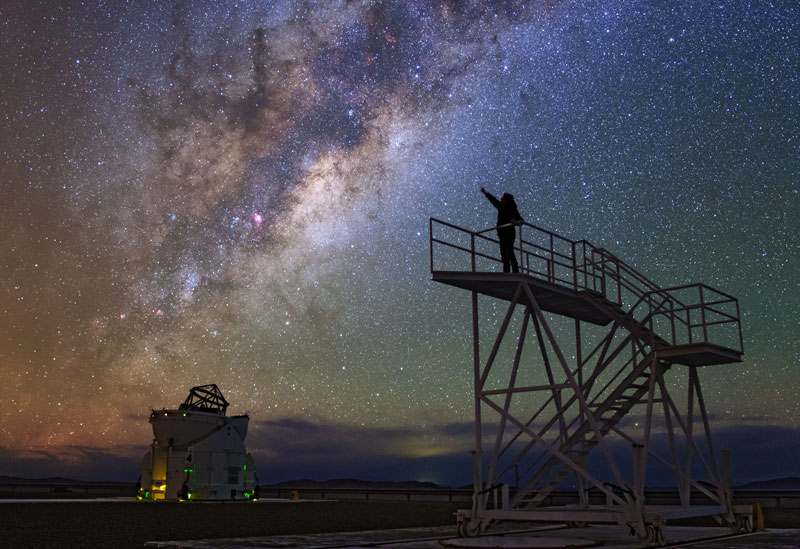 The Very Large Telescope (VLT) in the Chilean Atacama desert