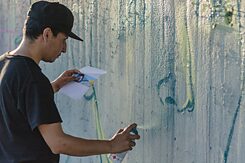 As a way of celebrating life and femininity, the Mexican artist Hech Uno made an artistic intervention on a wall of the Urban Art Hall in Germany that depicts the face of a woman with red lips who is looking toward the horizon, with hands and geometric figures adorning a wall that is green as water.
This work is called Magnetismo (Magnetism), a mural on which we see a girl who is playing with her hands and manipulating her reality, unraveling the background and interacting with three spheres. Hech’s work is focused mainly on female figures, so this piece is unlikely to be any exception; “In Magnetismo I use color and elements such as the face, hands, and geometric figures to represent the source of life”, he explains.