Authors of electronic literature are drawn to experimental writing, exploring radical deviations from linear print forms. With the emergence of AI, it should come as no surprise that e-lit authors have combined these technologies with their creative practice.

‘Programmable’ narratives are nothing new, though. Nor are they dependent on computers. Italian author Italo Calvino’s 1973 novel, The Castle of Crossed Destinies, uses the laying out of tarot cards to generate multiple narratives. In this sense, the tarots are a machine for constructing narrative.

In his novel, Calvino simply illustrates a few examples of this machine-generated narrative in action. His machine is ‘hand-cranked’, that is, it remains hypothetical. With the invention of the computer and artificial intelligence, however, this algorithmic thought can now be realised. 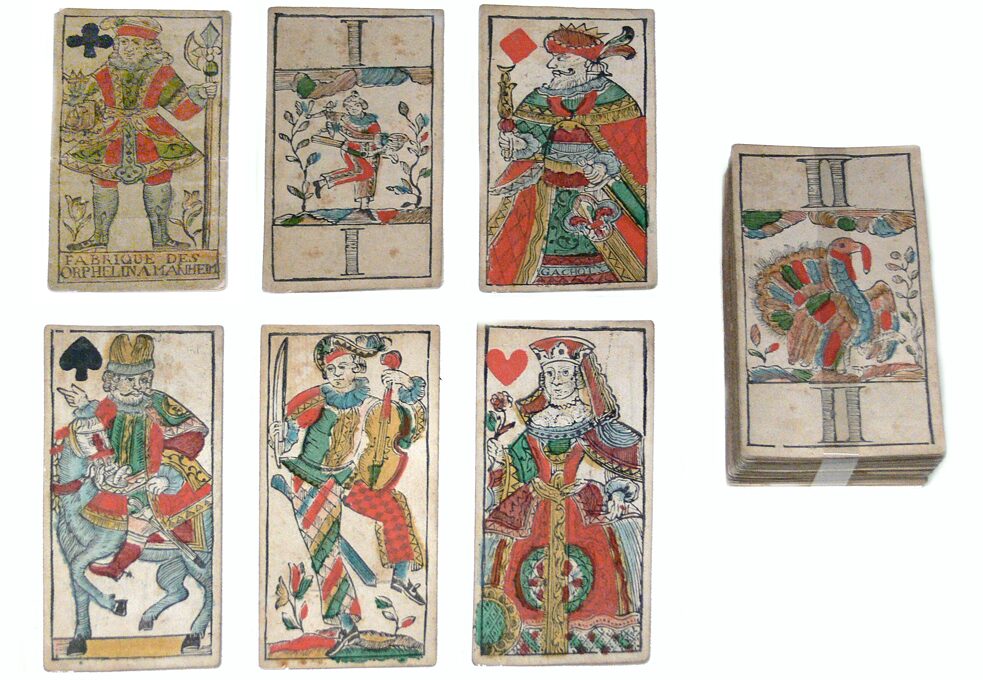 Programmable storytelling: Italo Calvino used tarot cards in one of his books in 1973 | © Andreas Praefcke
Turn the pages another 45 years and things in this area have really progressed. It’s not surprising, considering the boom in computing power in that timeframe. From 2017 to 2018, digital poet David ‘Jhave’ Johnston developed a project called ReRites. Each month, he produced a book of poetry using AI. Neural network code adapted from machine-learning libraries was ‘fed’ with ‘human literature’, that is, a contemporary poetry corpus. With neural net augmentation, a ‘block’ of artificial intelligence text was generated.

Jhave compares these ‘blocks’ of text to stone. Extending this metaphor, he describes his cursor as a ‘chisel’. The incomprehensible blocks of AI-generated text were ‘human-edited’ or ‘carved’. The resultant poetry is co-written by human and machine, but AI serves as the beginning of Jhave’s creative process. 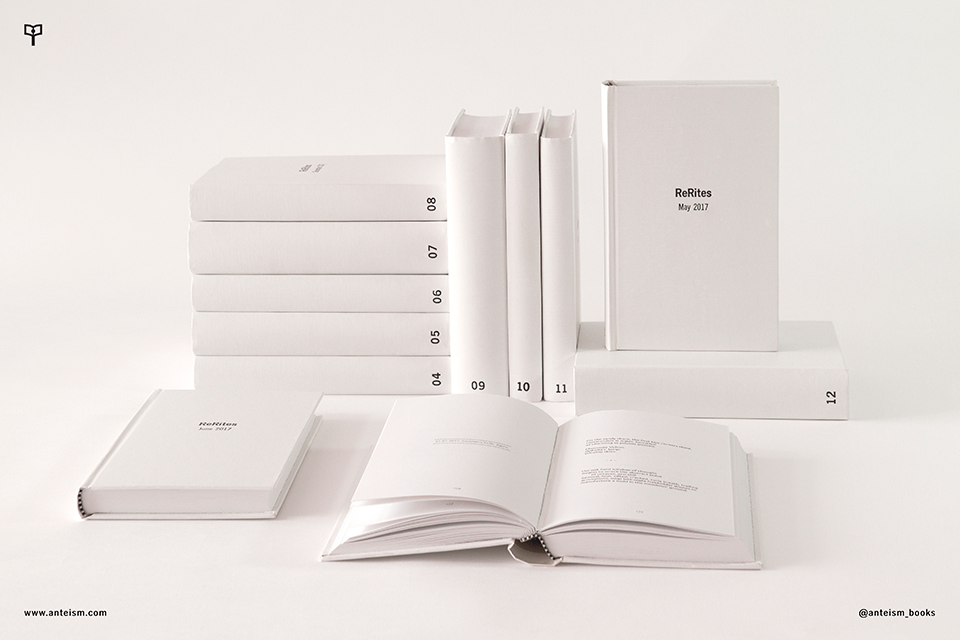 Another mode of creative practice

Jhave’s core claim is that neural nets empower and nourish limited human creativity. As he says on his website, “the digital pattern-devouring process of assistive technology not only operates at a far faster rate than humans, but the silicon neural nets’ capacity to ingest data is vast, and their energy (capacity & consumption), relentless.” It’s important to note that utilising artificial intelligence in the creative process does not necessarily suggest a relinquishing of power or control on the author’s part. Rather, it represents another mode for creative practice and inspiration.

The ‘readers’ of The Readers Project use code to perform “reading behaviours that are meaning-generative.” Currently there are half a dozen readers that have been deployed on various texts. Each reader has its own unique code that determines its behaviour. For example, the “perigram reader” decides what to read next by not only looking to the right, as is typical in Western reading practice, but also to the words immediately above and below. 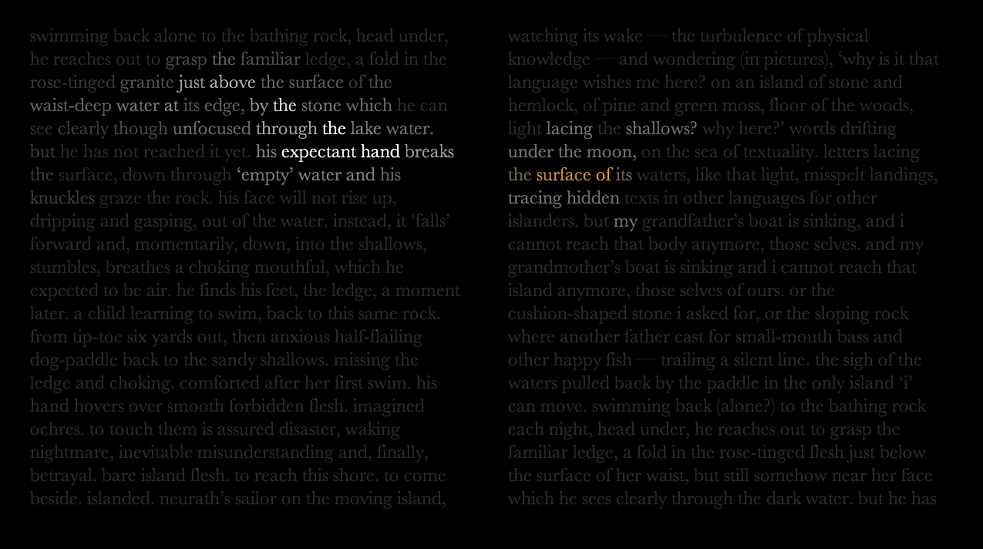 "The Readers Project" used AI to develop new reading techniques | © John Cayley
The texts these readers produce are not simply a random selection of words, but, Cayley and Howe argue, worth reading. The Readers Project therefore critiques conventional reading habits.

While almost all contemporary text – from emails to reprints of Homer’s The Odyssey – is digital, we still operate along conventional writing and reading typographies and formats. These conventions continue due to tradition and habit. Yet the digital world offers multiple other possibilities. These algorithmic readers show us the potential future of our reading habits. An additional work published in 2020, a remix/rewrite of The Future of Writing by Vilém Flusser, from John Cayley and Sally Qianxun Chen, imagines the development of a related algorithmic reader that moves through Cayley’s rewriting, briefly removing words on the surface of the screen to reveal the “words, phrases, and sentences by Vilém Flusser which underpin the rewrite.”

Like The Readers Project, The Library of Nonhuman Books by Karen ann Donnachie and Andy Simionato reads human literature in order to create new, computer-generated texts. A “reading-machine” is presented with pages of human texts: everything from Complete Book of Chess Openings by Fred Reinfeld to Fifty Shades of Grey by E.L. James. Using artificial intelligence, the reading-machine employs a process of erasure to algorithmically remove text. It is programmed to search for syllable-based meanings, similar to that of a haiku. Based on the resultant text, an internet search then retrieves an image to illustrate the page.

This process is repeated for every page of the book. After this has been completed, the ‘new’ book is printed, adding yet another volume to the Library of Nonhuman Books which can then be purchased from a website. As with Jhave’s ReRites, this digital project combines human and nonhuman elements. This project, however, differs in that the resultant text is quite explicitly and deliberately “nonhuman.”

Donnachie and Simionato propose that their conceptual project serves as a speculation on the future of books and reading. It imagines a “post-literate society” that defers the labour of reading to nonhuman entities. The works themselves also propose new meanings, hidden within the human text.

There is often a temptation in reading and engaging with computer-generated works to regard them as nonhuman. Certainly, the computer code that underpins so much of contemporary existence (including the code that determines how this text and web page is displayed) is not human language. Yet utilising the machine and artificial intelligence to inspire or interpret the work does not necessitate the relinquishing of the human.

In all of the works discussed, the human remains requisite for the work to have meaning. If the human is no longer required as a writer or a reader in future digital works, then perhaps we have to question what we even mean when we use the word ‘human.’

American novelist Don DeLillo probably said it best in a letter written to one of his contemporaries: “If serious reading dwindles to near nothingness, it will probably mean that the thing we’re talking about when we use the word ‘identity’ has reached an end.”

Learn more about David Wright's views on the future of creative AI here.

David Thomas Henry Wright has won multiple literary prizes and been published in various journals. He has a PhD (Comparative Literature) from Murdoch University in Western Australia and has taught at China’s Tsinghua University. He is currently co-editor of “The Digital Review” and Associate Professor at Nagoya University in Japan.