With the introduction of the time factor into media art, standstill has become a possibility. For our dossier, writer Esther Bourdages talks about this exciting new aspect of contemporary art.

As German musicologist Helga de la Motte-Haber highlights in her monograph Rolf Julius, Small Music (Grau) (1995), it was during the 20th century that the arts entered a new form of interactivity. Crossovers and alliances between mediums helped to decompartmentalize boundaries and opened up the possibility of including space and time as an artistic component. As such, artworks come alive within a flexible framework that can integrate all kinds of temporality, including the complete stop.

With science and technology, some artistic forms have endowed movement with matter — either through physics or chemistry — thus giving rise to kinetic art, op art, robotic art, video art, digital art, media art, et cetera. These dynamic art forms are bound in time and space, but they also need to be viewed over a longer period of time.

Instead of following the pace of machines, some artists appropriate technologies and propose avenues that question the frantic pace of productivity in industrial society. This article examines artistic research that is removed from technological efficiency, emphasizing slowness until the subject comes to a complete stop.

Throughout history, artists have enjoyed hijacking machines. This is the case of Swiss artist Jean Tinguely (1925-1991), whose kinetic metal sculptures take on an air of absurdity. Some pieces exhibit constant repetition of the same motion turning idle, while others cause slowness or a breakdown in action. Other times, such as in Homage to New York (1961), artistic environments are programmed to self-destruct. Swiss art historian Jean-Pierre Keller points out that, throughout his career, Tinguely was able to realize 1,001 variations of a single machine. A machine to stop time, perhaps?

Time is key in Tinguely’s work. In a number of his manifestos, which focused on the democratization of art, he put forward movement as an artistic component. In March 1959, he issued 15,000 copies of Für Statik [For Statics] throughout Düsseldorf. The manifesto was an ode to appreciating the present moment and remaining static with movement because, according to him, it is the only stable thing.

“Everything moves, there is no standstill. Don’t be influenced by surviving customs. Drop the hours, seconds, and minutes. Stop resisting change. Be in time — be static, be static — with movement.”

Art that asserts itself in the present moment, such as kinetic art, can keep the audience’s senses on edge. In a room filled with Pol Bury’s slow, kinetic sculptures, art historian Rosalind Krauss recounts, “...in the silence, one feels... the creaking of strings... forms an environment designed to keep the senses alert...” (Krauss, 1997).

Maintaining a close relationship between images and sounds, the works of German artist Rolf Julius (1939–2011) require focused attention on the production of musical pieces comprised of small, minimal sounds derived from the materiality of amplified objects. The acoustics of places are sometimes included in his art, as exemplified by Concert for a Frozen Lake (1982). The audience walked on a frozen lake in Berlin while listening to a track that played music of a frozen lake through small speakers. Room of Stillness shares a similar sense of tranquility: Julius conceptualized a calm space with an atmosphere of stillness using art or music, or both together, where visitors were invited to retire and rest by themselves. The artist imagined an entire world covered with a network of these spaces of “active stillness” — that is, very bare areas of calm conducive to experiences of visual arts, listening, and concentration. 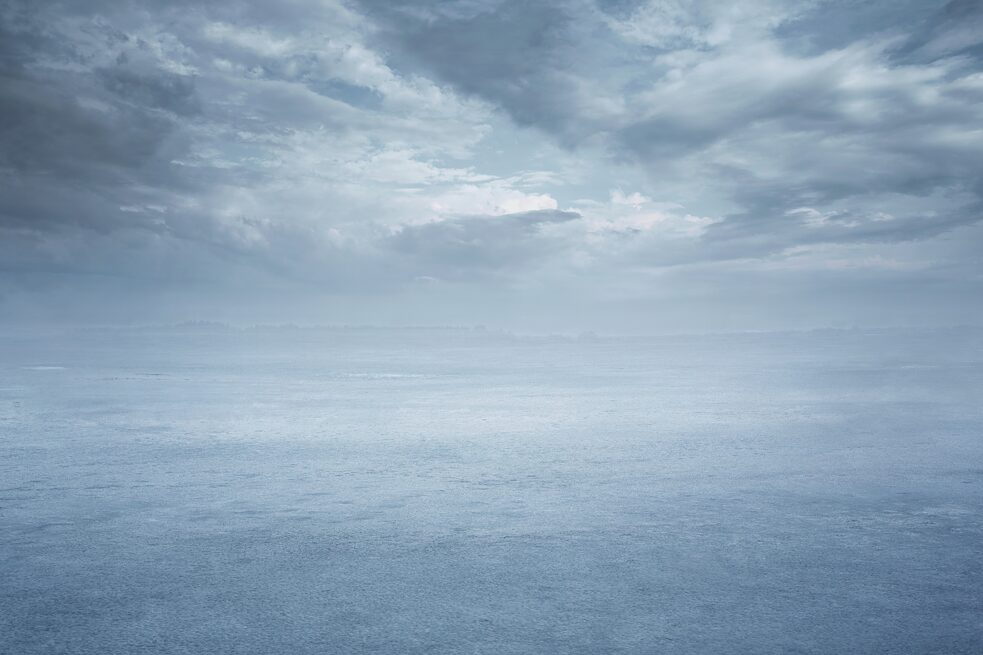 Meanwhile, a white screen displaying nothing reveals the complete stop, the disappearance of the image. Playing with the duality of the presence and absence of images, the photographic series Drive-In Theaters (1978–) by Japanese artist Hiroshi Sugimoto (1948–) features cinema and drive-in screens that give the illusion of emptiness. In truth, these shots of very bright white screens uncover the reality of the photographic lens, which captures all the images of a projected film on the same frame. Accumulated time, compressed in an image, unveils an absent work that leaves an imprint of light.

Today, technology is a major part of everyday life. The world has countless networks that host a continuum of data operations. Faced with the pervasive use of computers, telecommunications objects, and social networks, American artist and author Jenny Odell pushes for a disengagement from economic attention in her book How to Do Nothing: Resisting the Attention Economy. Instead, she advocates for a reengagement with time and space, or “placefulness,” which “yields sensitivity and responsibility to the historical (what happened here) and the ecological (who and what lives, or lived, here)” (Odel, 2019).

Some independent cultural organizations resist technological ubiquity. Between 2019 and 2021, AdaX, the feminist artist-run center dedicated to technological arts in Montreal, took a critical stance with its Slow Tech series, which focuses on three main areas: environment, temporality, and interactions (insofar as these interactions are connected with local places and concrete people).

In February 2022, in the wake of Slow Tech, U.K.-based artist Yoojin Lee shared her research on sleep. Motivated by our pervasive and endless hyperconnectivity, she reflects on the interdependencies between people and “light technologies” using video, installations, and writing. As Long as There Is Time to Sleep explores the theme of sleep and its incongruous endurance in a constantly illuminated world.

According to the artist, the act of sleeping has become naturally incompatible with the interrupted world of operation demands; rather, sleep embodies a form of individual and universal resistance. 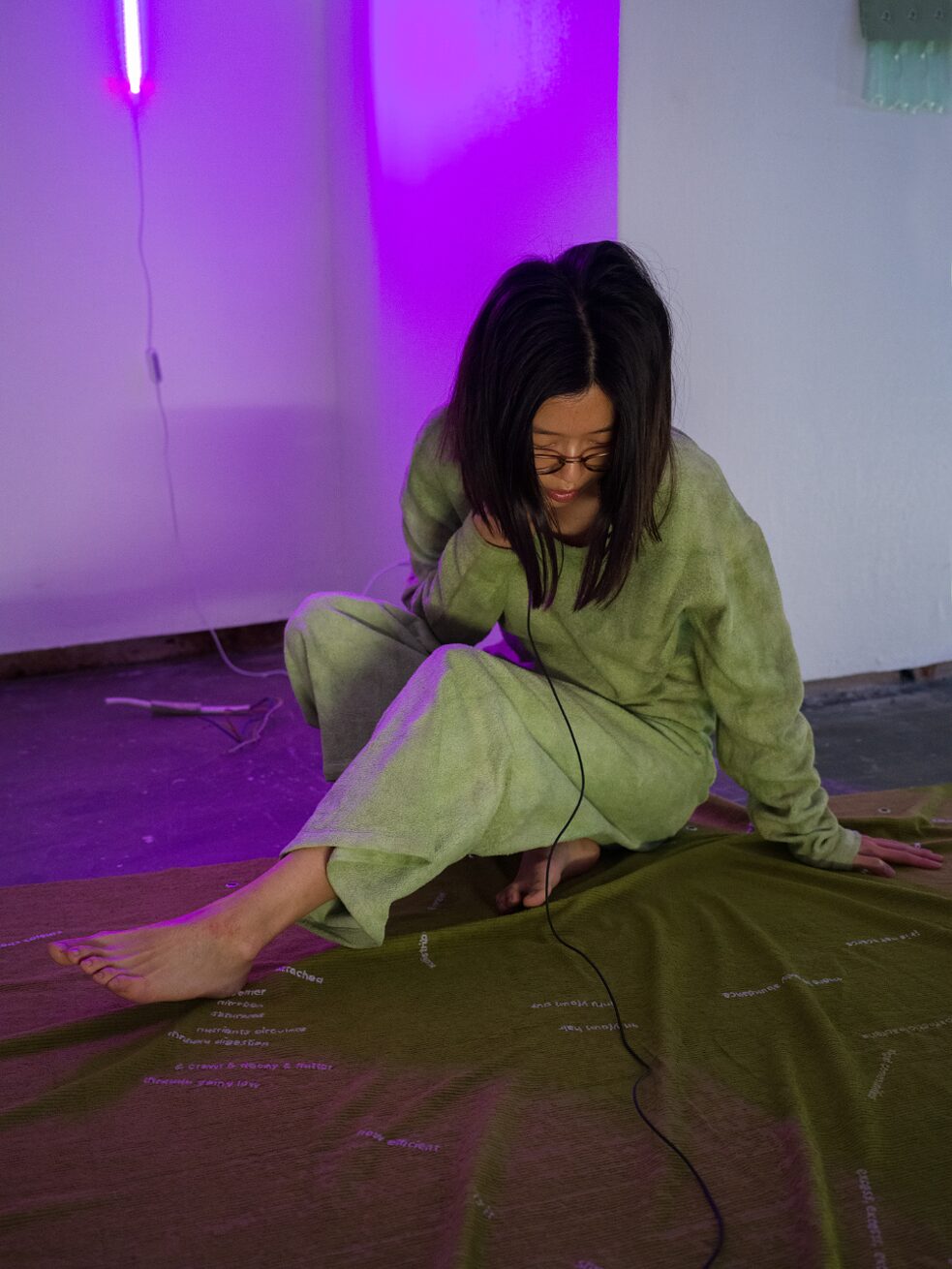 Yoojin Lee, slowth (habitats), 2020 | © Image courtesy of Yoojin Lee and Titanik | Photography by Hertta Kiiski Amongst others, she bases her studies on the philosophy of American author Jonathan Crary who examines the “time of indifference.” This type of all-consuming productive time “denies the fragile rhythm and texture of human life. It imposes the absoluteness of availability and the ceaselessness of needs and their incitement but also their perpetual non-fulfillment” (Lee, 2016).

Lee encourages us to reconsider the act of sleeping, to reclaim it, to enjoy it. She goes on to emphasize presence: “A sleeping body, a sleeping being is vulnerable and intimate, but at the same time, very present.” Through evolving technological works, artists teach us to be aware of the present moment and also to distance ourselves from the linear time of productivity in order to move into a space-time of escape, maybe even isolated and motionless.

Esther Bourdages works in the fields of visual arts and technology art as a writer, independent curator, and scholar.

Stillness in Modern Dance The Power of that Textured Repose