Painted in his famously photographic or hyper-realist style, Riyas Komu’s portraits of migrants from different countries and lines of work in Gulf cities force the viewer to do a doubletake. What does it mean to conceal the painterliness of these images behind the appearance of their smooth and almost mechanically produced surfaces? Some of his figures are depicted gazing into the distance against a metallic blue background, perhaps the cloudless sky of their desert clime. Others seem to be looking at a camera with the familiar poses and expressions of photographed subjects the world over. 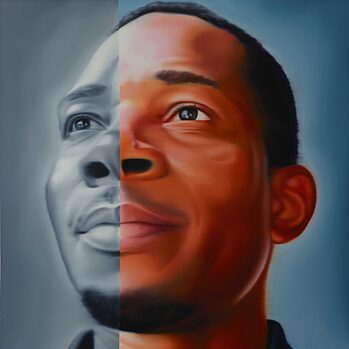 Painted in his famously photographic or hyper-realist style, Riyas Komu’s portraits of migrants from different countries and lines of work in Gulf cities force the viewer to do a doubletake
By Faisal Devji 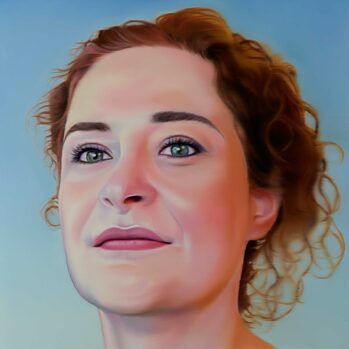 Migration and exile, in many ways, structure my feelings about and understanding of the world. Many images in my works deal with it frontally, while in many others it is latent, often as enfolded or suggestive layers.
by Riyas Komu

Riyas Komu | a critically acclaimed multimedia artist and curator based in Mumbai. 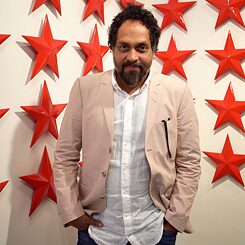 © Riyas Komu His works are inspired mostly by social conflicts, political movements, migration, governmental policies, sport, marginalisation and displacement. He is also into publishing and writing about art and subjects that spark his imagination. Personalities who have influenced his work include Mahatma Gandhi; BR Ambedkar, a crusader against discrimination who was also the main architect of the Indian Constitution; and sportsmen, especially football stars, famous and lesser known ones, all of whom have played against insurmountable odds.

He is widely travelled and has given numerous talks at global forums on art exhibitions and curation.

An alumnus of Sir. J.J. School of Art, Mumbai, where he did his bachelor’s and master’s in painting (1999), Komu has invested a lot of time over the years in art education and in developing art infrastructure in India. It was Komu who conceived the idea of the Kochi-Muziris Biennale (KMB), India’s first art biennale. Later in 2010, he co-founded the Kochi Biennale Foundation. He also co-curated the first edition of KMB in 2012 and has been Director of Programmes of KMB multiple times (2012, 2014, 2016). In that capacity, he initiated affiliated projects like the Students' Biennale, Children's Biennale (later named as ABC, Art by Children), Artists Cinema, Music of Muziris, Video Lab, Let's Talk series & History Now (Talks and Seminars), Pepper House Residency & Exhibition and so on.

Komu has been Advisor and Visual Arts Curator for the Serendipity Arts Festival in Goa in 2016 and also in 2017. He has done extensive research trips in the sub-continent, even to interior spots of war-torn Afghanistan, and later conceptualised and curated the 'Young Sub-Continent' project in consecutive years starting from 2016 to 2018 in Goa. He curated the Kondotty Sufi Festival in 2019.

As the founder of URU Art Harbour, a cultural hub at Mattancherry in Kochi (Kerala), Komu has curated several exhibitions to promote artists from the region. He focuses zealously on local culture, Kerala's history of social action, human migration and maritime history. URU Art Harbour provides a well-supported artist in residency programme which includes exhibition. It also engages with international artists.

His activism however has never held him back from his artistic pursuits. Besides numerous other shows, some of his solos are Faith Accompli, Mark Him, Related List, Safe to Light, Holy Shiver and Out of Place. Komu's works have been widely exhibited in countries such as South Africa, Brazil, France, Germany, UK, Italy, Korea, Indonesia, Pakistan, Bangladesh, Sri Lanka, USA, China, UAE, Belgium, the Netherlands and Iran, among others. As a sculptor and painter, he has earned a name as one of India’s most watched political artists who doesn’t shy away from exploring implosive social realities and the skewed political priorities of interested parties.

Komu, who spent one full month in South Africa during the 2010 football world cup and tried to understand the "rainbow nation" at close quarters, later made a statue of Ambedkar, an Indian symbol of resistance, to be installed at the "Cradle of Humankind" near Johannesburg. For someone who has done several projects around football and Gandhi, Komu’s hyper-realistic oil portraits of people resemble socialist-realist propaganda art.

Komu was acknowledged very early at home and at international art summits. In 2007, the Kerala-born artist was one of the two Indians selected for the 52nd Venice Biennale by noted curator Robert Storr. Later, he went on to be part of the Iranian Pavilion at the Venice Biennale in 2015. By then, he had already shown his works at the Jogja Biennale, Indonesia, in 2011. Recognitions for his dynamism and experimentalism are too long to narrate.

Extremely socially conscious, Komu is fascinated with history and contemporary socio-political events and trends. He is currently working on a project on the Indian Constitution titled "Aesthetics of Neighbourhood".

Back to Love, Labour, Leisure