Within the framework of Germany’s appearance as Guest of Honour at the Abu Dhabi International Book Fair 2021, the Goethe-Institut in cooperation with Frankfurter Buchmesseorganized a series of digital talks with authors, experts and artists from Germany and the MENA region as well as an exhibition about Johann Wolfgang von Goethe.

Ulla Lenze and Hisham El Kheshen exchange their ideas about working with historical material for their latest novels. In her latest novel The Radio Operator, Lenze tells of a very special kind of spy. Based on a true story it is the fictional story of the author’s great-uncle who becomes embroiled in a Nazi spy ring operating in New York City in the early days of World War II. El Kheshen’s bestselling novel It Happened in Berlin follows the lives of two families separated by ideologies and politics and connected through blood and the changing ownership of a priceless Stradivarius violin.

Ulla Lenze has been writer-in-Residence in Damascus, Istanbul, Mumbai and Venice. In 2016, she received the Prize of the Cultural Committee of German Business for her complete oeuvre up to date. Her novel The Radio Operator (2020) has been translated into ten languages.

Hisham El Kheshen is an Egyptian author and novelist whose literary works include two short story collections & seven novels. He is best known for his social history novel Graphite, which was longlisted for the International Prize for Arabic Fiction in 2014. His newest work The Gang of Lebon (2020) is currently being turned into a movie.

Moderator Eman AlYousuf is an Emirati writer, researcher, and lecturer in cultural diplomacy. She has published three novels and three short stories. 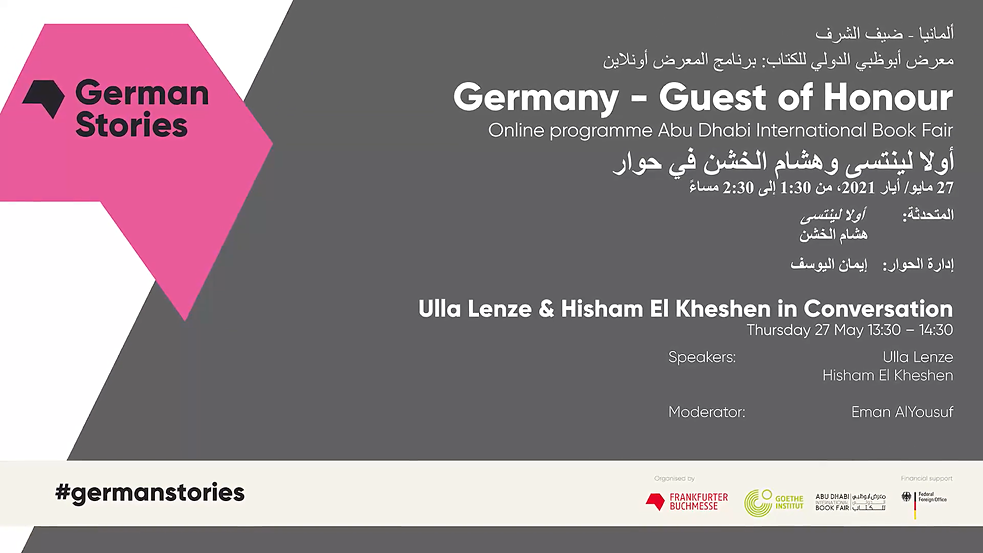 Ground Zero is not just the site where the World Trade Center once stood in New York, Ground Zero is the zero point of our present and its global conflicts. For Stefan Weidner, the story of 9/11 only ends when we free ourselves from the ideological shackles of the past two decades and try to rethink our world from scratch. The pandemic, of all things, opens up the opportunity to dissolve destructive thought patterns and to take a look at a better future. Stefan Weidner speaks with Bilal A. Qureishi about his latest book, Ground Zero – 9/11 and the Birth of the Present.

Stefan Weidner has published several volumes of fiction, travel writing and essays and translated the works of many Arab authors such as Adonis, Mahmoud Darwish and Ibn al-Arabi.

Moderator Bilal A. Qureshi is a multimedia journalist with an interest in the intersection of politics, history, and culture.

Germany and the ‘Orient’

Historian and journalist Joseph Croitoru talks with Omar Ghabash and Stefan Weidner about German views and attitudes towards Islam and the so-called Orient, from the 18th century and the Age of Enlightment until today.
Joseph Croitoru is a historian, journalist and author. He is a permanent contributor to the F.A.Z. feuilleton, specialising in the Middle East and Eastern Europe.
Moderator Stefan Weidner has published several volumes of fiction, travel writing and essays and translated the works of many Arab authors such as Adonis, Mahmoud Darwish and Ibn al-Arabi.

The Power of Words

Bestselling author Pierre Jarawan started his literary career as a slam poet. He speaks with Emirati award-winning spoken word poet and scholar Dr. Afra Atiq about the power of writing of both slam poetry and fiction. They will also be discussing the respective slam scenes in Germany and the UAE, possible differences in the rules and topics and advantages and disadvantages of the respective genres for the author.

Pierre Jarawan, born in 1985 to a Lebanese father and a German mother, has won international prizes as a slam poet and is the author of bestselling novel The Storyteller.

Dr. Afra Atiq is an Emirati award-winning poet. She has a master’s degree in diplomacy and has been a featured performer and speaker on multiple platforms.

Maqamat − Rogue Stories and the Travels of a Trickster

This talk will concern the Middle Eastern literary form known as the maqāmāt. The maqāma tale form was invented in the tenth century in eastern Iran by Badīʿ al-Zamān al-Hamadhānī (d. 1008). The classical maqāma, typified by the works of al-Hamadhānī and his first imitator, al-Ḥarīrī, who lived a century later, is often about begging or picaresque themes—that is, the roguish theft of money from others. The term maqāma is often translated as “assembly” in English or “séance” in French, but a more sensitive rendering might be an occasion for stopping to speak, relating to the performative character of the texts belonging to the genre.
Like the genre’s itinerant shape-shifting characters, maqāmāt works showed a great capacity to traverse linguistic, religious, and cultural boundaries over their nearly millennium of circulation around the Muslim world. Their relatively continuous and widespread circulation over time and space and their thematic focus on travel, picaresque, humor, parody, geography, and trade reveal the interrelations between Arabic literature of premodern and modern periods as well as interrelations between and across literatures of the world. This talk will also discuss relations between the Maqāma and key works of European literature, such as particular tales of Boccaccio’s Decameron, and the legends of Till Eulenspiegel.

Bilal Orfali, Ph.D. (2009), Yale University, is Sheikh Zayed Chair for Arabic and Islamic Studies at the American University of Beirut. He previously held the M.S. Sofia Chair in Arabic Studies at the Ohio State University. He specializes in Arabic literature, Sufism, and Qurʾānic Studies. He co-edits al-Abhath Journal and Brill’s series Texts and Studies on the Qur’an and Handbooks on Islamic Mysticism. He is member of the editorial board of the Library of Arabic Literature at NYUAD, member of the advisory committee for the Abu Dhabi Center of Arabic Language, and serves on the advisory boards of many international Journals.

Maurice A. Pomerantz, Ph. D. 2010 (University of Chicago) is Associate Prof. of Literature at New York University Abu Dhabi and Program Head for Arab Crossroads. His first book, entitled Licit Magic: The Life and Letters of al-Ṣāḥib b. ‘Abbād is a study of a vizier’s use arts of epistolary arabic prose in tenth-century Iran. He is currently finishing a co-authored monograph with Dr. Bilal Orfali, entitled Badī’ al-Zamān al-Hamadhānī and the Maqāmāt: Author, Text and Commentary which will be appearing later this year with Reichert Verlag. Prof. Pomerantz serves on the editorial board of the Library of Arabic Literature, a series of facing-page translations of major works of Arabic literature published by NYU Press. 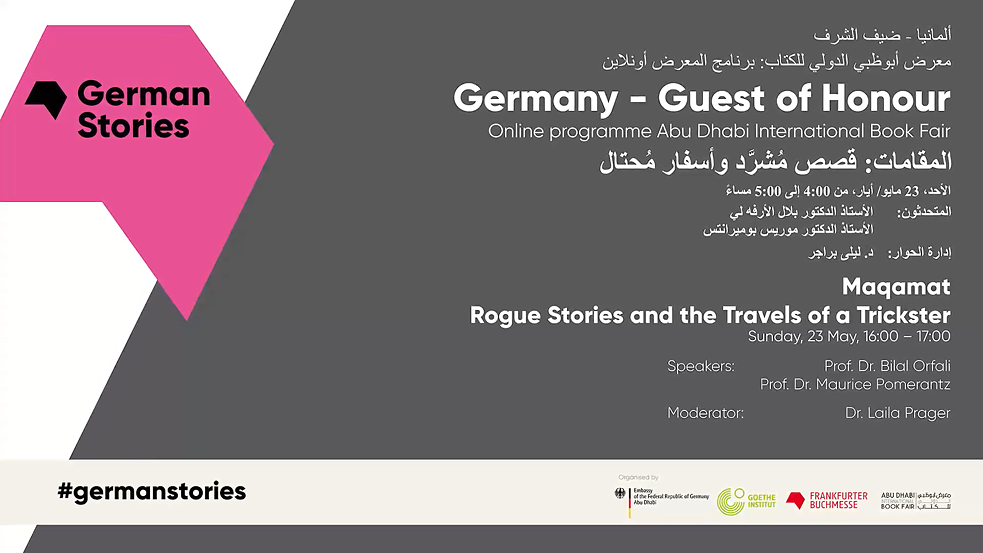 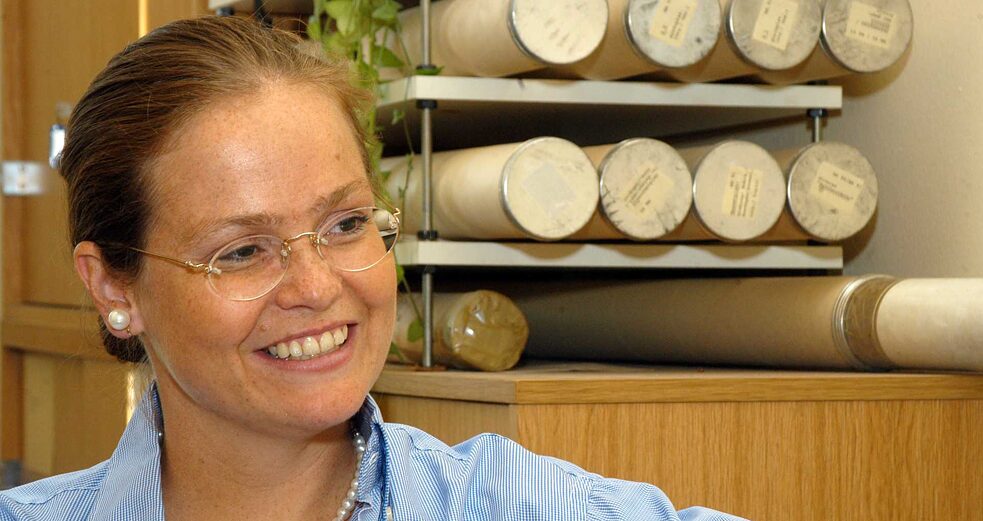 From Cinderella to Sindbad - Arab and German Storytelling Traditions

For the first time in the UAE an exhibition is dedicated to the rich cultural heritage of narrative traditions from ancient Egypt, the Arab world and Germany. “From Cinderella to Sindbad - German and Arab Timeless Tales” stretches from ancient Egyptian papyri to the tales of the Brothers Grimm, from the Arabian Nights to contemporary pop-up books and comics. A special chapter of the exhibition covers children’s books by Emirati authors based on Emirati folktales and stories that have been passed down through the generations. In this talk, the exhibition's curator Prof. Dr. Verena Lepper speaks about the idea behind the exhibition and about its role in building cultural bridges between Germany and the Arab world.

Prof. Dr. Verena Lepper, Curator for Egyptian and Oriental Papyri, Egyptian Museum and Papyrus Collection, National Museums Berlin. She published widely on ancient Egyptian literature and was awarded an ERC-Grant entitled ELEPHANTINE. Lepper founded and since 2013 leads the Arab-German Young Academy of Sciences and Humanities (AGYA) and is Honorary Professor at the Humboldt University Berlin. 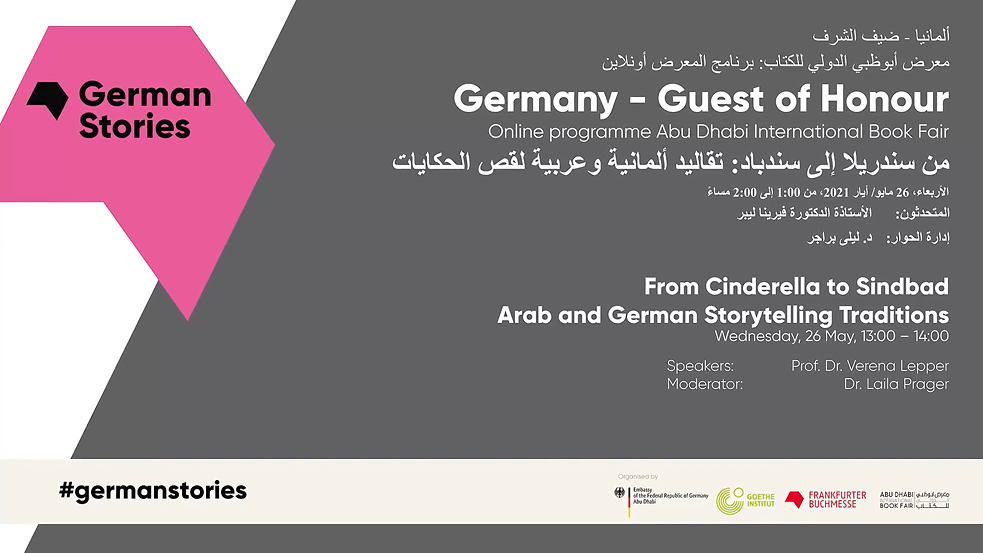