With the installation ‘Palast der Republik Burj Khalifa’ artist Jasmin Werner explores architectural connections between Berlin and Dubai. Steel girders from the demolished Palace of the Republic were used in the Burj Khalifa. The artist puts the two architectures in immediate relation and combi­nes both shapes into a one scaffolding sculpture. The outdoor scaffolding sculpture will incorpo­rate reused materials like construction mesh and canvas sourced in the UAE. The material will be combined with printed images on construction mesh that is referencing the journey of the re­cycled steel from Rosslau Dessau through Turkey to the UAE.

Jasmin Werner’s artistic research is one of entangled histories. In the latest iteration of the German-Filipina artist’s Palast der Republik Burj Khalifa, she traces the journey of construction material from Germany to the UAE in a movement that connects steel with labour migration and architectures of power. She does this by creating a hybrid ‘building’ that takes the form of a scaffolding sculpture. It has a four meter-long base that draws on Berlin’s former German Democratic Republic building, Palast der Republik which envelops a 6-meter-high vertical fragment of the Burj Khalifa, the world’s tallest building in Dubai. Made at a scale of 45:1 compared to the original structures, both are linked by global trade in that because of high steel prices in the 2000’s, repurposed steel from the demolished Palast (2006-8) was then used in the construction of the Burj Khalifa.

Interestingly the section of the Burj Khalifa that Werner remodels is not its gleaming spire but rather, in a reverse sense of verticality, its base, which is placed in relation to the Palast (at twice its width). These are not mere exercises in measurement. Rather, they point to an incisive commentary on the fall of one state apparatus and the rise of another, socialist and capitalist structures as mirror reflections, verticality as progress, neoliberal ambitions embedded in architectural exteriors and the way they mask the workers who lay their foundations. Thus Werner’s composite sculpture is layered with semi-opaque images scanned and printed on construction mesh, interrogating the normally impenetrable architectural facade while offering visual manipulations and signifiers. The Palast part of the sculpture is wrapped in a wide-angle zoomed-in image of a crowd of workers gathered at the Palast when the building was completed in 1976. Presented as a sea of blurry figures, the artist’s intention behind this image is clear: to conceal what it attempts to reveal, calling attention to the lost human dimension behind constructions of such a scale. A second image shows takes the viewer to a longitudinal view of the floors of the Palast.

The section of the Burj Khalifa is more structurally complex, with several segments of images in mesh wrapped around its stepped arabesque-like structure. On it are a distorted photo of recycled steel beams in acid yellow, the Burj Khalifa’s metallic facade, the hazy sky above Berlin, a bronze facade of the Palast, and a clearer image of smiling workers - amalgamating those who were part of the construction of the Burj Khalifa (taken by her Dubai-based cousin Pepa Cadawas) with the Palast der Republik’s staff this time. Here Werner unites the micro-narrative of steel with the macro-narrative of labour flows in service of the state. She also brings the image of construction, its fabric and material, from its origins in Berlin to its Dubai destination.

This seemingly unfinished monument, which entwines the Palast with its several histories, with the Burj Khalifa that is still making history, offers the chance to look upward to the rendition of an artificial sky - and through mesh and metal towards something that is still in construction, and always in the process of becoming. 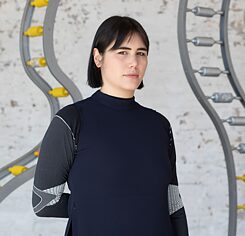 © Jasmin Werner  Jasmin Werner (Cologne, Germany) is a German-Filipina artist who explores the architectures of power and objects of status. Her practice draws attention to transnational movements, while occupying spaces of production and consumption. According to Werner’s iconology, one could also argue that the structural moments of our shared reality will necessarily remain within a repetitive continuum of time. In 2017, she was a fellow at the National Museum of Modern and Contemporary Art Seoul. In 2022 she was awarded the Callie's Studio residency in Berlin and KKV workshop residency in Malmö. Her work has been shown at Kunstverein Braunschweig, Bärenzwinger (Berlin), Museum Folkwang (Essen), Damien & The Love Guru (Brussels), Galerie Guido W. Baudach (Berlin), DuMont Kunsthalle (Cologne) and Bundeskunsthalle (Bonn) among others. She studied at HFG Karlsruhe, Gerrit Rietveld Academie and finished her Studies at Hochschule für Bildende Künste Städelschule, Frankfurt am Main, as a Meisterschüler of Peter Fischli.