The Montreal districts of Saint-Henri and the neighbouring Pointe-Saint-Charles are among the most multicultural and diverse in the city. Prosperous newcomers, who have moved from other parts of the city to the luxury apartments newly built along the Lachine Canal, meet residents, some of whom have already spent their entire lives in the quarter and some of whom live under the poverty line. A socially stressful situation, as is already known from countless cities. Nevertheless, St-Henri, which is rich in restaurants, clubs, art venues and festivals, is considered to be one of the liveliest quarters in the city. Despite all the innovations, however, it has retained its traditional values and possesses its own flair thanks to the diverse cultures that have been present for many decades. 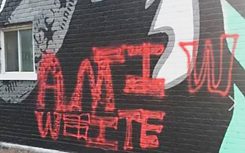 Smearing on Sabogal's work | © Julien Capôte However, St-Henri is also politically diverse - a defensive left-wing underground is responsible for targeted vandalism against newly opened shops and restaurants, a sign of the gentrification of a traditional working-class district. So it is all the more surprising that this cosmopolitan and diverse environment also has a completely different political side.

As part of the festival Voix insoumises / Unceded Voices, a biennial of indigenous street art, which took place from 13 - 21 August 2017, the work White Supremacy Is Killing Me by Colombian-American artist Jessica Sabogal was created. The mural shows an indigenous woman holding a sign with the message "White Supremacy is Killing Me" in her hands, which unfortunately has a dark background: An investigation conducted in Canada in the 1970s had the terrible and disturbingly vague result that in previous years 'between 1000 and 4000 indigenous women had disappeared without a trace'. The investigation was then closed without further action and the question arose as to whether it would have been dismissed if another population group had been affected.
The investigation was resumed in September 2016 by Prime Minister Justin Trudeau in response to growing public pressure.

Only a few days after its completion, it was smeared with the words "Anti White" by unknowns. The obviously racist background of this act made the Quebecers aware of the existence of a radical right-wing underground. The work was cleaned and restored by local activists. To date, it has been attacked three times, and the perpetrators have not been identified.

The Colombian-American muralist Jessica Sabogal (born 1987 in San Francisco), uses art as a haven, a creative outlet of adoration and exaltation for women with often untold stories. Her pieces have a vision of female identity that is revolutionary and powerful, brave and beautiful. Using the spray can, she colors her canvas by unraveling stories she once heard, lived, struggled and loved.

Working as a street art artist in a male-dominated medium means continuously crossing boundaries by using her medium for social change, action and empowerment. Since 2011, Sabogal has made frontpage on CNN.com with her time-lapse tribute to the Egyptian Revolution, designed Dorothy Allison's 20th anniversary cover for Plume Book's Bastard Out of Carolina, and is the first female artist to be commissioned to paint murals at Facebook headquarters in Menlo Park, California.

In the past, she’s been inspired by literary works of poets, authors, and women of color whose experiences have served as muses of her creations. A recent series of her works honors the perfection of women and the female body: "Women Are Perfect (If You Let Them)" is an attempt to spread this simple but necessary message worldwide.

Sabogal grows with resilience, prospers with purpose and paints without fear. She seeks to connect the world around us with art that always reminds us that women should be valued, glorified, respected and, above all, loved. 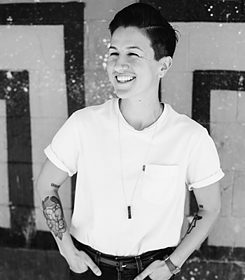