A hope for emancipation and a classic Western narrative veiled in Indian garb, the Nobel Prize winner's work brought him recognition as an author of modern German Literature globally, way beyond German-speaking Europe, still dominant in the south-Asian subcontinent.

Siddhartha is neither Hesse’s debut novel nor did it like The Glassbead Game (1943) bring its author the coveted Nobel Prize for Literature in 1946. Yet, it brought him recognition as an author of modern German Literature globally, way beyond German-speaking Europe.

Set in the 6th century BCE in the kingdom of Kapilavastu, it is structured like a Bildungsroman, a typically German literary genre, that traces the moral and psychological development of a protagonist, who goes in search of life’s questions, from childhood to adulthood. The novel’s twelve chapters are divided into two parts - the first is dedicated to Romain Rolland, whose writings on Eastern Philosophy impacted Hesse, and the second to Hesse’s cousin Wilhelm Gundert, a scholar of East Asian religions and languages.

The narrative traverses the life of the conspicuously named Brahmin son, Siddhartha. The eponymous protagonist (the name plays on the birth name of the Buddha) embarks on an inward journey with his childhood friend Govinda, prompted by nagging restlessness and a desire for self-realisation. Through a layered interplay of historical fact and fiction Hermann Hesse creates the figure of the eternal prodigal son who breaks free of familial bonds and authority to strike his own path.

This figure is not to be seen as an aberration, for Hesse’s oeuvre is replete with the proverbial Auβenseiter (Outsider), as the protagonist. Yet, why did Hesse choose to place his protagonist in ancient Indian antiquity along with the living Buddha? Was this an affirmation of his break with his parent's Swabian pietism and turn to indic religions? Ever since its publication, scholarship on this novel is replete with diverse viewpoints on this issue, while there is unanimity on the autobiographical content in his work. In fact, Hesse is seen as an author who wrote his life into his fiction. Approaching the novel from this perspective, it becomes evident that the apocalyptic reality of the first World War, in conjunction with Hesse’s biography and existential crisis, did impact its conception. 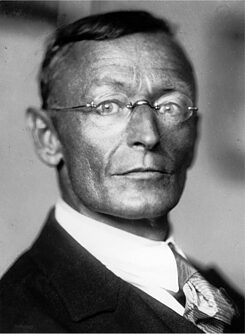 © Gret Widmann/Suhrkamp Verlag Hesse’s mother was born in India while his maternal grandfather Hermann Gundert, worked for the Basel Mission, a protestant Christian missionary society for several years at Thallasseri in Kerala. He compiled the first Malayalam-English dictionary, a translation of the Bible into Malayalam and several treatises on Indian languages, society and religion. Hesse, who inherited his grandfather’s personal library with several books on Indian and eastern religions and philosophy, imbibed an interest and scholarly understanding of these, from an early age. Thus, true to the tradition of German Orientalism with its roots in the 18th century Romantic Movement, ancient India becomes the locale of the novel’s plot.

Other influences which mark Hesse’s sensibilities are Friedrich Nietzsche and Karl Gustav Jung who was his psychotherapist. His work is marked by Nietzsche’s Zarathustrian spirit and the Jungian archetypes. Another factor that impacted this work was Hesse’s journey to the East in 1911. This journey was undertaken to gain distance from Europe, whose civilization he felt was hollow and tottering, to visit the country of his mother's birth, and it was also a pilgrimage to the land of ancient wisdom.

Siddhartha and the Hesse Boom of the 60s/70s

Siddhartha, with its Indian philosophical wisdom and a language which was both personal, symbolic, simple, yet highly poetic, had caught the imagination of the World War generation. The disenchantment with the misuse of science and technology made many in the West seek solace in the philosophy of Ahimsa and the religious value systems of the East. Hesse’s work led his contemporaries to seek alternatives to the near-apocalyptic reality of Europe, in the first half of the twentieth century. However, in the anglophone world, Hesse remained relatively unknown till English translations of his novels started getting commissioned after the Nobel Prize for literature was awarded to him.

The first English translation of Siddhartha by Hilda Rosner appeared in America in 1951, but it was with the Hesse boom of the sixties and seventies that Siddhartha attained a cult status. After almost fifty years of its publication, it succeeded in striking a chord with the angst and frustrations of the youth of the sixties and seventies not only in Western countries but also in India. One of them was the student protests at the Sorbonne University in Paris that assumed the form of a Pan- European Students Movement of 1968, spreading soon to North America and parts of Asia.

The Woodstock generation found a resonance of its alienation from the bourgeois life of their parents, a quest for peace and self-realization in the fictional world created in Siddhartha. Within this counter culture, Hesse came to be venerated like a Guru and his novel became a road map for Indic spiritualist quests. As a result, 100,000 copies of the novel were sold worldwide.

The Siddhartha Reception in India

In India, this text is part of suggested readings in German Literature courses and has generated scholarly work in the form of dissertations along with academic articles. However, in India too, its wider dissemination was linked to the Hesse boom of the seventies, which in the cinematic world, resulted in its adaptation into an English language feature film directed by Conrad Rooks. In the movie Siddhartha (1972), the lead roles were played by Shashi Kapoor and Simi Grewal, two very prominent Hindi film actors. The new millennium saw the consolidation of translations of Hesse’s work and Siddhartha in particular into all major Indian languages (such as Hindi, Urdu, Gujarati, Punjabi, Tamil, Malayalam, Sanskrit etc.) under the aegis of the Hermann Hesse Society of India (HHSI) established at Thallasseri, in 2005. Further, its translation into more than sixty languages of the world makes Siddhartha the most read novel with an Indian setting outside German-speaking Europe.

It continues to be relevant for every generation for its never-ending journey into the self.

Jyoti Sabharwal (MA.Mphil.PhD. in German Studies) is a Professor at the Department of Germanic and Romance Studies, University of Delhi, Delhi. She has published extensively on German Speaking Exiles in India and Comparative city fiction. Her publications also include translations of fiction and non-fiction from German into English and Hindi. In 2013, she published Willy Haas: Die Begegnung mit Indien als Exilort (Peter Lang).

Back to "The Sound of Faraway Lands"