The German Film Week is the only film event in the Philippines that features the best and latest in contemporary German cinema. Now on its second year audiences can expect 12 select German feature films, as well as a Berlinale film from Filipino filmmaker, Brillante Mendoza. Since its launch, the film week has attracted an important and relevant number of audiences throughout the country, and has helped promote the activities and advocacies of the German Cultural Center.

Tickets for all German films are priced at P100 while the featured films by Brillante Mendoza are priced at P200. Tickets are available at SM ticket counters of the participating malls or via smtickets.com.

See the full schedules below: 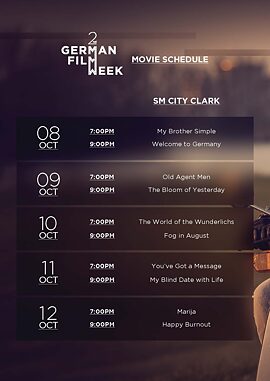 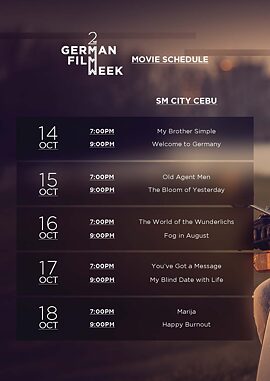 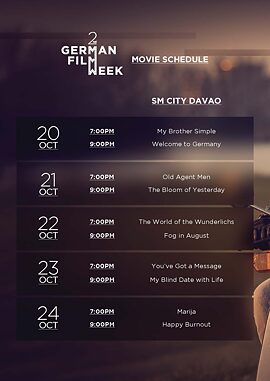 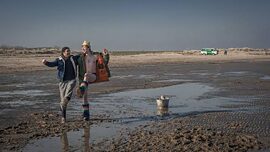 When his mentally handicapped brother is to be sent to a home, Ben and Simple run away, trying to find their long-lost father. Ever since Ben can think, he and his brother they call “Simple” have been thick as thieves. Simple is 22 years old, but mentally he's a three-year-old. Even if Simple can be a nuisance, Ben can't imagine life without him. When their mother dies unexpectedly, Simple is supposed to be sent to a care home. But Ben won't stand for it. They run away together, and after a crazy odyssey and a night spent outside under the stars, Ben realizes there's only one way out: They have to find their Dad, whom they haven’t seen for 15 years. (Source: German Films Service & Marketing GmbH)

Winfried doesn't see much of his working daughter Ines. The suddenly student-less music teacher decides to surprise her with a visit after the death of his old dog. It's an awkward move because serious career woman Ines is working on an important project as a corporate strategist in Bucharest. The geographical change doesn't help the two to see eye to eye any better. Practical joker Winfried loves to annoy his daughter with corny pranks. What's worse are his little jabs at her routine lifestyle of long meetings, hotel bars and performance reports. Father and daughter reach an impasse, and Winfried agrees to return home to Germany. Enter dazzling "Toni Erdmann": Winfried's smooth-talking alter ego. Disguised in a tacky suit, weird wig and even weirder fake teeth, Toni barges into Ines' professional life, claiming to be her CEO's life coach. Wilder and bolder than Winfried, Toni doesn't hold back, and Ines meets the challenge. The harder they push, the closer they become. In all the madness, Ines begins to understand that her eccentric father might deserve some place in her life after all. (Source: German Films Service & Marketing GmbH)

Germany 2015. Four very retired, ex-East German spies, or "Kundschafter des Friedens" as they were officially named, led by the once legendary Jochen Falk, are called on by the German government. Their mission is to rescue the interim president of the divided Republic of Katschekistan, who has been kidnapped by separatists, along with Berlin's official man on the ground, Franz Kern. To keep Jochen and his maybe no longer so crack team under control, all of whom are determined to prove they were treated unfairly by history, they are put under the command of the young and enthusiastic BND agent Paula Kern. But what neither she nor her bosses back at HQ know, Jochen and his friends still have a score to settle with Franz, Paula's father. (Source: German Films Service & Marketing GmbH) 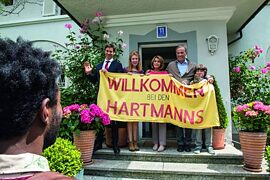 There is a lot going on at the Hartmanns' place: Mother Angelika's singlehanded decision to take in the asylum seeker Diallo after visiting a refugee shelter has upset her husband Richard. Naturally, the arrival of the unexpected guest causes some misunderstandings and turbulence. Then, daughter Sophie shows up without prior notice: The aimless long-term student is trying to get away from a manic admirer. And if that wasn't enough, son Philip whose nerves are worn out returns home with his son Basti. The illustrious gathering of unequal characters obviously calls for conflict and soon things get rocky with the Hartmanns. (Source: www.filmportal.de) 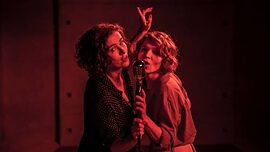 Sports writer Mark is baffled when he receives romantic text messages on his cell phone. What he does not know: His new number once belonged to the deceased boyfriend of Clara, who continues to send text messages in order to cope with the loss. When Mark's girlfriend discovers the texts, she is understandably upset. Along with his bestfriend David, Mark sets out to find the mysterious writer. (Source: www.filmportal.de) 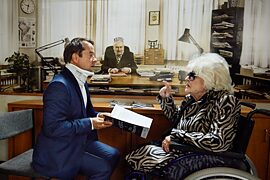 Totila Blumen is a Holocaust researcher. As such, he has no sense of fun. This applies in a general sense and specifically when his colleagues try to turn an Auschwitz conference into a corporate-sponsored media event. In the process, they trample all over the memory of the recently deceased Professor Norkus – whom Totila revered. On top of all this, Totila is lumped with an intern: a very young and irritating French student named Zazie. As she follows Totila like a puppy and has a fling with his boss, the otherwise ser ious and measured academic becomes a nervous wreck. But it’s no good moaning about it – certainly not to his stressed wife, who demands that he gripe less and learn to accept what his life has to offer. And so Totila ploughs on with his work, aided by the overwrought, eccentric Zazie. She, however, appears to have an agenda of her own – and it’s closely related to Totila’s background and well-guarded family secret. (Source: German Films Service GmbH) 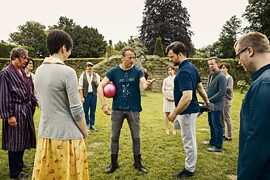 Old punk rocker Fussel has the world wrapped round his finger; women, life, the system – all handled with a quip and his ready charm. Work’s for others too. But then an internal audit at the unemployment office means his advisor is forced to act. A job’s out of the question, of course, but being declared unfit for work, that’s another thing. So Fussel is packed off to therapy, where he meets people genuinely burned out. He soon turns the place upside down, drives the therapist and nurse nuts, but he’s also a breath of fresh air for his fellow patients. The more Fussel gets to know them, the more he gets to know himself until it’s no longer clear who’s treating whom, who really needs help and what it’s really all about, in therapy and in real life. (Source: German Films Service & Marketing GmbH)

After films like "Mein Führer – Die wirklich wahrste Wahrheit über Adolf Hitler" ("My Führer – The Truly Truest Truth About Adolf Hitler", 2006/07) and "Das Leben ist zu lang" ("Life Is Too Long", 2009/10) Swiss-born writer-director Dani Levy has now turned his sights to the screwball family comedy genre for his latest project about a single mother on the verge of a nervous breakdown, who also has to cope with a gambling addict father, an irresponsible ex-husband – and exploding coffee machines to boot. Katharina Schüttler is cast as the musician Mimi, who finally has a chance to take her life and future into her own hands after her son secretly enters her for a casting show. But she hasn't reckoned that her family would want to come along to the show by hook or by crook. Who knows what surprises are in store for them during the journey. (Source: German Films Service & Marketing GmbH)

Marija, a young Ukrainian woman, earns her living as a hotel maid in Dortmund, but dreams of owning her own hair salon. She puts money aside each month, but when she is fired without notice, her dream seems out of reach. Without work and under financial pressure, she finds herself forced to look for other opportunities. Her body, her social relationships and her own feelings take a secondary importance to her goal. Michael Koch’s feature film debut is the portrait of a young woman who lives on the periphery of our production and consumer- oriented society, but does not accept the ascribed role of the victim. Demanding, determined and uncompromising, she fights to live a freer, self-determined life. (Source: German Films Service & Marketing GmbH) 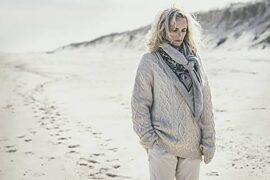 Max Zorn, a writer in his early sixties, travels to New York to launch his new book. His wife Clara is expecting him; she has been working on the book’s publication for the American publisher. Zorn’s very personal novel tells the story of a great but failed love affair. Max soon meets the woman who was the target of his affections at the time, German-born Rebecca, now a successful lawyer in New York. The pair return to Montauk for one winter weekend in this small coastal town at the end of Long Island where they were once so happy together. Rebecca is distant and hurt. Max tries to get close to her. They talk about their years apart, rekindling memories of their shared past. But is there a present or a future for the feelings they once had for each other? After his adaptation of ‘Homo Faber’, Volker Schlöndorff once again returns to the universe of his friend Max Frisch. Variations on the original story’s motifs of happiness and the pain that comes with remembering are transposed to the screen for this new, cinematic version. (Source: 67. Internationale Filmfestspiele Berlin Catalogue) 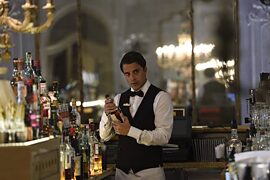 Film adaptation of Saliya Kahawatte's eponymous autobiography: At age 15, Saliya Kahawatte almost entirely loses his eyesight. Albeit nearly blind, his faith in life remains unbroken and he is unwilling to be put down as "disabled" by society. Without a white cane or other aids he feels his way through life, compensating his lack of ability to see by sharpening the remaining senses. He graduates from a regular high school, finishes a training as a hotel clerk, studies hotel management und starts working as a waiter in a five-star hotel – without anyone realizing that he is practically blind. For 15 years he succeeds in his career and nobody is the wiser. 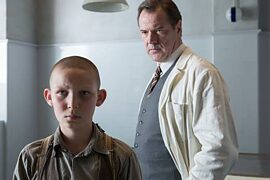 Director Kai Wessel returns to a dark period in the last century for the first feature film to address one of the greatest taboos of German history – the Nazis' euthanasia program during the Third Reich. Based on Robert Domes' 2008 historical novel, "Fog in August" centers on the fate of 13-year-old Ernst Lossa who is committed to a mental hospital in
1942 because of his origins in a family of travelers. He soon discovers the truth behind the hospital's façade and sabotages its euthanasia program to help his new-found friends, but his actions have not gone unnoticed... (Source: German Films Service & Marketing GmbH) 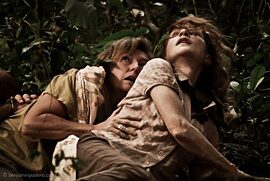 In 2001, at the Dos Palmas resort in Palawan, Philippines, a group of rebels called the Abu Sayyaf took around a huge number of hostages, which included a lot of foreign nationals, and had put the country on a black list for tourism. Faithfully following the sequence of events in these kidnappings, “Captive” presents the torturous life the hostages faced, and recreates a realistic but neutral approach that neither justifies nor vilifies the actions of the terrorists involved.