As AI scientists try to test the technology’s creative limits, the world of music is being issued with a challenge. Goetz Richter, Associate Professor at the University of Sydney’s Conservatorium of Music, gives his view on music, artificial intelligence and consciousness.

Music remains mysterious. Seemingly useless and playful, it claims our attention. Seemingly elusive, it is always available on our devices. Music mesmerises us with its transience and it touches us in its immediacy. We feel the visceral stimulations of tone and rhythm. We respond to the sounding shapes, entrancing rhythms, intoxicating harmonies and haunting melodies with mind and spirit. And yet, we remain unsure of its whereabouts, unable to account for its power or its creation.

Is music an expression of fundamental human needs, instincts or desires prior to verbal utterance or is it a transposition of our most ardent efforts to capture beauty, truth and goodness beyond conceptual articulation? Does music connect us to our most mysterious foundations or does it disclose the highest possibilities of consciousness?

No matter how we might respond to the mystery that is music, the advance of algorithmic processing and artificial intelligence is challenging music and confronting musicians. This advance is man-made. Through it we hope to understand and advance human creativity itself. Artificial intelligence arises from a Promethean and Faustian ambition. Humans seek to transcend themselves by defining and understanding their own possibilities. 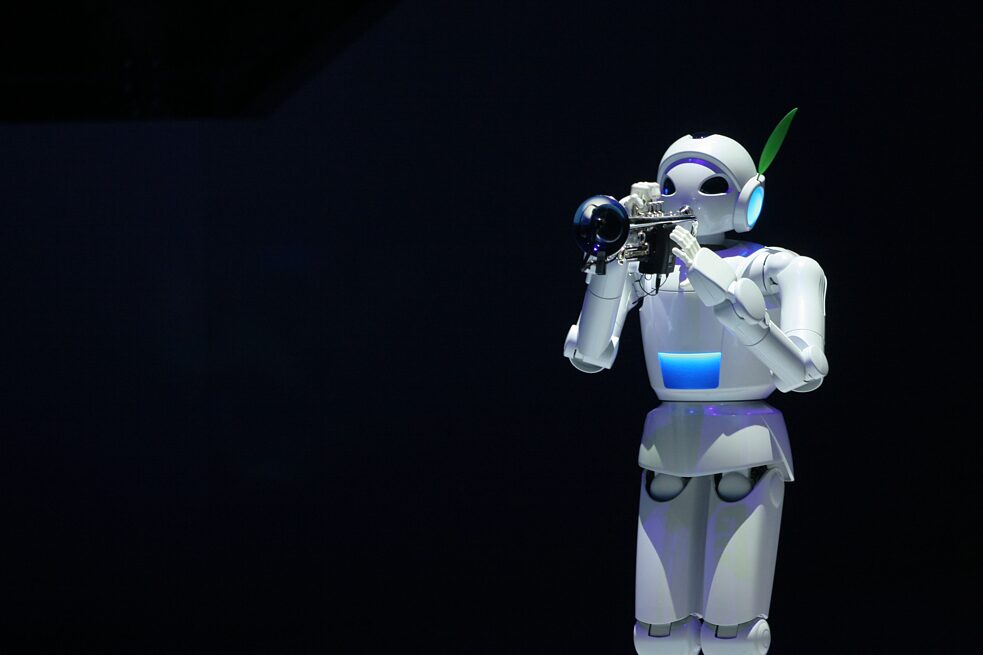 Concero, a band made up of Toyota robots, plays at the 2005 World Expo | © Jeremy Sutton-Hibbert / Alamy Stock Photo

The possibility that algorithmic systems, autonomous neural networks or self-learning machines achieve – and even surpass – human creativity is exciting and confronting: Will artificial intelligence compose a musical work of original genius at any point? The answer depends not only on our current or projected technological state of play but on a view of the ontological determinations of music and their relationship to consciousness. It is here, that AI in its current form at least may well be left wanting and human creativity may well reveal its ultimate characteristics and requirements.

The creation of music, while intellectually abstract, uncovers modes of existence and projects modalities of consciousness. A composition is a guide, a direction towards intentional activity for musical performers and listeners. A musical score is a suggestion of possibilities, a riddle for our intentionality to create an emphatic sounding event. This event is itself particular, a phoenix, perishing in the moment and renewing itself with every performance in its infinitely different and new particular identity.

One of the great misconceptions of modern culture suggests that musical compositions are formal structures only, blueprints for musical performance, which are merely realised by performers for the consumption of listeners. However, the ontology and temporality of music make this view inauthentic. Musical performance itself has an autonomy and independence. It is achieved through interpretation, a search for meaning, that is always a reflection of the conscious life of the performer.

In essence, musical creation unfolds within a peculiar context: a composition is created as a challenge and riddle to conscious interpretation and listening. The performance of a work is a personal document of this search rather than a reflection of an independent object. A culture that is driven by the marketplace distorts this authentic view of music as an art in its preoccupation with tradeable commodities.

In that perspective, music increasingly becomes a mere assembly of pleasant, exotic or intriguing objects that might be created, even mass-produced in any number of ways for consumption. Naturally, AI has a much greater application in such a context. We see that in the realm of popular music where algorithmic systems are already taking over musical production and packaging on streaming servers. 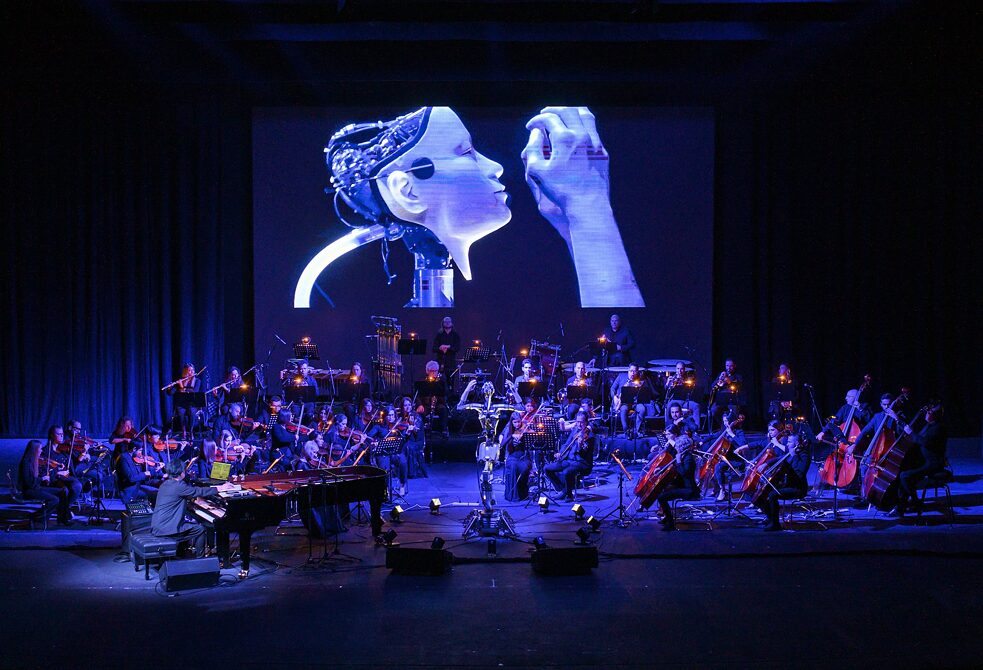 AI systems are capable of impressive, quantitative, analytic achievements even in music. Computers have been used to compose music for some time. The composer and scientist David Cope for example has created works that sound like Vivaldi, Bach or Chopin through computer analysis of the characteristics of their compositions. These efforts are impressive to the point where computer creations can deceive even learned audiences about the authorship of a work of music. Yet, as impressive as this may be, we should not forget that Cope’s computers completed essentially analytical and imitative tasks – they created convincing forgeries.More recently Cope has turned his mind to creating a computer system that seeks to be capable of entirely original composition.

However, true musical creativity would need to match the genius composer who finds new and captivating musical expressions and develops a unique voice and style. No matter how clever the combinations and musical compositions are that Emily Howell (Cope’s latest computer program) produces, they remain essentially dependent on a human programmer, who teaches an AI system to progress by analysis. Music, in any case, is created as a seed of interpretative dialogue – even when we are using computers to compose.

Widely publicised achievements of AI systems such as the recent completion of Schubert’s Unfinished Symphony (a publicity stunt by phone company Huawei) or the fashioning of sketches of Beethoven’s 10th symphony into a work are no exception. They rely on human direction, selection and guidance when it comes to the final work which becomes what it is on account of the person selecting the final assembly. The system merely generates possibilities through analytic processing. It abstracts family resemblances from a set of given instances – a quantitively onerous task but very limited in its contribution to creativity, reducing music to musical material and, if anything, narrowing creative possibilities.

A creative process that abstracts features from a given set of original, existing works is entirely different from one that creates such original works in the first instance. It is here that AI is struggling to reach a level of authentic creativity in music since it has no grasp of the importance of its mystery.

To be sure, the technological capacities are perfectly capable of selecting, configuring, reconfiguring, editing, re-creating and re-composing existing musical material creating an appearance of originality and fundamental creativity at a combinational or exploratory level. However, creating new, truly original music in an artistic sense seems entirely beyond the reach of algorithmic systems at this point, and for good reason. 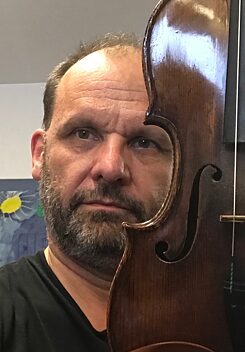 Goetz Richter | © Goetz Richter The mystery of music, the fascination of listening and the curiosity to find meaning are – properly understood – not the result of an analytical response to abstract structures. They grow from a projection of possibilities expanding our consciousness and attention beyond, sounding moving form and immediate sensuous enjoyment.

Artistic music always suggests that there is more to what we hear. Composers could never create the sense of openness of musical listening through analysis or manipulation of material alone.

Music reaches beyond the given into the realm of possibility and intentionality. Music calls on interpreter and listener to embark on a search beyond the audible. This requires not merely intelligence – it requires attention to the immense possibilities of our attention and consciousness.

Algorithmic systems may exhibit analytical intelligence; however, they continue to be far removed from even the most rudimentary possibilities of human consciousness such as spontaneous attention or empathic intention. That is why they are also far removed from creating music with genuine artistic significance.

Learn more about Goetz Richter's views on the future of creative AI here.

Goetz Richter is a violinist, teacher and thinker with a dual background in music and philosophy. He is currently Associate Professor at the University of Sydney’s Conservatorium of Music. Previous positions include a 15-year tenure as Associate Concertmaster with the Sydney Symphony Orchestra.