Error in the System
The Peter Principle

It was in the mid-1960s that Laurence J. Peter, a young teacher in Canada, wondered why one encounters so many incompetent employees over the course of a career. Where is the error in the system? He published his research in his somewhat satirical book “The Peter Principle”. Let’s we take a critical look at this principle, which at first glance seems logical. But is it really suitable for explaining inefficiencies in the labour market, or is it actually just what it was originally intended to be – a farce?

We’ve all had them: incompetent coworkers. Barring the subjectivity of this assessment and whether we have the wherewithal to make this judgment, we know that people are regularly promoted without merit. Strictly hierarchical business models have their pitfalls. Laurence J. Peter, professor at the University of Southern California, took an interest in hierarchies and began to investigate them, albeit more anecdotally than in a scholarly sense. He fittingly named this new research discipline “hierarchiology.

“In a hierarchy, every employee tends to rise to his level of incompetence.” 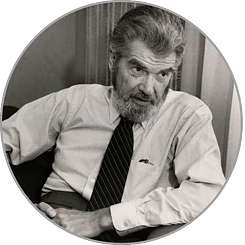 Laurence J. Peter | © Toronto Star Quite often, the chief problem with scientific models are the basic assumptions that precede them, which simplify reality as if an architect were learning the principles of engineering based on a Lego house. This is no different with hierarchiology and its central thesis, the Peter Principle. In 1969, Peter published a book of the same name together with Raymond Hull. In it, a career path is seen as a linear chain: if a person does their job well, according to Peter, they will eventually be promoted to the next higher position in the company hierarchy. If they again master this position, another promotion is due. And so on. Until the position is too difficult. Then the employee can no longer manage their job and they’re no longer promoted. The essence of this model is the assumption that every employee is promoted until they reach the point that they are incapable of accomplishing the task at hand. Since mediocrity is usually not a reason for dismissal, the person remains in a position where they are simply out of their depth. Sounds logical, but as we’ve already suspected, a bit simple.

World of decision-makers and influencers

To illustrate this, Peter introduces the teacher B. Lunt, along with a few other examples. The young man had been an exemplary student and is a talented and intellectually competent teacher. Soon he moves up the ranks to principal of the school. Since this is an example, the disaster predicted by the Peter Principle unfolds immediately. The newly minted principal cannot cope with his new job. Mr. Lunt becomes overwhelmed in the bureaucratic world of decision-makers and influencers; he lacks finesse and tactical skills. The job of principal isn’t necessarily harder than that of a teacher (and vice versa) – it’s just different. As a school principal, you have to exhibit political skills. You have to have a much longer planning horizon and less patience, and the people you work with already know everything and certainly don’t want to learn anything new. If you really look at it, a school principal is a kind of an anti-teacher.

A kind of beginners’ course

Now let’s go back to the model’s premise. Peter assumes that all companies have a pyramid shape, that is the number of staff members decreases as the hierarchy level rises. All positions are precisely defined in his model, the tasks associated with them cannot be changed and, moreover, the activities in one job are completely different from those of the job above it. We soon realize that today’s working world very rarely fits into these extreme conditions. In most businesses, it’s quite helpful to master the tasks required at the lower hierarchy levels, and linear, steady progression up the ladder of a company is much rarer today than it was 60 years ago. People change jobs much more often, start something new and, most importantly, they are able to learn. This is the essence of the error behind the Peter Principle – people are able to learn. They adapt to new situations. Or better yet, they adapt their position to their own abilities.

So why should we even consider the Peter Principle today? Because it can be seen as an introduction to a complex topic, a kind of beginner course. There are still flaws in the system, but who knows, perhaps today’s working world owes something to Laurence J. Peter’s astute observations: what Peter described almost 60 years ago doesn’t even exist in the public service anymore.

Fortunately, Laurence Peter keeps a slew of special cases on hand so that his principle can be applied to even more situations. The most interesting are the cases in which incompetent employees are promoted from their current position.

Percussive Sublimation is sort of a means of motivating everyone else. Promoting one incompetent employee is intended to give others hope that they, too, will soon be promoted.

Peter’s Inversion is a situation in which the promotion of the incompetent person depends on their rigid adherence to rules. The meaning of the rules is taken to absurd extremes. They were once created to actually increase productivity, but in this case, compliance with the rules overrides productivity, which suffers from a rigid, bureaucratic obsession with the rules.

The Lateral Arabesque  is a technique used to get them out of the way by promoting them. By concocting another position that sounds good, the incompetent person can be removed from the position where they might do harm.

Michael Krell is online editor at the Goethe-Institut Montreal.