Many historic districts of Cairo are being redeveloped to adapt to the pressure of car traffic; which resulted in the reduction of green spaces and the cutting of a number of trees. This has prompted tree lovers and environmentalists to search for new ways to protect trees on the streets of Heliopolis and Maadi.

While the historic Merryland Park in Heliopolis (New Egypt), east of Cairo, was in preparation to receive the spring of 2015, the dredgers of the Ministry of Public Business Sector started cutting some trees to build an underground warehouse.

Some of the inhabitants of Heliopolis, as well as NGOs, resisted the dredging operations and submitted a memorandum to the Governor of Cairo and the Ministry of Environment. Later on, the Ministries of Environment and Agriculture formed a committee to assess the environmental impact of the project. Assessment results came out with an order to suspend the works of the project. Most importantly though is the order to allocate numbers to the historic Merryland Park trees and register them at the Ministries of Environment and Agriculture in order to protect them.

In 2021, when campaigns were launched for widening roads in the same prestigious neighbourhood, part of the park was taken with the purpose of setting up a memorial, but the numbered trees were not touched this time, not because they are protected by law and constitution, but because they are documented and allocated numbers registered at the Ministries of Agriculture and Environment.

This is why it is important to extend the experience of numbering trees to “Heliopolis Heritage Initiative”, the campaign member, Tamer Hasan, told us. As such, a massive campaign was launched in November, roaming the streets of Nahro, Ibn al-Masrifi, Shehab al-Deen Khafaga and other streets, to number and name 341 endangered trees. 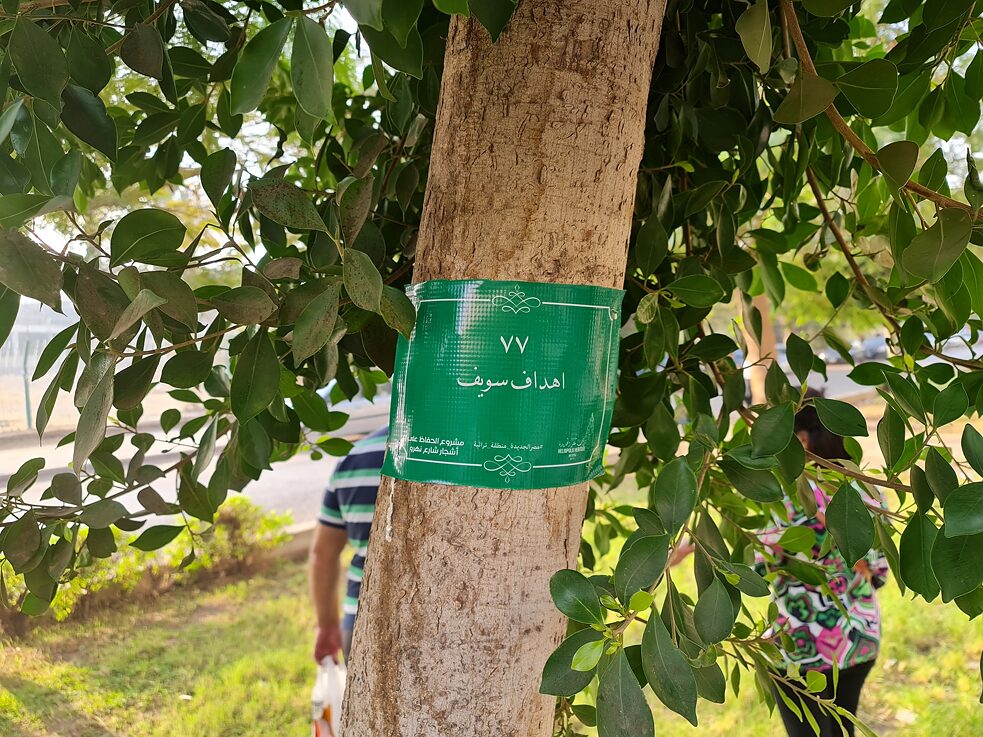 Due to the numbering of trees, the initiative succeeded in saving multiple trees in Maryland Park in Heliopolis. | © The Heliopolis Heritage Initiative This initiative was in response to the cutting of trees and the dredging of parks and plantations carried out by the local units in the neighbourhoods of Cairo in general, and that of New Egypt in particular, to widen roads and start various projects.

While navigating through Google Earth satellite photos, we managed to document large scale dredging of parks in the middle of Al-Muntazah and Zakariyya al-Ansari streets as well as Ibn-Sandar Park, etc.

By checking Google Earth photos at different times, we identified major changes in the quantity of green spaces, which started in the summer of this year. However, the shrinkage of green spaces in Heliopolis seems to be on the increase as from last year. According to a study conducted by the research project of the American University in Cairo “Solutions for Alternative Policies”, 96 acres of green spaces were cut off in Heliopolis in 2020.

Dredging green spaces constitutes a breach to the environmental law and constitution which provides special protection for trees in Egypt. Article 45 in the constitution states that “the government guarantees the protection and growth of the green spaces in urban areas”. Article 27 of Law No. 4 of 1994 stipulates the establishment and maintaining of plantations in every neighbourhood and village. Furthermore, article 367 of the Penal Code criminalises the cutting of plants and trees.

Egypt, in general, and Cairo in particular, suffer from high pollution levels; the fact that accelerated the pace of its climate change. According to estimates published by the International Bank, temperature will increase by 2-3 degrees Celsius in Egypt by 2050, which increases the occurrence of heatwaves and drought.

As the importance of trees is increasing amid climate change, an afforestation bill was drafted in 2020. However, the government was late in submitting it to the Parliament, which drove MP Samira al-Jazzar to question the reason for the delay in presenting this bill to the parliament.

This bill is in line with Paris Agreement signed by Egypt. Article 5 of Paris Agreement stipulates that parties commit to stopping the removal of forests, and to the necessity of managing them.

According to the United Nations Climate Change Organization, the relation between Paris Agreement and trees is clear, as “forests will be a main ally for combating climate change and achieving the long-term goal of restoring the Earth’s environmental balance by the second half of the century”.

Given the importance of trees, many countries around the world adopted more stringent strategies regarding the cutting of trees. The very first step of these strategies is numbering trees to document their existence, as was the case in Merryland Park. This approach adopted in European countries like Germany, and some Arab cities like Dubai, contributed in saving trees from covert dredging operations.

However, this wasn’t the case in Egypt due to the lack of an adopted mechanism for documenting trees. Furthermore, the absence of formal statistics for the number of trees in Egypt aggravated the crisis. The last statistic issued by the Central Agency for Public Mobilization and Statistics in 2018 indicates that Egypt contains 1802 parks and recreation grounds.

In Response to Civil Society

Tamer Hasan, Member of “Heliopolis Heritage Initiative”, says that there is concern regarding the widening of Nahro Street, just like other streets, at the expense of green areas. In order to protect endangered trees in these areas, numbering trees was under consideration.
The initiative didn’t just number trees, it even named trees after celebrities. Tamer believes that this initiative is more effective than following legal procedures to stop the projects of dredging green spaces and cutting trees, inasmuch as law is not activated.

Tamer asserts that the campaign achieved its goals by halting the abuse of the trees numbered, and that more events are being planned to protect trees in the region, such as starting to collect financial resources in order to move trees to other places instead of cutting them off, using equipped cars. Another event was the launching of the annual activity, the Christmas tree, along with the accompanying activity of raising public awareness to the importance of trees.

Considerable attention was drawn to cutting trees in Cairo following a campaign launched on social media against the project of extending an axis in the prestigious Al-Maady suburb south of Cairo, which led to launching the hashtag: “Al-Maady refuses the axis”.

Asma Al-Halwagy, from Tree Lovers Society in al-Maady, says that their reaction to the Maadi axis project started from the understanding of the viewpoint of removing encroachments and trespasses surrounding the railway running through al-Maady. She also mentions that they have reissued an alternative plan for lining the railway with a green belt protecting it from encroachments; a plan that was implemented before by lining this strip with 40 trees to protect it.

In addition to the use of trees as a fence protecting this vital facility, Asma believes that one big tree can provide Oxygen for four people, meaning that Egypt needs 25 million trees, which necessitates maintaining trees and increasing their numbers instead of cutting them off.

“Heliopolis Heritage Initiative” and “Tree Lovers Society” are correlating to find solutions that meet development needs, while at the same time maintaining green spaces. Tamer Hasan says that the initiative submitted a request to allocate numbers to Cairo trees and move them to other places, instead of cutting them off. While relevant authorities reconsidered the layout of the axis path as a result of a study conducted by “Tree Lovers Society” which depends on what is known as “the Green Planning”, represented by establishing axes around cities rather than inside them.

While the areas witnessing cutting of trees in Egypt are expanding in favour of development plans, activities of civil society are still limited on the ground, and restricted to prestigious neighbourhoods, where inhabitants adhere to the traditional aspect of their suburbs. Hurdles remain one and the same; namely, the fast pace in implementing projects that initiatives cannot keep up with, in addition to the absence of transparency in the pre-announcement of projects, the execution of which requires removing trees and green spaces.

Ahmad Eid, holder of a Master’s degree in international media from Bonn University, Germany, by a grant from German Academic Exchange Service (DAAD), holder of the certificate of “International Journalist” from the German “Deuthche Welle Academy”. A previous award winner of the best magazine article granted by Goethe Institute, Cairo 2015. He then joined the writers of the magazine, and won the prize of “Science is a Story” organized by Goethe Institute in collaboration with the German Academic Exchange Service (DAAD) in 2018. He also worked in the framework of projects with the German CiFAR organization.