News in our Anthropocene age is getting increasingly more terrifying: we’ve now reached temperatures that are 1°C hotter than pre-industrial times, each year that passes is one of the hottest on record, and Arctic ice is shrinking at an unprecedented rate. We hear of rising sea levels and catastrophic coral dying at the Great Barrier Reef, while floods, droughts, and forest fires seem to have become daily occurrences.

We’ve wrecked much of our planet – which is all the more shocking because already more than 150 years ago, Alexander von Humboldt warned that “the restless activity of large communities of men gradually despoil the face of the Earth”. As early as 1800, Humboldt talked about harmful human–induced climate change. He was the most celebrated scientist of his age but he was also a visionary thinker and the father of environmentalism. His contemporaries called him the most famous man after Napoleon and the ‘Shakespeare of Science’. 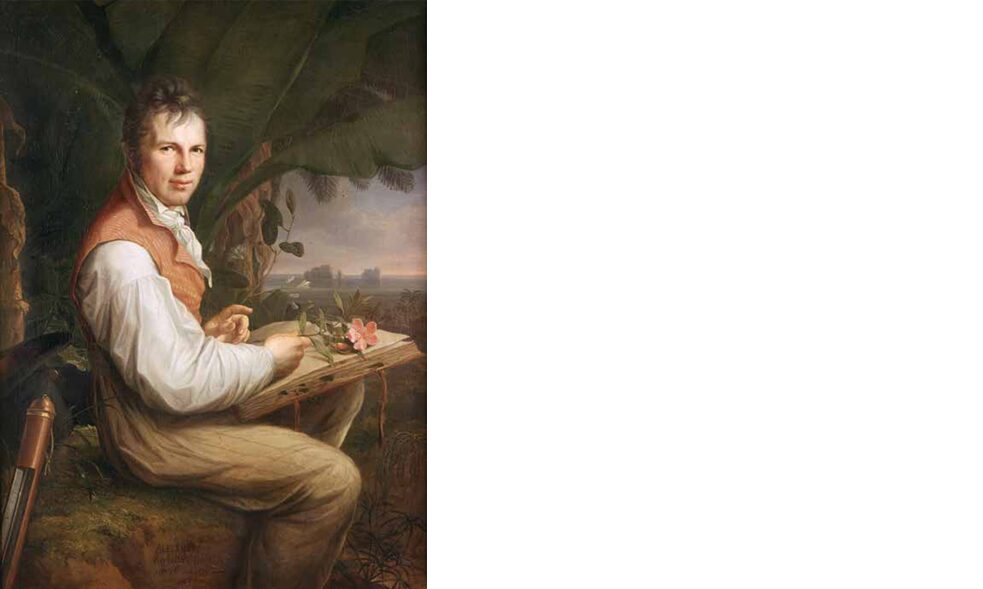 Born in 1769 in Prussia, he left his life of privilege and went on a self–financed daring five-year expedition across Latin America. The voyage took him deep into tropical rainforests and up the highest peaks of the Andes. It was a journey that changed his life and his thinking. He returned with a new concept of nature that still colors our ideas today. Humboldt explained nature as a web of life – a “net-like intricate fabric” as he described it. He saw Earth as a living organism where everything was connected, from the tiniest insect to the tallest trees. Humboldt’s nature was “animated by one breath – from pole to pole, one life is poured on rocks, plants, animals, and even into the swelling breast of man”.

He was a prescient proto-environmentalist who, at a time when the world turned the wilderness into an orderly patchwork of fields, wrote about the devastating effects of deforestation, monoculture, and irrigation – he even prophetically warned about gas emissions at industrial centers. He was a genius polymath who felt comfortable in many disciplines. Straddling the Enlightenment and Romanticism, Humboldt was as excited about scientific observations as about emotional responses to the natural world. Humboldt’s nature was pulsating with life and not a “dead aggregate”, he wrote, “everything announces a world of active, organic powers.”

It’s easy to portray Humboldt as a scientist obsessed with measurements – he did, after all, travel with 42 scientific instruments across Latin America – but he was interested in more than just long tables of temperature, barometric pressure, or altitudes. Humboldt was driven by a deep love for nature. No matter how dangerous, he wanted to experience the humid heat of the rainforest and bathe in expansive views across the Andes, even when he was buffeted by icy winds high up at almost 20,000 feet. Being in nature, Humboldt said, “exercises a soothing and calming influence”. Where other scientists were searching for universal laws, taxonomic precision, or grand theories, Humboldt insisted that we needed to use our imagination to make sense of the natural world. Humboldt understood nature like a poet and a scientist. “Pleasure lies in feeling not in reasoning,” he said.

Nature, he wrote, was in “mysterious communion” with our inner feelings. A crisp blue sky, for example, triggers different emotions than a heavy blanket of dark clouds. Tropical scenery, densely filled with palm trees and sculptural orchids, has a different effect than an open forest of white-stemmed slender birches, he insisted. All this didn’t mean that Humboldt looked at nature through a misty-eyed veil – quite the opposite. He spent a fortune on the best scientific instruments and believed in the usefulness of meticulous observations – but he didn’t exclude imagination from his investigations. He was a man who easily discussed meteorological records, geomagnetism, and geological phenomena but then wrote in the same book about the “magic charm” of poetry, the importance of landscape painting, and the delights of spring when “our minds... may rejoice in the inspiration of nature”. Humboldt was driven by a sense of wonder – and this love for the natural world shaped his life and his thinking.

It’s this awe for nature which I believe is missing in today’s environmental debates (at least in the political arena). From global discussions such as the Paris Climate Summit in 2015 to national debates about fracking, or local issues such as the protection of a small wetland area – most of these negotiations are based on dry data projections, statistics, and careful legal wording. All of this is of course important, but where is the realization that we will only protect what we love?

How can we save our planet when so many of us are for the greater part of our lives far removed from nature? How is the next generation going to connect to Earth if the moist smell of a forest after a summer shower or the sound of the dawn chorus are as unreal as the next computer game? How are we going to care about the threat to our oceans, air or forests, if these are just statistics or colorfully-rendered infographics?

An almost visceral appreciation of nature seeps through much of Humboldt’s writing. Of all of the books that Humboldt published, Views of Nature was his favorite. It was a completely new literary genre that combined poetic landscape descriptions with scientific observation. Published first in German in 1808, it was eventually available in eleven languages and became a huge international bestseller. For Humboldt the prose in Views of Nature was as important as the content. He insisted that his publisher did not change a single syllable because otherwise the “melody” of the sentences would be destroyed. 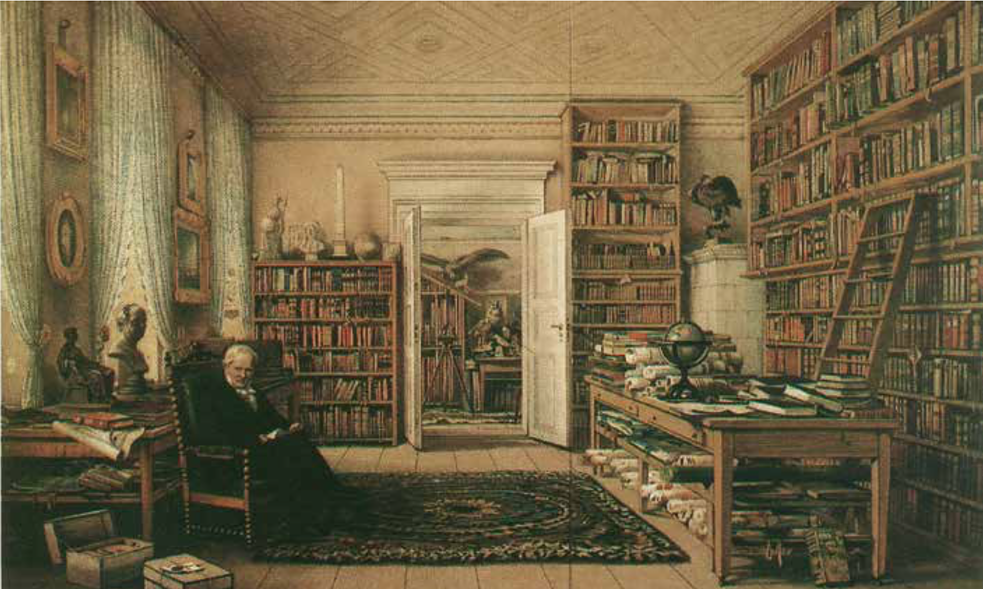 He wrote of leaves that unfolded “to greet the rising sun like the morning song of birds” and of monkeys that filled the jungle with melancholy howling. As night turned to day, he saw that stars created a “quivering double image” in the low-laying haze above the plains in Venezuela, while rainbows danced in the mists at the rapids of the Orinoco – optical magic, he called it, in a game of hide and seek. “What speaks to the soul,” Humboldt wrote in another book, “escapes our measurements.” Poets and artists might have engaged with this but no scientist had ever articulated anything like it. Humboldt wanted to excite a love of nature.

The study of nature, he wrote, “does not consist in a sterile accumulation of isolated facts”. Other scientists might have been satisfied to find order through classification or universal laws, but for Humboldt imagination was equally important. One look at the heavens, he said, proved his point: the brilliant stars “delight the senses and inspire the mind”, yet at the same time they move along a path of mathematical precision.

Humboldt wrote dozens of books – international bestsellers that inspired scientists, artists, and poets alike. Walt Whitman, for example, wrote his celebrated poetry collection Leaves of Grass with a copy of one of Humboldt’s books on his desk, and painter Frederic Edwin Church followed Humboldt’s footsteps through South America. Church’s magnificent The Heart of the Andes (which is today at the Metropolitan Museum of Art in New York) was his artistic answer to Humboldt’s new concept of nature. Even Captain Nemo in Jules Verne’s famous Twenty Leagues Under the Seas is described as owning the complete works of Humboldt. And Ralph Waldo Emerson declared that Humboldt had swept clean “this sky full of cobwebs”. 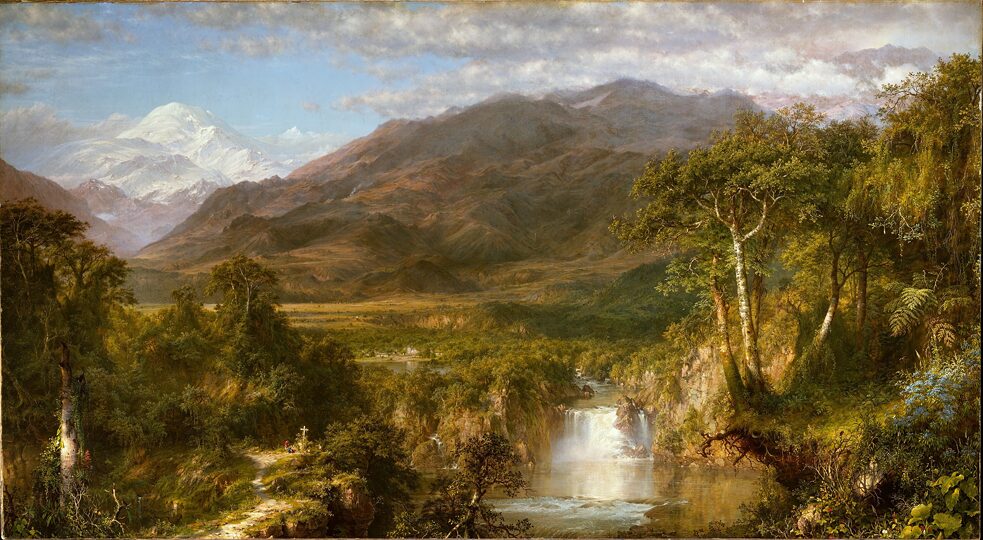 This celebration of awe, magnificence, wonder – whatever you name it – is what we need to introduce into today’s climate change debates. The study of nature, Humboldt believed, was as much about the external world as it was about the inward world. He said that nature only existed in so far as we perceive it through our senses, and therefore “the external world and our ideas and feelings melt into each other”. He wrote that the sensuous was connected with the intellectual, and he talked about a deep-seated bond that unites science, art, and poetry.

It’s this interdisciplinary approach, coupled with his insistence in the value of imagination and emotions in our understanding of nature, that makes his work so relevant today.

Andrea Wulf is the author of several award-winning books, including ‘The Invention of Nature’ (2015), about the naturalist, explorer and geographer Alexander von Humboldt. Wulf makes the case that Humboldt synthesized knowledge from many different fields to form a vision of nature as one interconnected system, that would go on to influence scientists, activists and the public. The book has won the Royal Society Science Book Award 2016, Costa Biography Award 2015, the Inaugural James Wright Award for Nature Writing 2016 and the LA Times Book Prize 2016, as well as awards in Germany, China, France and Italy.