50 German comics for 50 years of Goethe-Institut in Australia

In celebration of our 50th birthday, we are thrilled to present, in partnership with LE MONDE diplomatique, “White Bunnies, Arabic Cola and the Last Passenger Pigeon: comic stories from Germany”. This unique comic exhibition, curated by Karoline Bofinger, features the comics of 50 German artists – to mark 50 years of the Goethe Institut in Australia. Furthermore, we are especially proud to also present 6 Australian artists who contributed to the exhibition. This fits perfectly to celebrate another anniversary: 70 years of successful diplomatic relations between Germany and Australia.

Of the 56 artists 52 were published in LE MONDE diplomatique, whilst the other four were designed specifically for our exhibition, featuring themes which range from life in the most locked down city in the world (Melbourne!), to the iconic Mr Chicken and his dreams of journeying to Berlin.

LE MONDE diplomatique (LMd) is one of the biggest monthly newspapers which reports on international politics and economics. First founded in 1954 by the Paris daily paper, Le Monde, with the goal of informing French diplomats in the colonies in Africa and Indochina (now the countries of Vietnam, Laos, and Cambodia formerly associated with France), there are currently 31 editions of LMd in 22 languages.

The German-language edition of LMd was launched in 1995 by the cooperative of the daily newspaper taz and the Swiss weekly WOZ. LMd has been editorially independent of Le Monde since 1996. Since 2005, the last cover page of the German edition of LE MONDE diplomatique has been home to avant-garde, critical comics. Drawn especially for the newspaper, the comics engage with topics from politics and everyday life: mostly cheeky, often absurd, and sometimes melancholic. The concept pays homage to the beginnings of modern comic strips, which emerged at the end of the 19th century, traditionally adorning the last page of newspapers. The German edition is the only one to publish this comic page. Every month the comic editor of LMd, Karoline Bofinger, selects a comic artist or cartoonist to design this page and capture their personal view of international politics and current events. Over the years, LMd has been able to win over some of the very best German and international comic creators to design the last page of each issue.

“White Bunnies, Arabic Cola and the Last Passenger Pigeon: comic stories from Germany” brings together works by renowned illustrators and comic artists from the German alternative comics’ scene as well as illustrators and picture book authors and fresh new talents.

The collection of 56 comics show how the artists have mastered the special challenge of the large page format as well as the limited narrative framework. Their works lie at the intersection between high art and trivial culture, which has become the hallmark of postmodern visual art.

The exhibition opens at the Goethe-Institut in Melbourne on the 8th April 2022 at 6pm, and will be on display until the end of the year. We look forward to seeing you there!   Registrations for the opening: Eventbrite 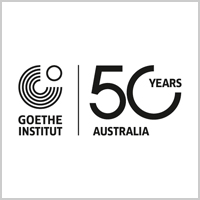