Once a month, the Goethe-Institut Toronto invites the author or translator of a recent work relevant to German-Canadian topics for an evening of conversation, debate and questions from the audience. Watch the recordings of these conversations here.

The Goethe-Institut Toronto was delighted to host award-winning authors Colm Tóibín & Susan Bernofsky for a conversation about Thomas Mann's The Magic Mountain and Tóibín's new book The Magician.

Nigerian-German author Olúmìdé Pópóọlá in conversation with Canadian author, screenwriter and filmmaker Jordan Tannahill about her latest work When We Speak of Nothing and more.

We present a conversation between author and academic Adrian Daub and open Government advocate Bianca Wylie. Adrian recently wrote What Tech Calls Thinking, a playful, insightful account of the ways tech tries to subvert criticism of itself by adopting counter-cultural tropes and language.

We are very happy to present the conversation of authors Antanas Sileika & Michael Winter, and artists Kathryn Walter & Benjamin Klein about The Occidental Hotel, the final work of Canadian critic and author John Bentley Mays.

The translator of Paul Celan, Pierre Jolis, in conversation with Toronto academic Nicholas Hauck about his translations of the works of Paul Celan and other poetry. They go on to touch on the issue of objectivity, the textual fidelity of translations and their borderline with creation, and answer questions from the audience.

We are pleased to present a conversation of the Goethe-Institut's Carter West with Professor Monica Black. Professor Black recently published A Demon Haunted Land with Metropolitan Books (Henry Holt). In it she asks startling questions about Post-War German history, reconciliation with the past and the strange ways a better future was moved towards.

John Paul Kleiner of the DAAD meets author Andrew Demshuk at the English Book Club of the Goethe-Institut Toronto to talk about his book Bowling for Communism. 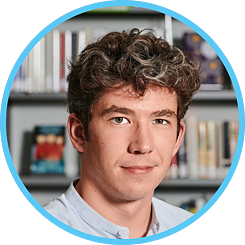