"You cannot protect the environment unless you empower people, you inform them, and you help them understand that these resources are their own, that they must protect them. It's the little things citizens do. That's what will make the difference. My little thing is planting trees." - Wangari Maathai (Nobel Peace Prize, 2004).

In the subsequent articles, the Goethe-Institut Kenya explores the current state of environmentalism in Kenya. 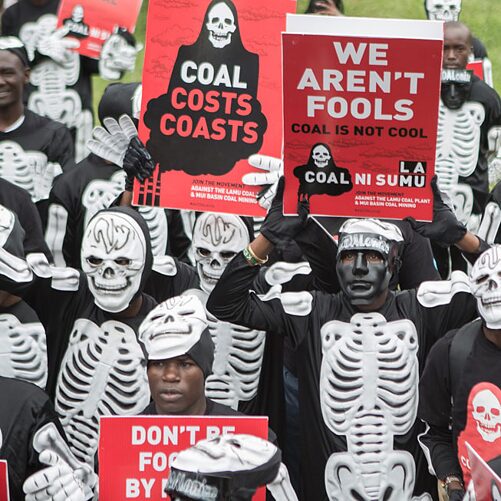 Through the streams of information that flow to us via the Internet, television and newspapers, we catch a glimpse of a devastating catastrophe every day. Unprecedented droughts, forest fires, storms and floods, images that evoke in us both a sense of urgency and one of despondency, stand right next to - and yet in sharp contrast to - images of a seemingly intact world.

Where are we now?
Plasticbag ban

In August 2017, Kenya enacted a total ban on the use, manufacture, and import of single-use plastic carrier bags. Although this is not the first ban—similar attempts were made in 2007 and 2013—it has by far been the most strictly enforced, with fines as high as​ ​$40,000​. Before the ban, supermarkets alone in Kenya distributed​ ​100 million plastic carrier bags​ a year, so by that figure alone, the ban has kept millions of new plastic bags out of the system.

Towards the end of 2019, air pollution in New Delhi triggered a public health emergency that made for apocalyptic headlines. Breathing in the throat-burning air was equivalent to smoking fifty cigarettes a day, and in some parts of the city, air pollution levels were twenty times greater than what is deemed safe by the World Health Organization.

For many people, the presence of the climate crisis crystallizes in a small moment—perhaps a single image or string of words—and, with that realization and the urgency that accompanies it, action. Often, these moments resonate with a sense of personal threat (“This is real, and I am going to be negatively affected”), but many other times, it resonates with the realization that others are suffering.

Green Resistance in Mathare
Where Planting Trees Is Radical

In Nairobi, a city highly segregated by class, trash ends up in – and becomes integrated into – informal settlements. Waste is not just part of the landscape; it comprises it. Dumped from other parts of the city, trash becomes embedded in the soil, burned into the air, piled up until it changes the topography.

The Case of Ondiri Swamp
Citizen Environmentalism is not Dead

If you were driving down the slick, new, multi-laned Southern Bypass, the urban superhighway that forms a giant arc around the lower half of Nairobi, you would pass by one of the most important urban wetlands in Nairobi likely without even a second glance.