The Goethe-Institut Philippinen presents a cinematic retrospective exhibition of the work of acclaimed German director, Werner Herzog, Saturdays and Sundays, from May 6 to June 4, at the FDCP Cinematheque Manila. Over the course of 55 years, Herzog’s film career expanded the possibilities of cinema as an art form and transformed a wide range of genres.

Considered as one of the greatest figures of the New German Cinema, Werner Herzog’s body of work consists of films and documentaries that capture men and women at psychological extremes. Herzog and his films have received critical success through the numerous awards he has won and has been nominated for. Herzog’s first feature film, “Signs Of Life” won him his first Silver Bear Extraordinary Prize of the Jury at the Berlin International Film Festival in 1968. Other notable awards include Best Director for “Fitzcarraldo” at the 1982 Cannes Film Festival, and the Grand Prix at the same festival for “The Enigma of Kaspar Hauser” in 1975.


The list of films part of the Werner Herzog Retrospective are: Werner Herzog’ homage to the 1922 F.W. Murnau movie is an execution of passionate connoisseurship. Set in the heart of 19th century Germany, the protagonist, Jonathan Harker from Wismar, wants to negotiate with Count Dracula in Transylvania about the purchase of a house. But after the first night, Harker finds out that Dracula is a vampire and his flight turns out to be hopeless. Dracula enters with a ship in Wismar and spreads the plague in the city. Even the sacrifice of Harker's wife Lucy cannot stop the disaster. Though Dracula dissolves in the sunlight, Harker now spreads fear and terror in the world as a kind of new vampire. Loosely based on the true story of a 16th-century conquistador Lupe De Aguirre, the film features an expedition down the Amazon, with Aguirre, the second-in-command of a Spanish force, searching for the mythical riches of El Dorado. In the hostile environment, Aguirre is driven into madness by the heat, hunger and exhaustion, disease, and danger from imminent native attack. He mutinies and kills his commander, and carries on the dangerous mission for power and greed. Considered both a great cinematic vision, and a great folly, the film „Fitzcarraldo“, is about an opera-loving madman who is determined to drag a ship overland from one river to another, to accomplish his goal of building an opera house in the jungle, and hire the famous Caruso to sing in it. A Herzog favorite, Klaus Kinski, plays the title role with a shock-haired appearance and an inimitable performance. The feared bandit Cobra Verde is hired in Brazil in the early 19th century by a plantation owner to manage sugar cane production and slaves. However, when he gets his employer’s three daughters pregnant, the latter wants to get rid of him. Cobra Verde is sent to West Africa to procure new slaves and in the best case, not come back alive. But in West Africa, Cobra Verde is developing an unimagined career. In space, a gigantic exodus comes to pass. To save himself and his species, an alien from the Andromeda galaxy lands on Earth and tries to build a city for his species. The plan failed, and instead he gets a job at the CIA. Mankind also faces a climate disaster and prepares a space mission to find a habitable planet. Queen of the Desert is a 2015 American epic biographical drama based on the life of the British traveler, writer, archaeologist, explorer, cartographer and political officer Gertrude Bell. The film follows Bell's life chronologically, from her early twenties to her death. In 1829, a mysterious young man who can barely speak, appeared in Nuremberg. His peculiarity—a product of his previous life of having been locked up in a basement and devoid of human contact, awoken the curiosity of the Biedermeier society, who immediately take advantage of his naivety. Armed with authentic documents from the 19th century, Werner Herzog’s masterpiece, The Enigma of Kaspar Hauser, is a brilliant and unforgettable take on mental illness during that time. In Bells from the Deep, Herzog examines Russian mysticism, after the fall of communism, and a man who claims to be the reincarnation of Jesus. The film’s first half primarily concerns itself with a Russian faith healer, and interviews with Russians, and segments on the religion of Siberian nomads. The second half is concerned primarily with the legend of the lost city of Kitezh. The film takes place in an alternate universe consisting entirely of little people, and follows an uprising at an institution of indeterminate purpose. Demanding a fellow inmate be set free, prisoners trap their supervisor in his office, then proceed to run amok, conduct mock weddings, crucify a monkey, and set potted flowers on fire. Woyzeck is the tragic tale of a hopeless soldier named Woyzeck, who murders his wife for her infidelity. Struggling in the face of physical torment via his commanding officers, and later on by a doctor who takes advantage of him, Woyzeck is an observational approach to a man’s descent into madness. 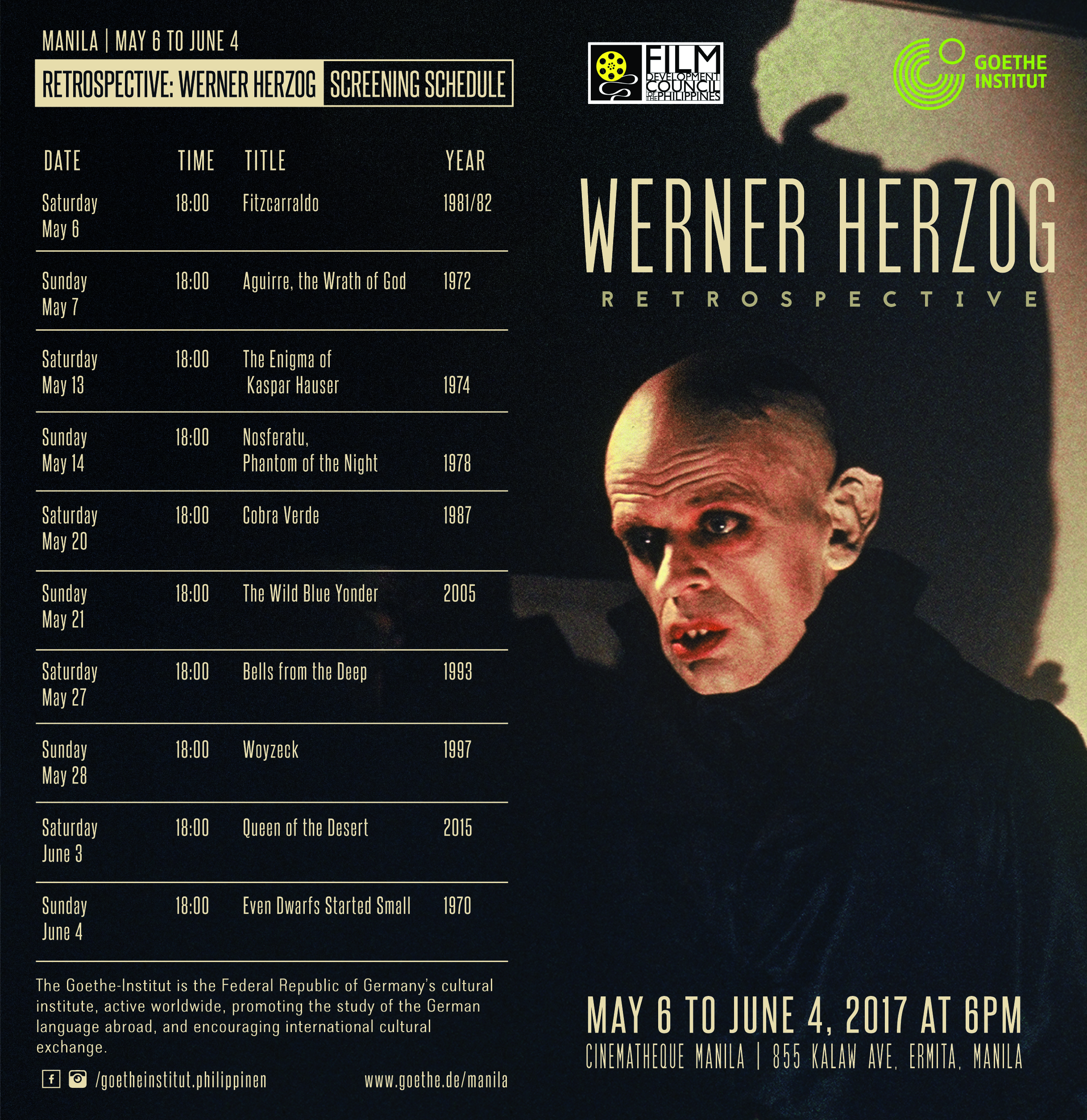 Admission is free. Seating is on a first come, first served basis.