No doubt, there are many evident faults in the Indian educational system. But that is not our topic. Our comic artist and chronic doodler Priya Kuriyan takes a tongue-in-cheek look at some flaws in the school system in India. By using fictional dictionary definitions to suit the context of the subject matter in a series of vignettes, she gives the reader a glimpse into the anxieties that plague the parents of Indian schoolchildren: the devaluation of the arts in education, the innate need for schoolchildren to please authority of any kind, the exasperations of the Indian teacher, and the sometimes tragicomic events that are so much a part of Indian school life.

A strong desire for their kids to achieve something. 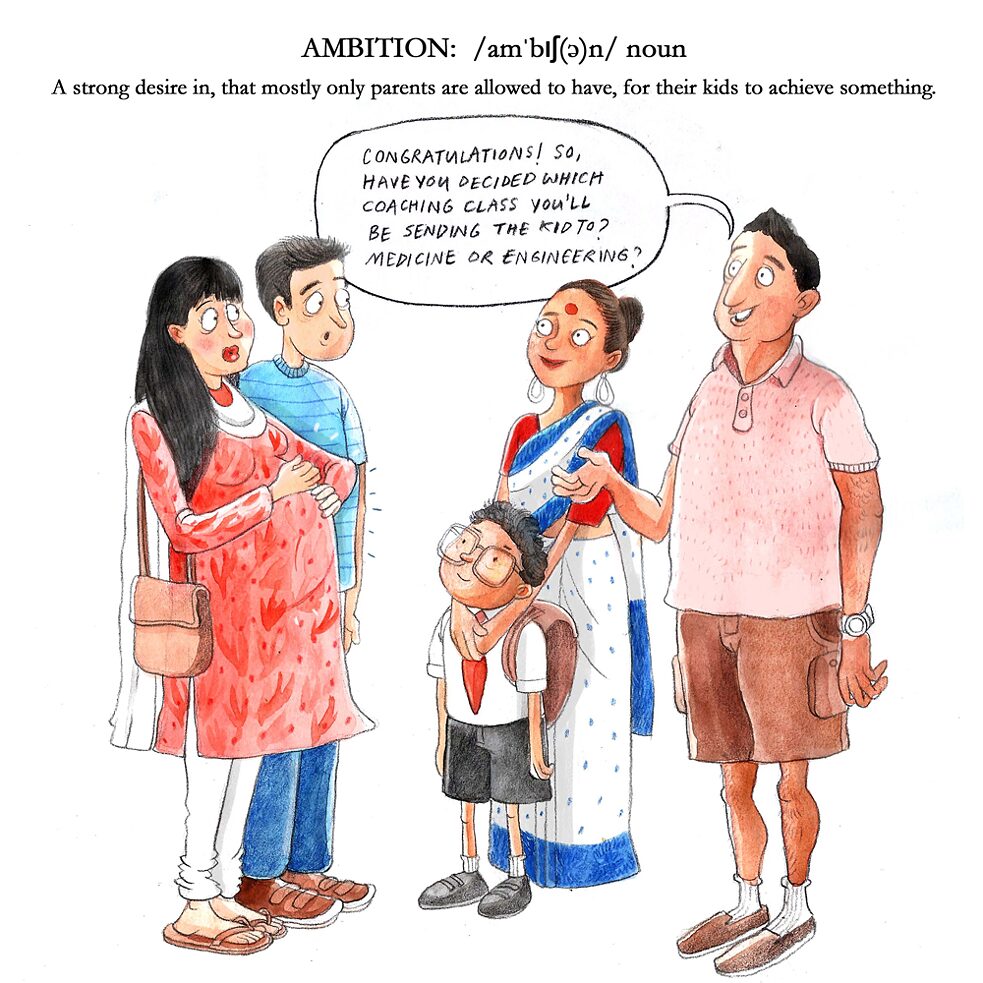 “Congratulations! So, have you decided which coaching class you’ll be sending the kid to? Medicine or Engineering?” | Illustration: © Priya Kuriyan

A special social event, such as the Annual School Day, when you celebrate something and get a chance to confidently goof up on stage because behind that hideous make-up, no one could guess who you really are. 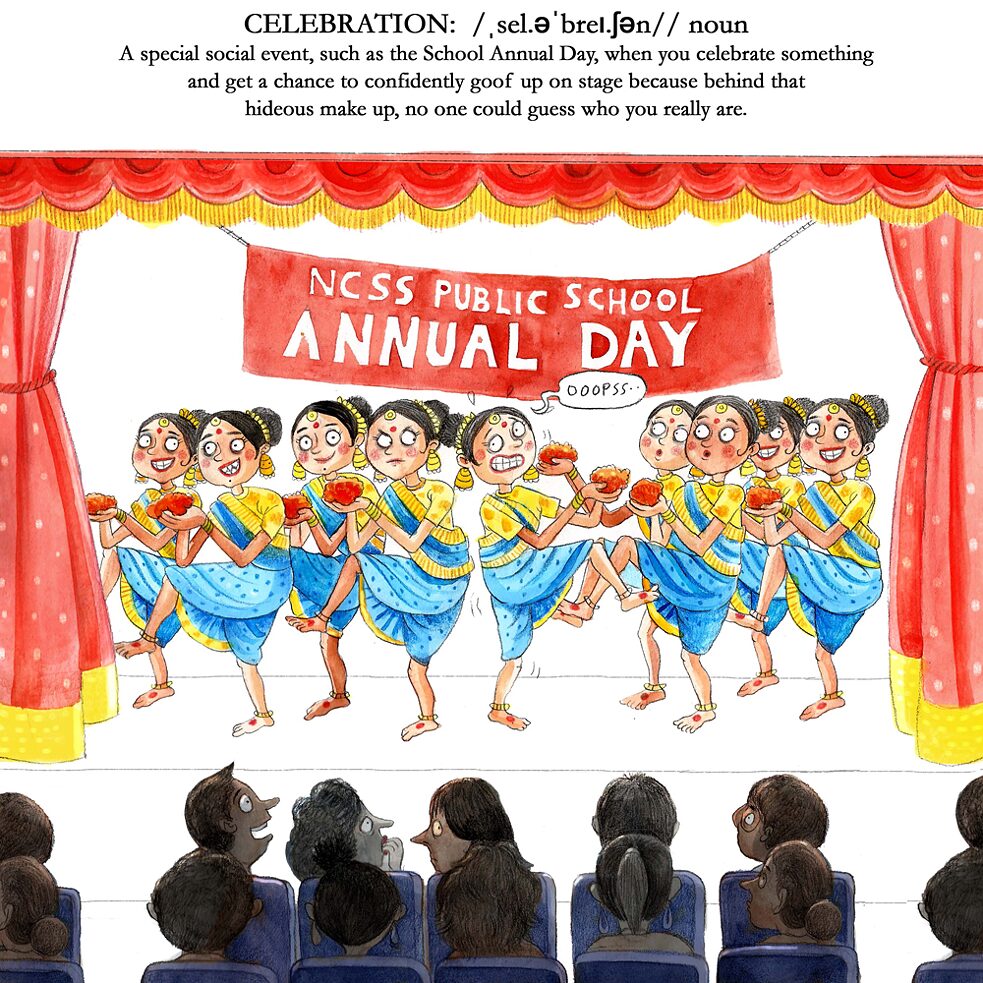 Extra teaching or instruction take outside of school, mostly due to peer pressure that ist supposed to miraculously change the graph of your downward spiraling  grades. 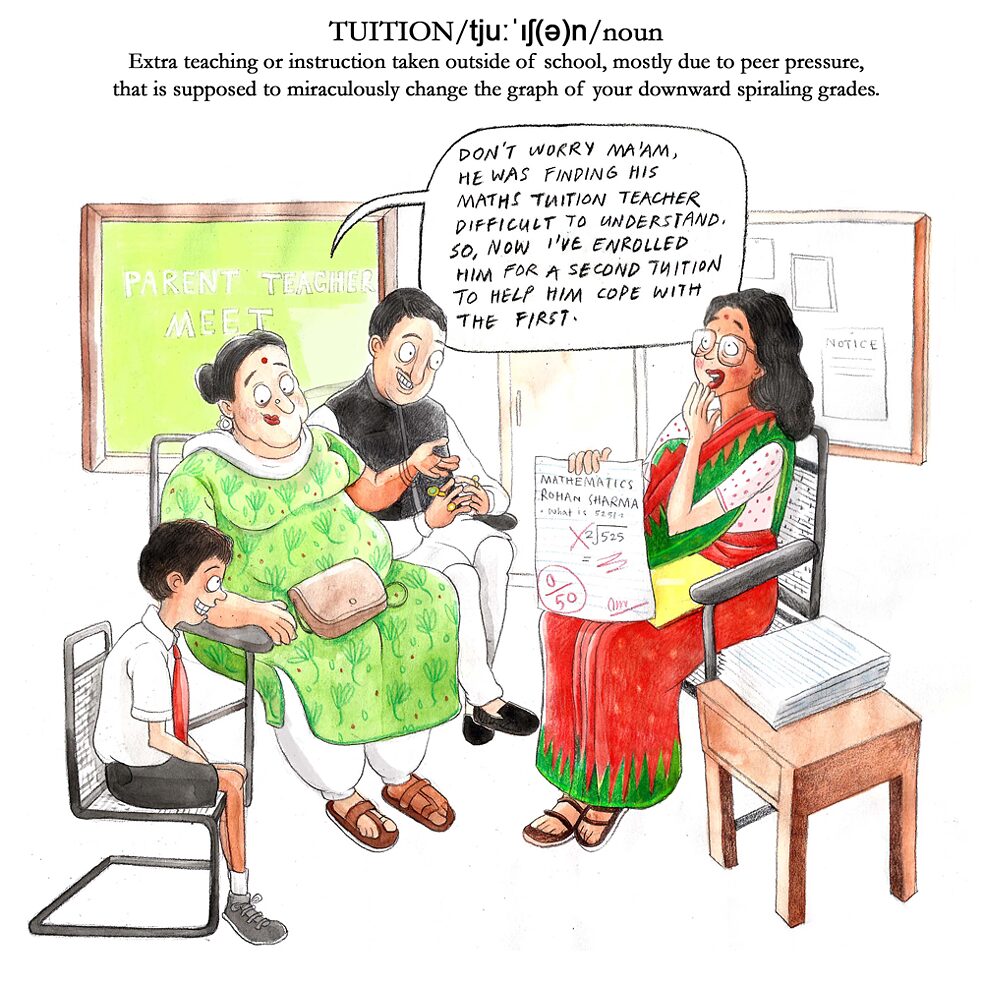 “Don’t worry, ma’am, he was finding this maths tuition teacher difficult to understand. Sow, now I’ve enrolled him for a second tuition to help him cope with the first.” | (Notice Board) Parent Teacher Meet | Mathematics Rohan Sharma: What is 52 3/2 | (sheet on board) notice | Illustration: © Priya Kuriyan

A thing that is accepeted as true o ras certain to happen, without proof. 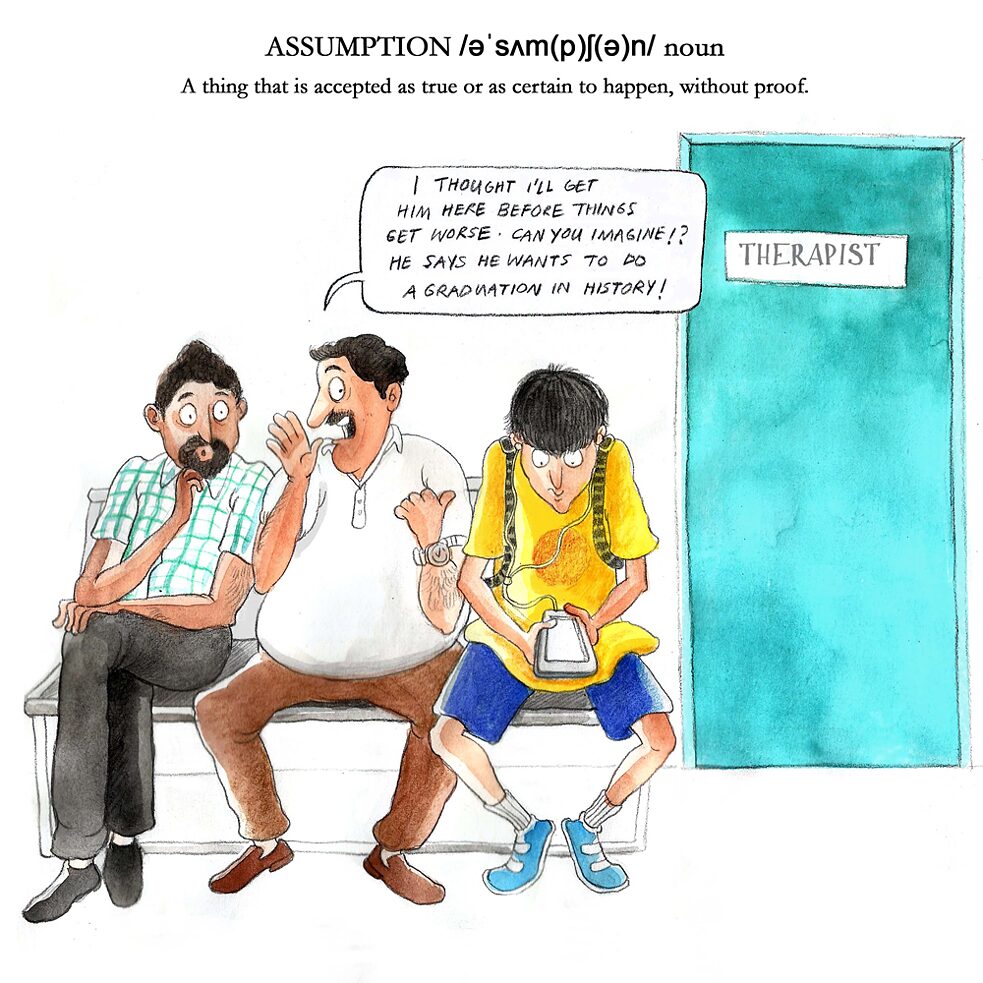 “I thought I’ll get him there before things get worse. Can you imagine!? He says he wants to do a graduation in history!” | Illustration: © Priya Kuriyan

A state of despair, typically one which results in rash or extrem behaviour especially during examinations. 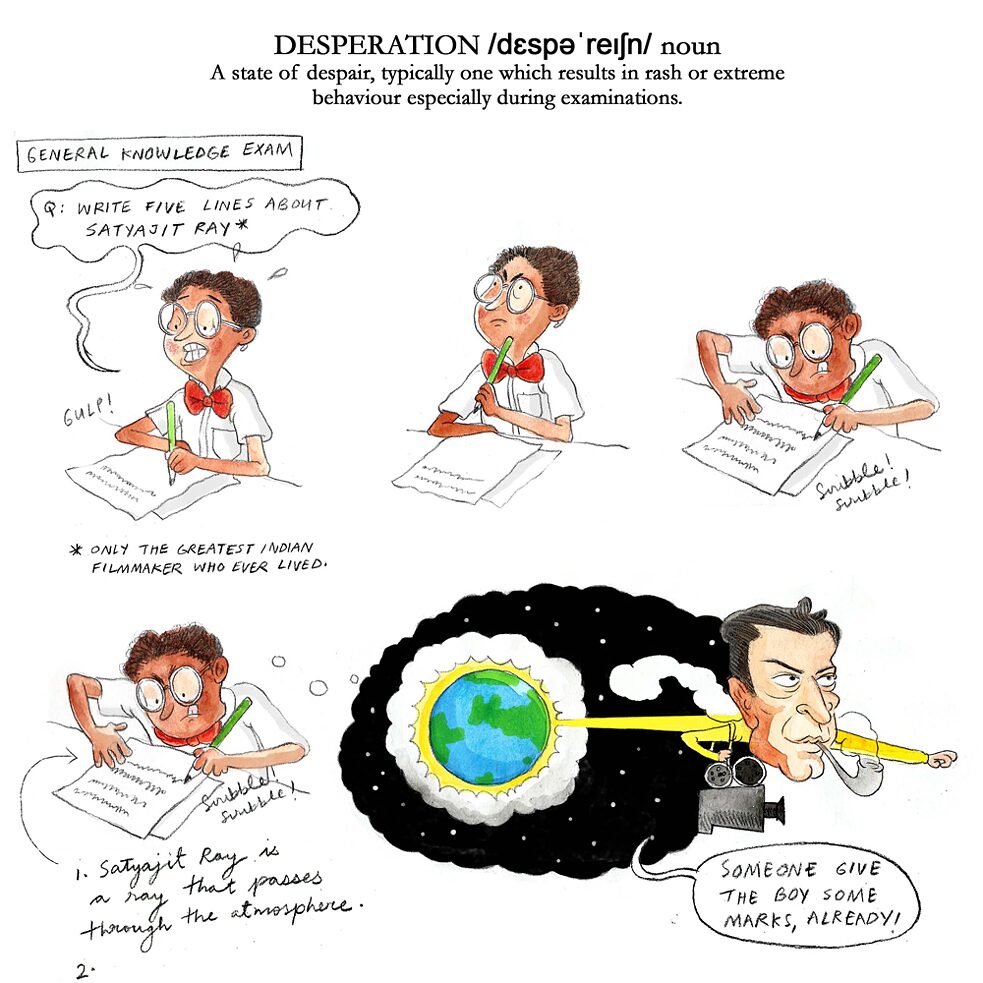 Write five lines aobut Satyajit Ray | * only the greatest filmmaker that ever lived | Scribble, scribble! | 1. Satyajit Ray is a ray that passes through the atmosphere. 2. | Someone give the boy some marks, already! | Illustration: © Priya Kuriyan

The punishment of being kept in school afterhours. Which is not so common as „Standing outside the classroom with your hands in the air!“ 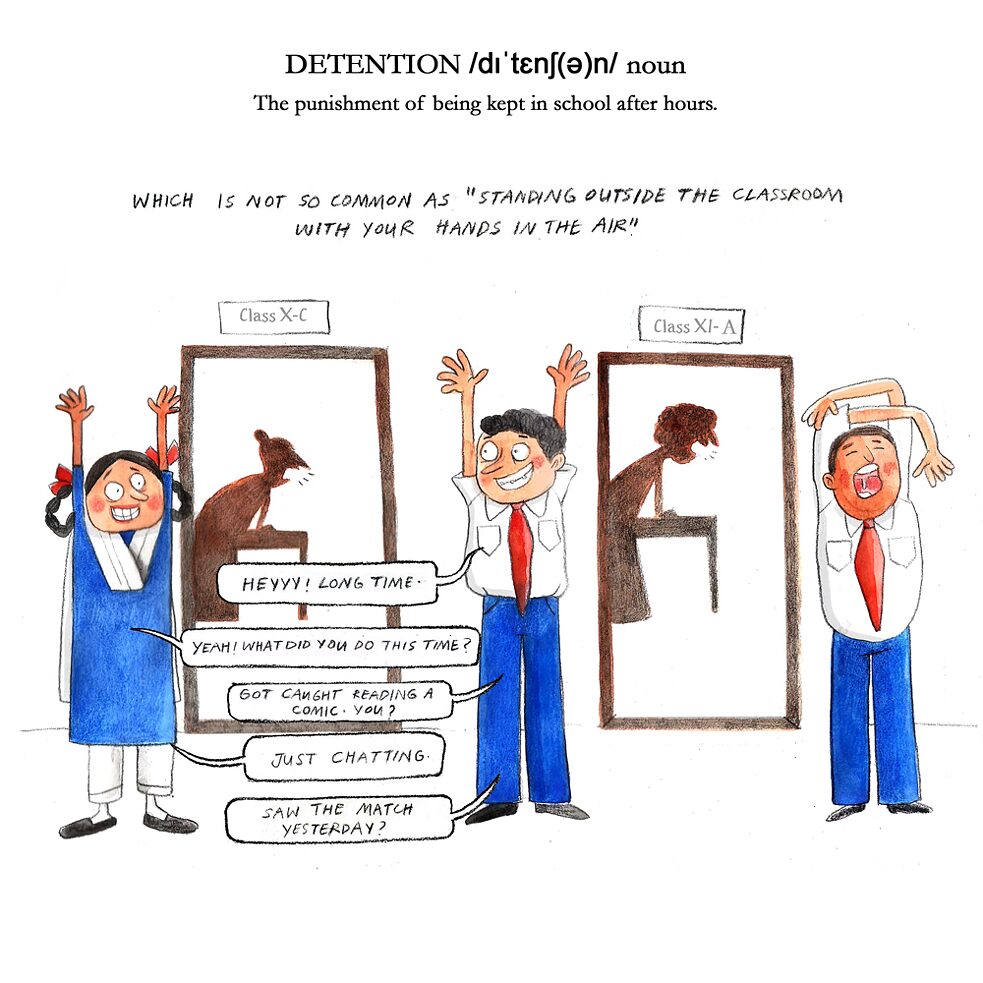 A sudden outburst of something such as emotion, especially anger. COMMON CLASSROOM EXPLOSIONS 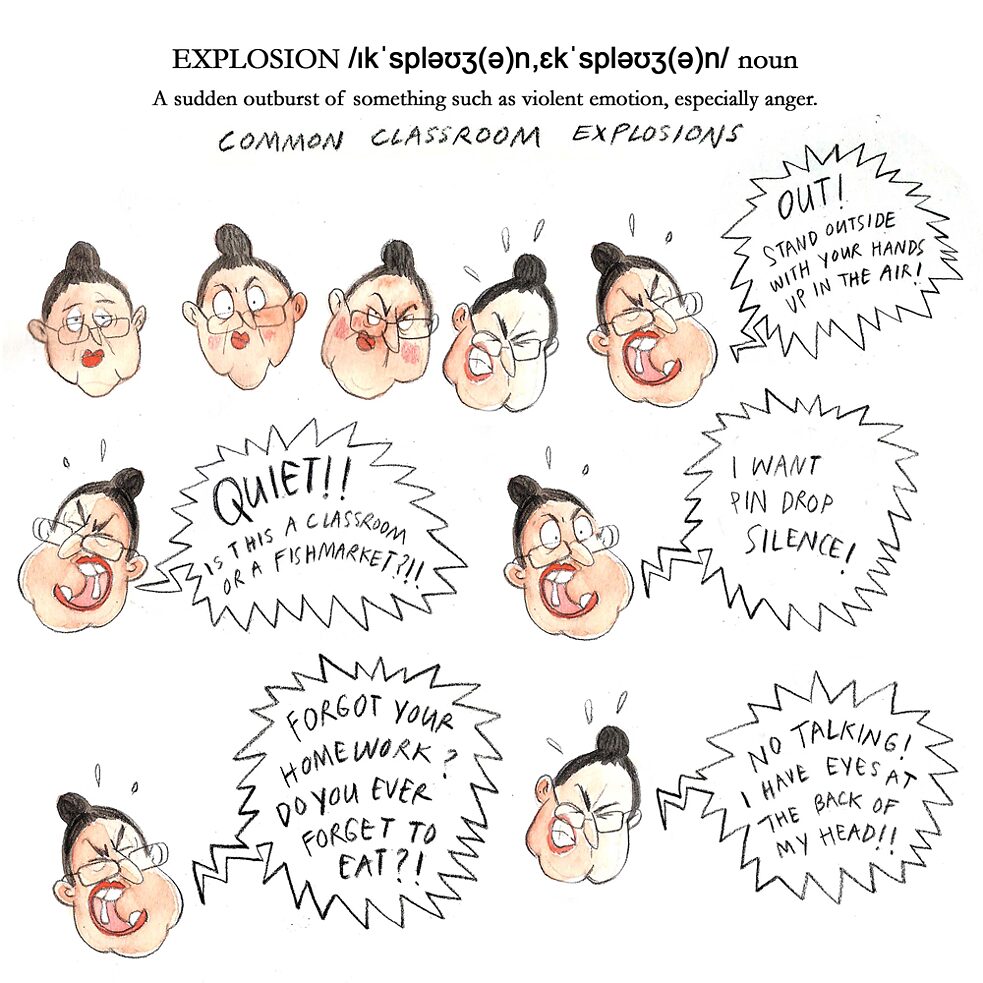 QUIET! Is this a classroom or a fishmarket? | Forgot your homework? Do you ever forget to eat? | Out! Stand outside with your hands up in the air! | I want pin drop silence! | No talking! I have eyes at the back of my head!! | Illustration: © Priya Kuriyan

Priya Kuriyan is a children’s book illustrator, author, comic maker, and chronic doodler. She lives and works in the city of Bangalore and in her spare time makes funny caricatures of its residents.