The fires that devastated the Kabylia region in summer 2021 caused numerous deaths and destroyed thousands of hectares of forest land. The tragedy unleashed an outpouring of solidarity and gave rise to support initiatives both in Algeria and in its diaspora.

The horrors of summer 2021, when fires ravaged the majority of Mediterranean countries including Spain, France, Italy, Portugal, Greece, Tunisia, Algeria, and Morocco, among others, are seared into the memory of the people of this region. From north to south coast, the same despairing images: gigantic blazes of fire, devastated forests, destroyed homes, burnt animals.

In 2021, the Joint Research Center (JRC) of the European Commission mapped the wildfires, which erupted in 39 countries and consumed 1,113,464 hectares of land.

On the south coast of the Mediterranean, Algeria was among the countries hit hardest by the fires, seeing 134,237 hectares of its forests destroyed. On 12 August, more than 90 fires were counted in Kabylia, a third of which in the province of Tizi-Ouzou alone. In this region, the fires spread rapidly from 9 August onward and lasted for about ten days.

The flames not only devastated thousands of hectares of forest – they also damaged or destroyed many homes and, most tragically, cost numerous lives. By 14 August, more than 90 victims had been counted. The authorities, however, have stayed mum about the real extent of the loss of life, which could be much greater.

On social media, the causes of the fires were heatedly discussed, with authorities suspecting criminal acts and experts, such as Zineb Mechieche, pointing to climate change. The shocking images and videos circulating on social networks gave rise to a nation-wide campaign of solidarity for the Kabylia region.

Hundreds of trucks loaded with clothes, foodstuffs, medicines, and electrics (generators, chainsaws, etc.) poured in from all parts of the country, at times exceeding the needs of affected towns and villages, which ended up directing donations elsewhere in the area.

In the diaspora, Algerian émigrés launched money collections online in aid of the disaster zones back home. This was especially the case in France and Canada, home to some of the largest Algerian expat communities.

Numerous initiatives have sprung up as well, most notably mental health workshops for children from villages strongly affected or even bereaved by the fires.

To the mind of H. L., president of the Collective Ixulaf n Teftilt N At Σissi in Tizi Ouzou, “the fires of summer 2021, while deadly and devastating, have also given hope to the citizens to reclaim their multicultural identity. A year after the lockdown due to COVID-19, we witnessed the return of that Amazigh solidarity in villages and between villages which was so important to our ancestors. Under the current economic conditions, which are already difficult, we have seen women and men giving away what they have in acts bordering on sacrifice.”

He says the urgency and scope of the catastrophe “have prompted the villagers to return to the old ways of village organisation in their attempts to adapt to the current situation.” Indeed, for centuries, villages in Kabylia had preserved to their unique organizational structures based on mutual aid and solidarity in times of crisis. It is often the village committees that coordinate and act in concert when evacuation or emergency assistance are required. This is especially vital for remote villages, which are difficult to access quickly by public services, such as firefighters or medics. 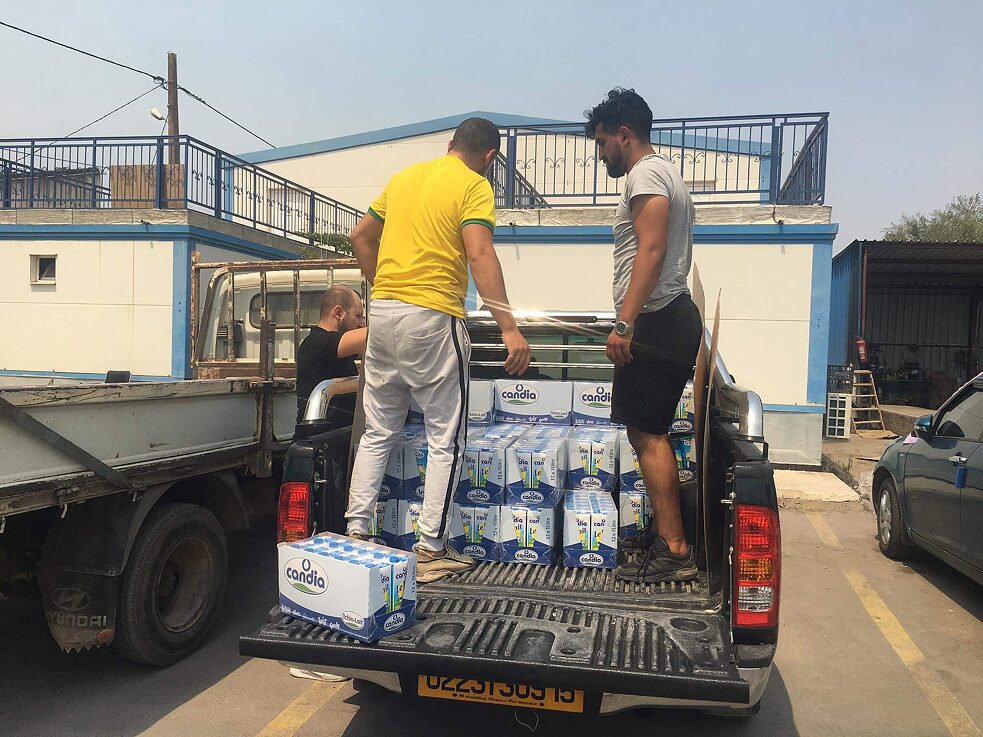 A truck carrying aid, Ait Aissi, Tizi Ouzou | ©Privat Aomar Ait Slimani, village committee member of Ait Ouabane, argues that the solidarity campaign for the victims had been launched “quickly and hastily, leading to great losses in foodstuffs, medicines, clothes, etc., because these goods did not correspond to the real needs of the victims. Several villages that were not in need and affected by the fires have benefited from the generosity of donors.”

Part of the problem, Aomar continues, was that “it was almost impossible to coordinate and manage a crisis of such magnitude.” There were only a handful of young people trying to put together contact lists and to document the actual needs of people on the ground.

Today, one year after the tragic events, many wonder if anything has been done to preserve this spirit of solidarity and build for the future. What about the reforestation of the region, for example?

Boualem Tabouche, president of the Association nationale jeunesse volontaire citoyenne (National Voluntary Young Citizen Association), stresses that “the community association, as well as the forest conservation departments and main national park directorates in Kabylia – Djurdjura and Gouraya – are very active. The will to revive the ecosystem in this region is there and strong. However, every region has its particularities in terms of fruit trees. The olive tree, for example, cannot grow above a certain altitude. Moreover, not all fruit trees have the same planting season.”

Forestry experts agree that any reforestation programme must involve the right species and strains to avoid so-called genetic pollution in plants. There is also discussion whether devastated forests should be replanted or are able to regenerate themselves naturally. 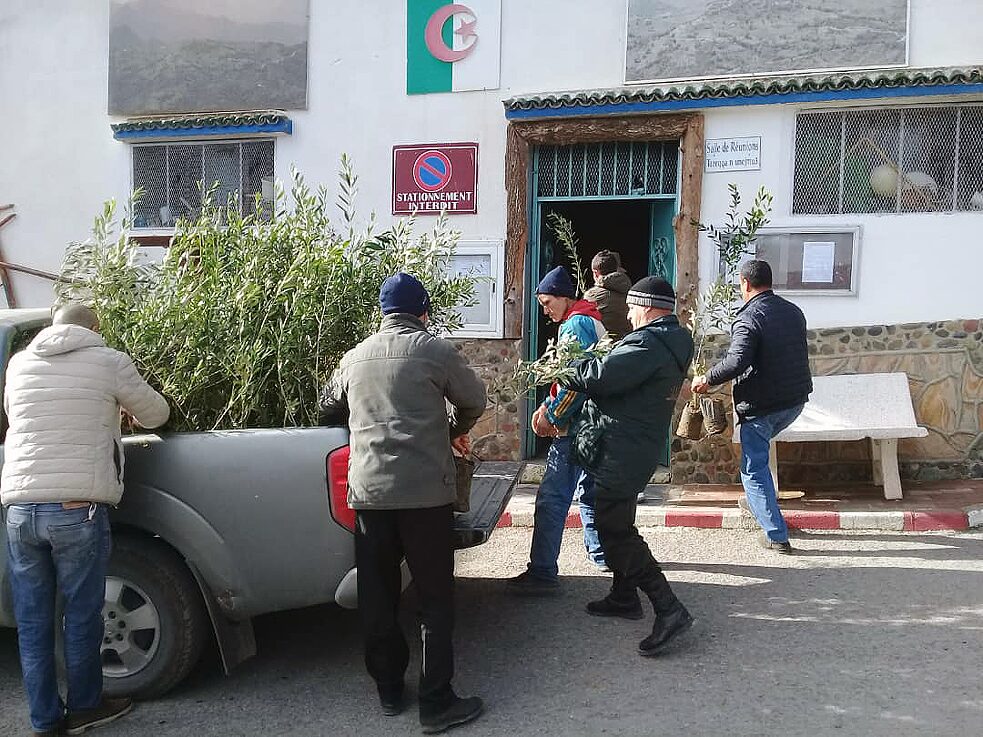 Volunteers transporting tree seedlings for reforestation collected by the National Youth Volunteer Citizen Association, Akbil, Tizi Ouzou | ©Privat “The best planting period for trees like pines, cedars, etc., is October to December, which allows plants to adapt to the harsh winter conditions and to continue growing all year round,” explains Lounès Meziani, mountain guide and environmental activist. “With fruit trees we can wait until January, or even mid-February for certain species. As for the reforestation of the burned areas in Kabylia, here we mainly have oak, ash, and elm, which can grow back naturally. But olive trees and fig trees need a little human push.”

Lounès points to the reforestation campaigns that have already taken place, deploring that “thousands of trees planted in January and February have been abandoned and many have died due to drought. I must say that volunteers often don’t return to these plants to water them and those that do survive are eaten by livestock, especially cows, sheep, and goats. That’s why we recommend to plant in secured places.”On the restoration of Kabylia’s forest that has disappeared as result of wildfires, forest engineer Amar Naït Messaoud says that, “as a general rule, we should give it an observation period of two to three years. In forest ecosystems, in particular the sub-humid zone [like most of Kabylia], the potential for regeneration is very high. In the meantime, it is worth carrying out sanitation measures, that is, cutting and clearance of charred wood. Possibly, we could also take the opportunity to make the groves in question more accessible by trail networks.”

“In the event that this regeneration does not occur [after three years], we decide to reforest,” he adds. As for the risks of genetic pollution, Amar says it could be easily prevented by “using local nurseries that have certified plants.” 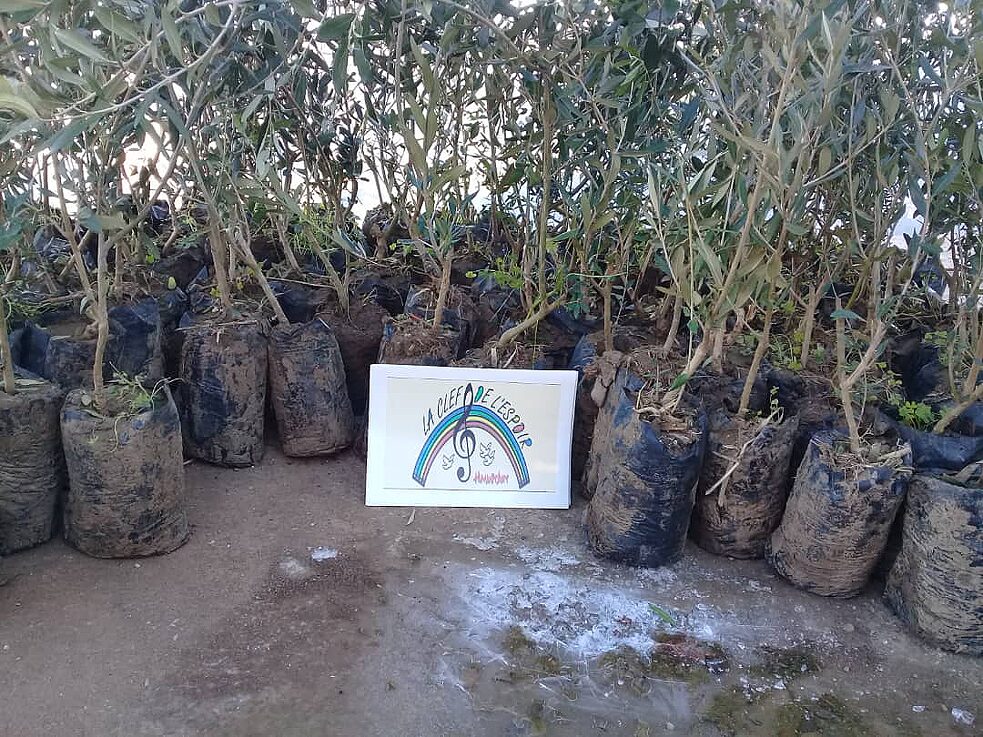 Tree seedlings for reforestation collected by the National Youth Voluntary Citizen Association, the sign says "the key to hope", Akbil, Tizi Ouzou | ©Privat Finally, he points out that most of what had burned down in Kabylia was not forest in the strict sense of the word, but rather maquis shrubland, which, according to him, “can regenerate itself. The ideal would be to convert it to forest.”

The challenges faced by the Kabylia region remain enormous given the scale of material damage and human loss caused by the wildfires. Hundreds of families have seen their homes and livelihoods destroyed and are still mourning the loss of their loved ones. They are vulnerable and face an uncertain future.

Besides ecological restoration, Kabylia needs support at different levels, including economic, environmental, and psychological measures, to help its people overcome this ordeal and look to the future with greater confidence.