When residents of Zagora in southern Morocco protested in 2017, demanding the right to safe drinking water, the authorities arrested 23 of them in what became known as the “thirst revolution”. The residents of Zagora and its environs, however, continue to suffer from a water shortage.

Environmental activists in the region have begun to step up their efforts, with the aim of forcing the Moroccan state into taking measures to solve the crisis. A particular focus of the campaign is to limit the cultivation of watermelons, which require quantities of water, in this arid, semi-desert area.

“I spend hours in front of this small well, for a few litres of water. It’s barely enough for me to drink ... I no longer think of washing myself. That is something I and my children can only dream about.” This is how Aisha, a 45-year-old housewife, describes the impact of the water crisis on her life.

The scarcity of water haunts the inhabitants of Zagora, which in Morocco's southeast, on the border with Algeria. Aicha, who lives in “the parched district” of Zagora, adds: “We stand at the wells and wait for long hours, especially in summer. Our suffering is multiplied when we don’t find water for drinking or even cleaning, and this has led to our children getting ill.”

Owing to the drought and the desertification, most of the town's menfolk have moved away from Zagora in order to seek jobs in the cities. The women and children are left behind to deal with the shortage of water. Fatima, a 60-year-old woman who also lives in the “parched district” in Zagora, says: “Our men left home to find a living, and it’s us women who have to cope with the rise in temperature and the thirst. All we think about is water. It is everything to us….it is a struggle we face every day.”

In 2017 the first spark of the “thirst revolution” in Zagora erupted in the “parched district”. The residents turned out to demand their right to drinking water. This resulted in the arrest of almost 23 of them and the state prosecutor brought charges against them of “gathering and engaging in an unauthorised march.”


In response to the crisis, the Association of the Friends of the Environment (Zagora) is working to find environmental solutions that will provide residents with access to safe drinking water.

“We organised seminars and study days to discuss the crisis, and we ended up with a set of recommendations, ideas and insights which were addressed to all concerned,” says Jamal Akchbab, the association’s president. “We worked to educate the population about the importance of water rationing. We also wrote to the authorities to warn them of the repercussions of the crisis in the region in terms of human life, flora and fauna.”

The association held a series of meetings to explain to residents and officials the implications of climate change for the region.

Jamal Akchbab adds: “The most important manifestations of climate change that the region is facing are record high temperatures, low rainfall, increasing desertification, soil salinity and the risk of seasonal flooding.”

As Akchbab explains, the causes of water scarcity include demographic pressure on water resources as well as poor management and the misuse of water. He also points out that there is a lack of vision and that the state has no plan or strategy to meet the challenges and achieve water security.

He adds: “There is significant under-investment in water facilities, not to mention the adoption of agriculture that is unsustainable and unsuitable. That is what led to the protests in Zagora in 2017.”

Moroccan King Mohammed VI warned officials about the water crisis and ordered them to form a body to address the situation and to provide drinking water for all.

The Association of the Friends of the Environment, however, says that the situation has worsened and that the crisis has even spread to areas in northern and central Morocco.

Growing watermelons in a city starved of drinking water

While the inhabitants of Zagora are suffering from shortages of potable water and inadequate rainfall, this dry and semi-desert area is known for the cultivation of fresh, sweet-tasting watermelon and this requires large amounts of water.

As Akchbab says: “The water shortages affecting the region are directly related to the cultivation of watermelons. For the past 10 years, the region has suffered from this kind of agriculture, which consumes large quantities of groundwater.”

The Association of the Friends of the Environment (Zagora) has issued multiple appeals to the authorities to relieve the people’s suffering and regulate watermelon cultivation. 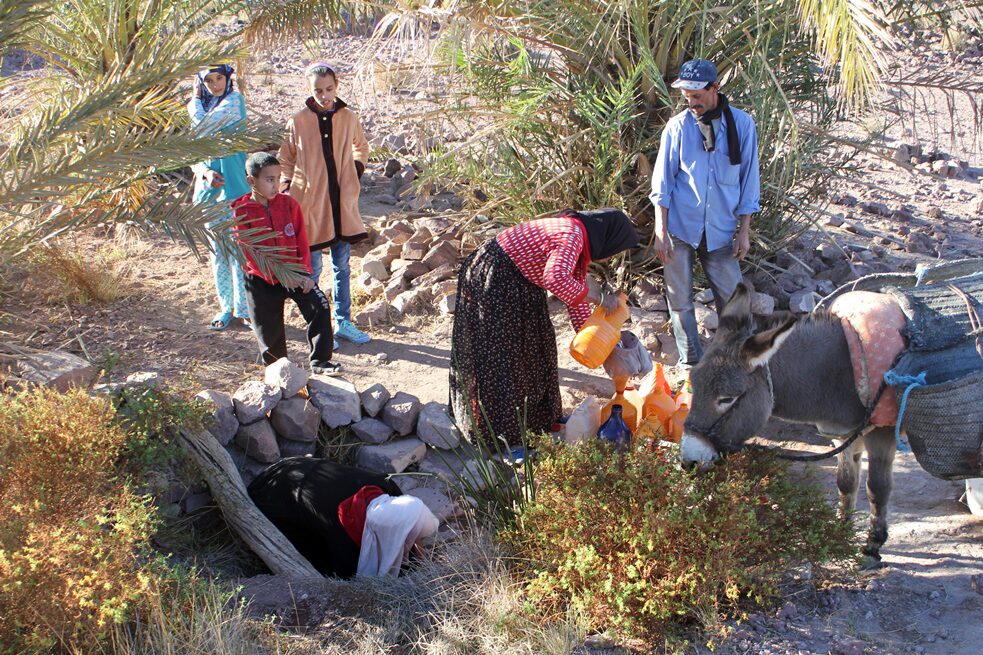 Ilhalm Al-Talbi
Residents of the Moroccan city of Zagora have to manage the water shortage as it takes up a big part of their lives.

Depleting the supply of drinking water

The association revealed figures for the area of land under watermelon cultivation in the region, noting that production had exceeded all expectations this year. According to these figures, the number of hectares allocated to the crop exceeded 24.000 and production exceeded 1 million tons. In the process, this agriculture used more than 30 million cubic meters of groundwater, which is also the source of the drinking water.

Zagora is the first region in Morocco to harvest watermelons in May each year, and the melons, which contain 92% water, are the first to hit both Moroccan and European markets.

Rainfall in the area does not exceed two to three days throughout the growing season, with an annual average of less than 61 mm.

The Association warned repeatedly of the dangers of cultivating watermelons in an area called Fayja, which is regarded as a local source of potable water. However, these warnings went unheeded, and this has led to the drying up of wells and exacerbated the shortage of drinking water.

The association said that it has made major efforts to limit watermelon cultivation and to regulate it through a series of seminars and study days, in addition to making presentations at various levels.

It expressed its deep regret, furthermore, that its recommendations and ideas were not taken into consideration. The association has also called for “intervention to protect water resources in the oases from depletion and over-exploitation by the increasing cultivation of watermelons in order to safeguard human existence in those areas.”

Saleh Bakkas, an environmental activist in the Zagora region, has written to the water authorities about the crisis and published articles warning about the cultivation of watermelons and their impact on the water table. He reports: “We have demanded and continue to demand the regulation of watermelon cultivation, which is exacerbating the shortage of drinking water in the region. We continue to wait for the state to respond.”

“Watermelon cultivation is damaging to the environment, the land and to humanity”

Bakkas goes on to say that “as a result of the cultivation of watermelon for export to Europe, people in Zagora and its environs no longer have access to potable water. Watermelon cultivation is damaging to the environment, the land and to humanity.”

According to Bakkas, the authorities are unable to regulate their cultivation. Civil society is active and in protest, and yet no one is responding. Indeed, production is continuing to expand, stretching all the way to Tata in the south.

Measures adopted by the state to solve the water crisis

Pressure from environmental activists in Zagora on the relevant authorities has prompted the Moroccan state to take some measures to address the issue. These include support for the exploration of groundwater and the completion of more than 75 test wells over the past 5 years in co-operation with the Souss-Massa Draa Hydro Agency. This has provided water to make up the deficit in the supply of drinking water to rural areas.

It is notable that the central water authorities, with the co-operation of the Reservoir Agency and associated bodies, have produced a number of studies relating to water purification in rural areas with a full cost estimate of MAD 2 million (€ 187,000).