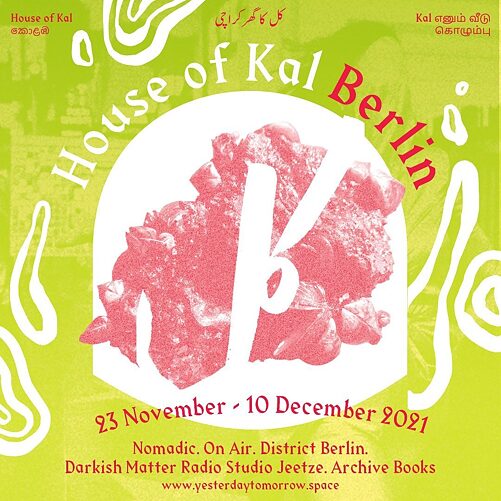 a language where yesterday and tomorrow are the same word. Kal was conceived on a plane ride from Karachi to Istanbul in September 2019 from continuing conversations and resonances of queer world making at the shores of the Arabian Sea and the Indian Ocean earlier that year. The tentaculos  work began in January 2020 and unfolded over  in pandemic time, working in its ebb and flow through ruptures, repairs, care and collectivity.

In the final iteration of this chapter of kal , we celebrate the coming together of different streams from the Houses of Kal Karachi, Colombo and Berlin, from radio kal - where the sounds of yesterday and tomorrow meet - and the first in a series of books of kal. Keeping in mind the realities we find ourselves in, a new COVID surge and the closing of District*School Without Center’s current physical space, House of kal Berlin goes nomadic and on air.

kal’s ghostly presences will manifest this winter with the first episodes of radio kal broadcast live on kal’s new website from knowbotiq’s Darkish Matter Radio Studio in rural Jeetze, an online film screening as well as conversations, a publication launch and a performance in the closing rooms of District and Archive Books and online via zoom.

On radio kal at www.yesterdaytomorrow.space


radio kal RJ Promona Sengupta and dark ecology specialist Yvonne Wilhelm of knowbotiq offer practical tips and tricks learned from the ghostcolonial lands of Jeetze to callers and listeners who are struggling with ghosts haunting their own gardens and plants. Through two radio episodes that are aired according to the lunar almanac of dark goddess Kali, they gather together important information about post-industrial farming, plant migration and seed sovereignty in the wake of coloniality, the relationship of the supernatural with plants, food practices of the Bengal Famine and the otherworldly claims of psychoactive wild weeds.

RJs Captain Pro and Nav Chief Hydra hole themselves up in the DMRS Jeetze transmission station on the dark night of the New Moon in Sagittarius, exactly one month after the New Moon of Kali, the goddess of Death. Marking the end of the cycle of the dark goddess in this earthly realm, this transmission takes a deep dive into the realm of ghosts and horror radio programming.

A program on past and present embodiments of gender nonconformity in Pakistan, Sri Lanka, Indonesia and beyond, on memories of ancestral practices and politics of holding spaces of care.

Tamarra, who is in a dilemma over Tamarra’s own historical roots as a waria, takes a pilgrimage to understand the practices of non-binary communities in various regions in Indonesia. On this 2016 journey, Tamarra met a group of ancient Bugis sacred persons in South Sulawesi called Bissu. Identity politics, class conflicts, cultural rituals, and religion are the keywords in the documentation captured by Tamarra.

A journey through dense and complex expressions below and beyond the language of ‘transgender’ that infuse past and present modes on gender nonconformity in Pakistan, Sri Lanka, Indonesia and beyond. The contrasts and commonalities between wandering terms of otherwise non-categorical genders in these regions are bridged through Tamarra’s documentary film Pilgrimage to the Menelusuri Bissu \ Pilgrimage to the Bissu Community and a conversation on how each of them engages with memories of ancestral practices and politics of holding spaces of care through their specific practices.

5 December, time TBD, at Archive Books’ Publishing Practices
From the Arabian Sea, Indian Ocean & Atlantic Tides
Bringing together the publishing-based practices of The Many Headed Hydra, SCROLL and The Packet, this discussion traces the entanglements, constellations and relations built through making and playing together in print.

RITUALS proposes queer and trans feminist ecologies, embodiments and mythmaking. An ode to transterritorial alliances that disrupt binary contours of time and being, assembles practices of queer world building in extended pandemic time, amidst deep ecological and social transformations, offering an expression of anti-colonial resistance and joy.

Lip-Sing for your Art!, A Bilingual Karaoke is an interactive work on the relationship between the language of bilingual art publications and the performative voice of the reader. It is part of the collective’s long-term project series of Institutional Terms, which focuses on the transformation of modern Arabic in the context of the rise of Arab cultural institutions in the past decades. The series concerns the emergence of a language shaped by global art institutions.