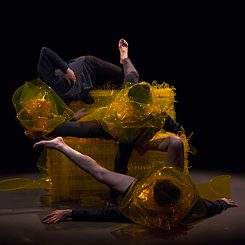 We foster bilateral cultural exchange programs between Germany and Malaysia. We initiate film series, exhibitions, concerts, seminars and festivals, always with the goal to facilitate artistic production, reception and reflection involving actors from both countries.

The selection of the Science Film Festival 2021 is available online as video-on-demand service. Please register here to receive the link to the films available in Malaysia and the password that enables you to stream the films free of charge during the entire festival period.

Digitisation is a transformation pocess and a creative task for civil society. The magazine “One Zero Society” invites to a global exchange about our future.

Plastic in the oceans, forest fires in the Amazon: on Ecologues the Goethe-Institut presents constructive answers to climate change and brings together regional experts in global debates on sustainability. Above all, the question arises: How do we survive the human age?

The Goethe-Institut invites experts and creatives worldwide to exchange ideas on colonial power relations, their consequences and, above all, how to dismantle them: in discourses, interviews, opinion articles and art projects. For a decolonized and non-racial world.

Deutsche Film AG (DEFA) was founded exactly 75 years ago in Potsdam-Babelsberg. By reunification, it had produced about 700 feature films, around 2,500 documentaries and short films and 950 animated films. Today, the entire film output of East Germany is administered by the DEFA Foundation. Together with the DEFA Library, this film series was put together to mark the 75th anniversary.

I saw a lamb

In response to the global situation, artistic director of Toccata Studio Ng Chor Guan (Malaysia) and the Paranormal String Quartet (Germany) created an experimental travel journey documentary based on a trip from Germany to Malaysia in April 2020 within the Virtual Partner Residency Programme by Goethe-Institut.

TOUCH - a dance piece in 13 trailers

As the third part of the trilogy CONTINUE, which was developed in 2018, TOUCH was planned to be premiered in April 2020 at the theaterimballsaal Bonn and to tour in Malaysia in July 2020. As a response to Covid-19, the dance piece TOUCH has been sliced into 13 short video trailers, which are now available online as a digital format of the work and will be part of future live performances as well.

How can we reconnect with the spaces we live in, especially in the wake of the COVID-19 pandemic? The artists of Sound of X propose answers as they explored their sonic environment. The resulting video soundscapes offer a unique experience of our cities.

Tune in
Podcasts Around the World

The Goethe-Institut gets stuck in your ears and opens your eyes. Goethe-Instituts across the globe produce podcasts on different topics and in different languages. Choose from a range of diverse podcasts from around the world. Dive in and have fun listening.

A Goethe-Institut project inviting artists, thinkers and creative minds to participate in one of the most important discussions of our time.

The project “Time to listen” presents a collection of stories - told by storytellers from all genres of art, from all over the world.

Movements and Moments is now online!

The project Movements and Moments - Feminist Generations sheds light on indigenous feminist activism from the Global South in the form of comics.

(6. April 2020)
What does the coronavirus crisis mean for each individual and for our society? Intellectuals and artists around the world respond to this question for the project “Day-Afterthoughts” with a view to the present and with a view to a time afterwards. We begin with the Indian historian Romila Thapar.

In 2019 the Freedom Film Network and the Goethe-Institut jointly applied and successfully have been awarded a five-year project grant under the European Union which aimes at strengthening the civil society movements in Malaysia.

SEADSTEM is a project of the Goethe-Institut in South East Asia in cooperation with the South East Asian Ministry of Education Organization. It gives teachers the opportunity to jointly develop and exchange high-quality resources for innovative concepts in STEM teaching.

A multi-year project that plunges into a broad spectrum of experimental sound and music cultures in Southeast Asia, enabling dialogue within the region, with Europe.

In collaboration with LIA (Leipzig International Art Programme) the Goethe-Institute offers artists from Southeast Asia a three-month residency at the Art and Culture Centre Leipziger Baumwollspinnerei.

The Artist-In-Residence exchange program or AIR aims at supporting and encouraging contemporary visual arts and promoting international exchange between Frankfurt and Kuala Lumpur. The program offers young and emerging artists the opportunity to gain experience regarding their own artistic practice and to build an international network.