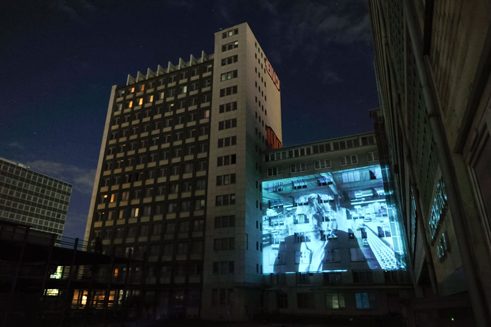 Screening in Hamburg-Hammerbrook | Photo: © A Wall is a Screen

Cinema does not necessarily need a movie theatre. In cities like Hamburg films are projected onto the facades of buildings. These mobile film performances have opened up new perspectives in the way public space can be used.

The Neue Wall in Hamburg is a fancy shopping street full of upmarket boutiques and during the day is a bustling consumer heaven. “When a film about drug addicts shooting up in dark backyards, far away from any counselling centres, is projected here, it shows a completely different aspect of the city,” says Sven Schwarz. “It is these opposite extremes that we find so exciting.” Schwarz is co-founder of a collective that goes by the name of A Wall is a Screen that came into being within the framework of the Hamburg Short Film Festival back in 2003. The group, which now has six members, started to project short films of no more than 15 minutes in length onto facades in the deserted inner city of Hamburg. “The response was immediately huge,” describes Schwarz. “The first showings attracted around 500 people.”

Who does the city belong to?

A Wall is a Screen – registered as a non-profit association – has in the meantime celebrated its 222nd performance and toured in 27 countries. This non-commercial cultural project has set itself the goal of “repurposing public space,” says Schwarz. And at the same time it also tackles such issues as public participation. “We convey the message to the people that – this is your city.” The films should be somehow in line with the places they are being shown in. For example, the group projected the film On a Wednesday Night in Tokyo (2004) by Jan Verbeek several times in underground stations, because the seven-minute-long film shows Japanese commuters being crammed into an underground train compartment that is already bursting at the seams. This led to a stimulating merging of film image and the real-life scene. Whenever the members of A Wall is a Screen travel to performances at home and abroad, they take an arsenal of about 800 short films with them in order to be able to adapt their program flexibly.

Cinema with a certain guerrilla charm

With their idea to “light up” the city, the group in Hamburg were real pioneers in the field of mobile cinema. In the meantime, however, a large number of related initiatives have got off the ground in other big German cities. In Berlin, for example, there is a group called Mobile Kino, made up of former film projectionists and cinema operators, that enlivens the city’s urban spaces with digital film performances – especially the area along the banks of the river Spree. The dates and times of the performances are announced in advance on Facebook. Werner Kantor is a qualified camera man, living in Berlin, who is also on the lookout for places where his Nomadenkino can show films – films that are particularly appealing to a young, urban audience. The Kater Holzig Club and the Platoon Kunsthalle in the Prenzlauer Berg district to name but a few of his venues. It is in fact the charm of guerrilla cinema with its atmosphere of the mysterious and the unusual that keeps initiatives like these alive.

Back to the days of the silent movie

In contrast, the project run by Tobias Rank and Gunthard Stephan called Wanderkino – Laster der Nacht (Travelling Cinema – Lorries in the Night) focuses in many ways on the early days of cinema. On the one hand, the films are all silent films, they are projected onto a screen stretched over the side of a lorry and they are musically accompanied by violin and piano. On the other hand, their company is following in the footsteps of traditional travelling cinema that became popular around the end of the 19th century – before cinemas became permanently established institutions. Every year Rank and Stephan appear at the Open Air Season in Clara Zetkin Park in their hometown of Leipzig – before an audience of up to 400 people. There have also been other performances, for example, in clearings in forests and in cemeteries. The films are projected on 16mm film – “After all we want to give people a real movie experience,” says Rank.

The social side of cinema

Flexibles Flimmern (Flexible Flickerings) is what Holger Kraus from Hamburg calls his project – a project that since 2006 has enabled him, two or three times a month, to discover some quite extraordinary locations for his mobile cinema. It all started with a performance of Tomas Vinterberg’s Dogma film, Das Fest (The Celebration, 1998), in the now-demolished Kallmorgen mansion in Hamburg. Kraus, a movie buff and trained event manager, who in his former jobs did not manage to find any meaning, recreated the scenes from the film in the former home of the architect’s family. He sat with the rest of the audience at a long table – like the family in Vinterberg’s drama about abuse. Kraus knows a lot about how to stage events.
The impulse for Flexibles Flimmern came about mainly from the desire for some kind of social exchange on a larger scale. “The social side of cinema is what sparked the whole thing off,” says Kraus. His performances, which are mostly geared to an audience of 100, also have political aspirations, alongside the event aspect. This was clear, for example, when he showed the film Burma VJ (2008) by Anders Østergaard in a news program of a Hamburg TV station. Burma VJ is a film about journalists who risk their lives, smuggling film material out of Burma.

Krauss finances his project via the money he takes in. The entrance tickets cost 10 euros, reduced tickets 8 euros. A Wall is a Screen, on the other hand, is booked by event organisers like film festivals, cultural institutions or even by the city of Hamburg itself. As improvised as the performances might appear – enormous logistical effort goes into the project behind the scenes. “We invest 80 per cent of our time in office work,” says Sven Schwarz. “We have about 200 licensors with whom we work: rental companies, distributors, filmmakers.” Schwarz also reported that obtaining approval for the city performances was, on the other hand, as a rule not particularly complicated. A Wall is a Screen has experienced a lot of goodwill; the police, for example, once spontaneously cordoned off an entire street for a performance that had attracted a surprisingly large audience. This response is backed up by the group’s motto– “In principle cinema is possible anywhere.”

Patrick Wildermann is a freelance cultural journalist based in Berlin.