Every second year the „IDO“, International German Language Olympics, is held in Germany.  Many countries organise their own German Language Olympics to select the representatives to travelto Germany. For the first time in 2017 an international competition took place, but not in Germany, in Thailand. Almost 80 school students from 10 countries competed in the first Asia Pacific German language Olympics. Over seven days this international group from Japan, China, India, Vietnal, Malaysia, Indonesia, the Philippines, Thailand, Australia and New Zealand got to know each other, played together, studied together, produced newspaper displays, and competed with each other. Ten countries, one language. International encounters in German.

The idea of holding a German language competition in the middle of the Asia-Pacific region appeared a little incomprehensible when I first heard about the opportunity but as this all-expenses paid trip was a recognition of my students’ work previously in the German Goethe-Institut Language examinations, I grabbed the chance for Lucy Matehaere to travel to Bangkok and Rayong on the southern coast of Thailand for 10 days. The fact they needed an accompanying teacher to a nice warm climate to look after Lucy and the other six students from New Zealand also grabbed my attention.

The German Olympiad is normally held in Germany but this event was the first time it had been held in a different world region. Initially a little sceptical about how this would work in reality, I have been thoroughly convinced of the concept because of the evidence of the positive attitude and engagement for the German language from the students from the culturally and faith-diverse 10 countries participating over the ten days of activities and competition.

Ranging from A1 to A2 level (as a reference A1 to C2 is the notation for speaking and language ability from beginner to near-native speaker - The NZC states B1 as the level a Year 13 student should reach) the students were asked to write a Wall Newspaper which is a type of static image poster with fairly heavy amounts of text supported by resources which the member country pupils had brought with them. They also had to make a group presentation at their level. I saw a number of these and was always struck by the positive, supportive, enthusiastic and capable way the students went about their tasks. It is remarkable to see that students from all over New Zealand came to the task with a similar ability and approach.

For all those who doubt the New Zealand education system, think again. These students were positive, brave, logical and able to react to fluid situations with flexibility and stickability. This was particularly impressive considering that over half of the group were only 15 years old. Australia, New Zealand, Thailand, the Philippines, Vietnam, India, China, Indonesia, Malaysia and Japan each sent 7 students each to compete at the competition. Many of these countries have enormous numbers of students taking the Goethe examinations, so hearing about the thousands of students in Jakarta for the A1 examination was astounding.

Although English remains the language of world business communication, German is a strong contender in many parts of the world particularly in Western Europe and the East and also in all areas where German companies are manufacturing and trading and that’s quite a few in Asia. It was amazing to see students from New Zealand and India or Malaysia speaking to one another in German as their language of communication rather than English.

After the first days in Bangkok the students were put into accommodation with students from other countries when we travelled to the beach hotel in Rayong for the actual days of competition so more than a few cultural shocks were felt by all sides. New Zealanders really like a hotel pool as a rule and all of our group swam like fish whereas many other groups weren’t confident swimmers. Ball games also had some national characteristics and we managed to teach some students from other countries how to catch balls and throw frisbees when they didn’t know how, all the time while speaking German.

I also personally had a really pleasant conversation in German with a Chinese boy about his upcoming Gaokao final examination next year. He spoke no English, kept on telling me his German was poor (he is apparently the worst in the class according to him) but we communicated for 20 minutes about exams, stress and family pressures. I was deeply embarrassed when he and his classmates broke into spontaneous applause on the bus because I was able to say “Hello, My name is Mr Durrant and I’m a teacher in New Zealand” in my not-close-to A1 Mandarin Chinese. 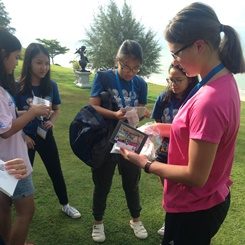 © Chris Durrant These students from diverse backgrounds, levels of teacher scrutiny and oversight, and language ability were an absolute advertisement for the ability of language to bridge cultural barriers. Lucy Matehaere took it upon herself to make friends with every one of the seventy other students at the event (Thailand as host was allowed to send 14 students) and when she didn't win the grand prize many of the other members of the event told her she had “won in their hearts”. Rose from Auckland, Emily, Rose and Josie from Wellington, Emily from Ashburton and Ben (the “rooster in the basket” as Germans would say) from Dunedin were fabulous ambassadors for themselves, their schools and their country and have all agreed to go to Lucy’s firmly-set goal event of following in the footsteps of Olympic Champion Lisa Carrington at the Olympic Games in Paris in 2024. We’ve decided a reunion there would be great and we’ll only be speaking German.

The final result was a silver and gold certificate in the A1 competition, 5 silver certificates in the A2 competition for New Zealand but a huge improvement in spoken language and a whole lot of contacts from all around our enormous region containing more than half the world’s population.

Asia Pacific German olympics
a film by the goethe-institut thailand