The Goethe-Institut in co-operation with the Physics Room in Christchurch offers this year’s German artist in residence Volker Strübing a scholarship to work and live in New Zealand. He will reside in Christchurch to engage and network with his New Zealand colleagues as well as seek inspiration for his projects and fostering intercultural dialogue.

Volker Strübing will be documenting his residency of two-and-a-half-months in a blog. 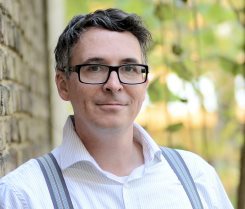 © Stefanie Fiebrig Volker Strübing was born in 1971 in Sondershausen, Thuringia, in the former GDR. He trained as a computer technician under the GDR system, then after reunification went back to school to obtain his Abitur university entrance qualification. After starting a number of university courses, and working in a succession of casual jobs, he began a career as an author and performer with the Berlin public readings collective Berliner Lesebühne. From 1999 to 2001 he worked in an advertising agency, but since 2002 he has lived as a freelance writer. He has written a science fiction novel, three collections of short stories, and numerous contributions to anthologies and newspapers. He also has a blog entitled Schnipselfriedhof (cemetery of bits and pieces) and travels around Germany, Switzerland, Austria and the Netherlands reading his short stories. He has been a winner at the international German-language slam poetry championships four times in all, in the team or individual category, including at the 2016 event in Stuttgart, with fellow team member Micha Ebeling.
In the years from 2008 to 2012, he wrote, directed and sometimes took roles in travel documentaries shot in the Arctic and the Middle East, and on the Mississippi, in homage to Mark Twain.
In 2013, to mark the 250th anniversary of the birth of the writer Jean-Paul, he was appointed as the first “city scribe” for the city of Bayreuth.
He writes, voices and draws the Kloss & Spinne (Clod and Spider) cartoon film series, which now runs to more than 30 titles (including specials), with more than 6 million views to its credit. 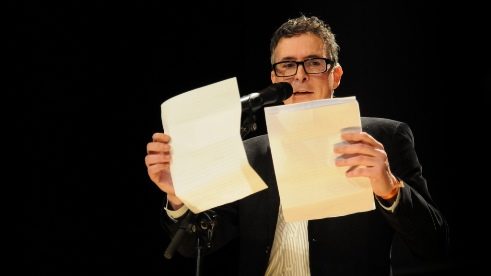 It all started with an idea of the film producer Lutz Neumann: what would happen if you took two Berlin coffeehouse literati out of their comfort zone and sent them off on a boat into the Arctic? So it was that in 2008, the writers Kirsten Fuchs and Volker Strübing headed north in a 30-metre former coastal surveillance vessel from Denmark to the Faroe Islands and Iceland, and on to Jan Mayen and Spitsbergen. The intrepid explorers shared all the joys and tribulations of the voyage with the viewers back home, interviewing whalers and climate researchers, swimming in the Arctic Ocean, and failing to sight a single polar bear.
Find out more about Nicht der Süden.

2010 was the 100th anniversary of the death of Mark Twain, so to mark the occasion the ZDF TV presenter Patricia Schäfer and Volker Strübing embarked on a journey through territory well-known to the great author – a 2000 km journey by raft up the Mississippi, through the Bible belt in the mid-west and into the heart of the American south. Along the way they found attitudes of hope and a sense of new beginnings on the one hand, and anger and last days on the other. They talked to gun merchants and striptease dancers, civil rights activists and vigilantes, motorcyclists and transsexuals.
Find out more about Mister & Missis.Sippi.

The ZDFKultur television channel contracted the Dominican nun Sister Jordana and TV presenter Rainer Mara Jilg to make a journey to Jerusalem, consisting of a road trip from Istanbul to Israel and Palestine that took them through the whole of Turkey and all of Lebanon. Along the way they interviewed members of many different faiths, trying to get some insight into the special challenges they were facing. While three short episodes of a TV series were hardly likely to resolve any of the big geopolitical questions, they did succeed in shedding a little fresh light on a variety of locations, cultures and conflicts, creating at least some sense of what is happening on the ground and above all getting to know a diverse group of inspiring individuals, united by their common desire for peace.
Strübing wrote the voice-over texts and scripts, and directed.

From February to June 2013, Volker Strübing held the position of the first “city scribe” of Bayreuth, to celebrate the 250th anniversary of the birth of the city’s famous son, the writer Jean-Paul. He duly created a blog featuring numerous literary and satirical miniatures, photos, newspaper columns, contributions to publications produced by the municipality, the Jean-Paul Society and the SpVgg Bayreuth football club. His main task, however, was to engage with the works of Jean-Paul, often regarded as difficult and old-fashioned, and to take on the challenge (hopefully successfully) to rediscover and re-interpret the great writer’s novels for the current generation. Stand-out occasions during these months included numerous encounters with Bayreuth artists and event organisers, and his participation (if only in a symbolic, “mascot”, capacity) in the establishment of the Kültürklüb e.V. cultural association.

Just a series of conversations in the local pub – or the lofty heights of speculative philosophy? When the ponderous pessimism of the beer-drinking Kloss (translating literally as “clod”) comes up against the vacuous sunny optimism of Spinne (“spider”), who is happier with a glass of lemonade in his hand, the sparks seem bound to fly. But fortunately, mine host Norbert is on hand to explain the meaning of life to the two disputants, true to the classic pattern of thesis, antithesis and synthesis.
Volker Strübing writes, voices and draws all the Kloss & Spinne films, which have now notched up more than 6 million views (still far too view, in our opinion). In autumn 2016 “Kloss & Spinne” was published as a book by Voland & Quist.
And now it seems that the trio are packing their bags for a trip to New Zealand...
Find out more about Kloss & Spinne.