KinoKonzert 2020
The Cabinet of Dr Caligari, 100 years on

A century ago, on February 26, 1920 at the now-closed Marmorhaus theatre on Kurfürstendamm in Berlin, The Cabinet of Dr Caligari first revealed its wonders to the world. It’s been leaving its mark on moviegoers and moviemakers ever since.

Unsettling in tone while at times dazzling and unnerving, The Cabinet of Dr Caligari stemmed from a country still struggling to overcome World War I, its immediate impact and its wide-ranging consequences. Caligari also unfurled its story within a genre that, while hardly absent from the screen, didn’t yet exist in a substantial cinematic manner. It’s little wonder that the 74-minute movie captured imaginations and sparked the German Expressionist movement. Just like their titular character, director Robert Wiene and screenwriters Carl Mayer and Hans Janowitz opened a door to something that could never be closed.

American film critic Roger Ebert called it the first true horror film, a claim that might seem overstated if it didn’t prove accurate. The role of horror cinema is to lay bare humanity’s anxieties, unpacking our deepest worries, interrogating our greatest fears, and exploring a world skewed by unease, agitation and angst. It’s where monsters roam - be they the critters hiding under our collective childhood beds, or the stress and concern lingering in our adult heads - and where viewers experience the consequences. Eschewing the realism prominent in cinema at the time is what Caligari perfected, so much so that every horror film since owes it a debt. 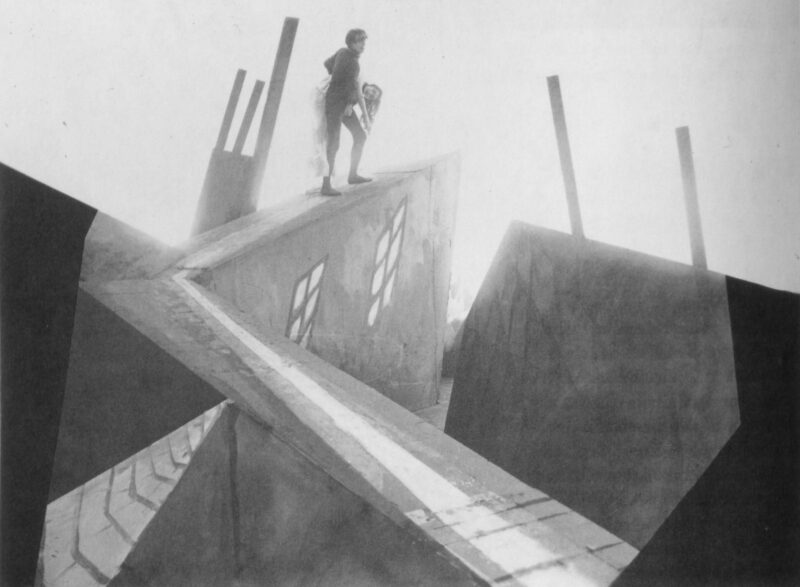 Janowitz had served as an officer in the war, while Mayer reportedly faked madness to avoid a military stint - and both experiences linger over the film. When an older man complains to Francis (Friedrich Fehér), Caligari’s narrator, that he’s been “driven from heart and home, from mother and child” - one of the first exchanges of dialogue via intertitles in the silent film - it’s easy to glean the parallels. But what Francis has lived through is far stranger, he tells his companion, and again the meaning is clear: war oozes unrest and unease for everyone.

Stepping into the movie’s tale within a tale, Francis proceeds to tell his friend just what’s behind his claims for greater strangeness. And so the film steps into the village of Holstenwall as well, complete with the locale’s literal, visible twists and turns - a sign that chaos is afoot. There, a newcomer named Dr Caligari (Werner Krauss) wishes to display an exhibit at the town fair. After receiving a permit from the rude town clerk, he unveils his grand attraction: a somnambulist called Cesare (Conrad Veidt). Francis and his friend (and romantic rival) Alan (Hans Heinz v. Twardowski) are among the audience gathered to witness Cesare’s skills, namely his ability to answer any question when awoken by Caligari. Alas, when Alan asks “how long will I live?”, Cesare replies “until dawn”.

The scene is set for Cesare’s prophecy to come true, which it swiftly does. Expectedly, suspicion for Alan’s murder settles on the sleepwalking fortune-teller, with Francis devotedly investigating his friend’s death - especially as more bodies pile up. Francis is just as interested in Caligari, however. As fear seeps through Holstenwall, the fact that the spate of murders began after Caligari and Cesare’s arrival cannot be ignored. Janowitz and Mayer relay a straightforward narrative, even with its storytelling twists and turns, but the film is at its best when it lurks in mania. Caligari and Cesare cause it with their arrival, the town happily succumbs to it when deaths start mounting, Francis pursues the case with feverish intensity and, when Caligari’s full tale is revealed, the simple use of text on screen - text screaming "I must become Caligari!" - proves suitably feverish and unhinged.

Although surprise revelations are littered throughout the film, the plot never quite takes the sharp, jagged, angular shifts in direction that its visuals favour – but it doesn’t need to. Expressionism is as much about mood and emotion as narrative and, as German Expressionist Cinema’s founding film, Caligari demonstrates that in every frame. The adage that a picture is worth a thousand words has rarely rung so true as in Wiene’s feature, which spins a strange and surreal web through eye-catching, offbeat imagery - and uses all of the above to ponder the impact of war, the influence of authority wielding absolute power as Caligari does over Cesare, and both the compliance and rebellion that springs as a result. 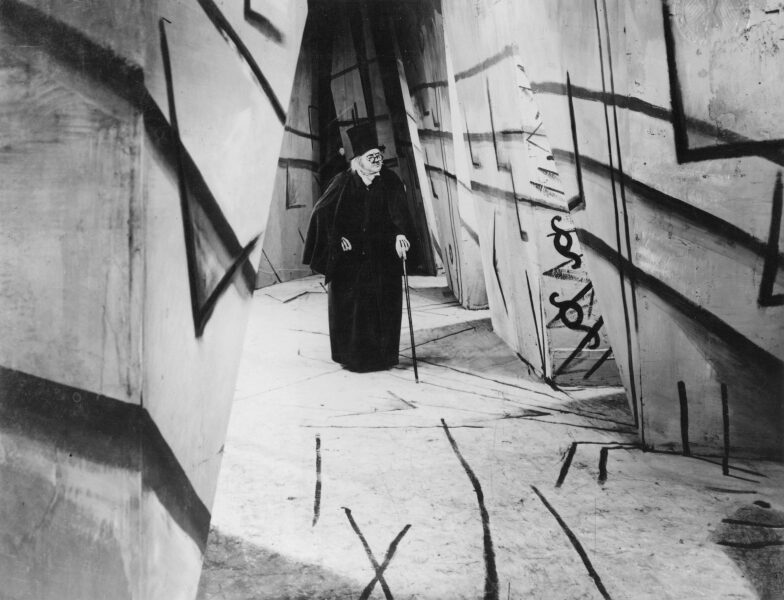 Today, every image from Caligari still appears as if it either belongs in an art gallery next to the work of Salvador Dali, or like it should’ve originally been carved in wood and block-printed to accompany a centuries-old fairytale. Of course, like all the best and most exceptional pieces of art, Caligari’s impact can also be measured through its influence. No cinemagoer is truly new to Caligari, even if they’ve never seen Wiene’s movie or know nothing of Janowitz and Mayer. For 100 years, it has cast a shadow over everything that followed. Groundbreaking musician and actor David Bowie reportedly counted it among his inspirations, and that’s just one entry on the list.

After Caligari, German Expressionism blossomed. The Golem followed the same year - a film that deserves to be held in the same regard and had the same influence on the movement - but Caligari’s fingerprints spread far. Without it, FW Murnau’s Nosferatu mightn’t have unfurled such a haunting unofficial version of Dracula, Fritz Lang’s Metropolis mightn’t have unleashed such stunning sights, and Lang’s M mightn’t have committed so firmly to its tone. But German filmmakers weren’t the only ones watching Caligari. Horror filmmakers everywhere were too, as was the studio that became synonymous with monster movies in the 1930s. Indeed, it’s impossible to watch Universal’s Frankenstein, Bride of Frankenstein, Dracula and The Mummy without thinking of Caligari’s Cesare. It’s also impossible to enjoy their inky frames, and their thematically loaded use of light and shadow, without recalling Caligari’s pioneering visuals.

That shadowy imagery proliferated in the next big genre of the era also: film noir. Caligari’s fondness for the abstract and expressive also found a home in Hollywood’s moody crime dramas and psychological thrillers, as did its entrenched feeling of suspicion and chaos. Another great influence on film noir, Orson Welles’ Citizen Kane, deploys many of the same visual techniques seen in Caligari, especially the use of chiaroscuro lighting, which uses dark and light to create a 3D-effect. Welles took inspiration from many sources, but the thread that connects Caligari and Citizen Kane is much shorter than it might seem purely from looking at the duo’s narratives.

Many acclaimed and applauded filmmakers clearly internalised Caligari, studied its style and approach, and worked it into their own creative style and output. Alfred Hitchcock falls into that category, as not only seen in his silent classic The Lodger - a film made a mere seven years after Caligari - but in his visuals throughout his career, as well as in his narratives for both Psycho and Spellbound. David Lynch’s style, too, belongs on the same continuum as Wiene’s masterpiece. Lynch’s work overflows with expressionism, surrealism and nightmarish touches, and his aesthetic has sprung from his own brain with a distinctiveness that’s all his own. However, when Eraserhead gazes at Jack Nance’s Henry, it’s with the same visual intensity evident in Wiene’s shots of Cesare. 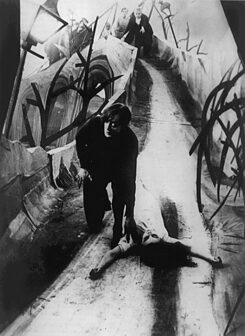 All unkempt black hair, pale skin and black clothing, Cesare’s influence on Tim Burton’s Edward Scissorhands is glaringly apparent. Gothic but playful, Burton’s overall style walks in Caligari’s shadow; note the angular animation and jutting surfaces that dominate his stop-motion collaboration with Henry Selick, The Nightmare Before Christmas. That film nods to German Expressionism generally, but its images and its fluid, almost dance-like character movements both scream Caligari. So do Beetlejuice’s and Batman Returns’, in fact.

More recently, as Caligari approached the century-mark, Australian horror film The Babadook picked up Wiene’s torch and ran with it. In her debut feature, Jennifer Kent focusses on grief - but, as she charts the efforts of a widowed mother (Essie Davis) to cope with her demanding young son (Noah Wiseman), as well the pop-up book villain that has manifested in their house, the film ponders an all-controlling power manipulating others. It helps that, in its look, the Babadook character could’ve easily burst out of Wiene’s frames and into Kent’s.

The list of works that owe a debt to Caligari is immense. The variety of ways that Wiene, Mayer and Janowitz’s feature changed film history, is just as lengthy. This German classic will likely continue to do so - its visual treats never fade, its painted-on shadows never regress and its eerie tale never loses its power, even a century on.

For its KinoKonzert 07 series the Goethe-Institut will screen a new, digitally restored version of the film, along with an original soundtrack composed and performed live by Ashley Hribar.