Premiering in the Berlinale competition before heading to the virtual edition of this year's Sydney Film Festival, Stephanie Chuat and Veronique Reymond’s film tells a familiar sickness-fuelled story, but Nina Hoss and Lars Eidinger — playing twins — are standouts.

For an 11-year period, Christian Petzold could barely make a movie without Nina Hoss. The acclaimed German actress starred in five of the director’s six films between 2003–14 and, from Wolfsburg and Yella to Barbara and Phoenix, each makes clear exactly why the inimitable star is so crucial. In fact, none would’ve been the same without her. Petzold can and has helmed excellent work with other talented leading ladies  — see: his two most recent releases, Transit and Undine, both starring Paula Beer — but his collaborations with Hoss would undeniably suffer from her absence. She has that spark, that presence, that mix of steeliness and vulnerability that’s both genuinely touching and mesmerising to watch, and she never turns in the same performance twice.

Written and directed by filmmaking team Stephanie Chuat and Veronique Reymond, My Little Sister also falls into the camp of movies improved by Hoss’ involvement. Actually, if she didn’t feature, it’s easy to see this predictable cancer-fuelled drama struggling considerably. The Berlinale-premiering film also boasts a memorable portrayal by Lars Eidinger, playing the leukaemia-stricken twin to Hoss’ caring sibling. But, with the movie more concerned with the woman endeavouring to face her brother’s ailing condition than the unwell patient himself — as its title announces — Hoss and her uncanny ability to convey familiar pain in a disarmingly affecting way aren’t just pivotal, but essential. 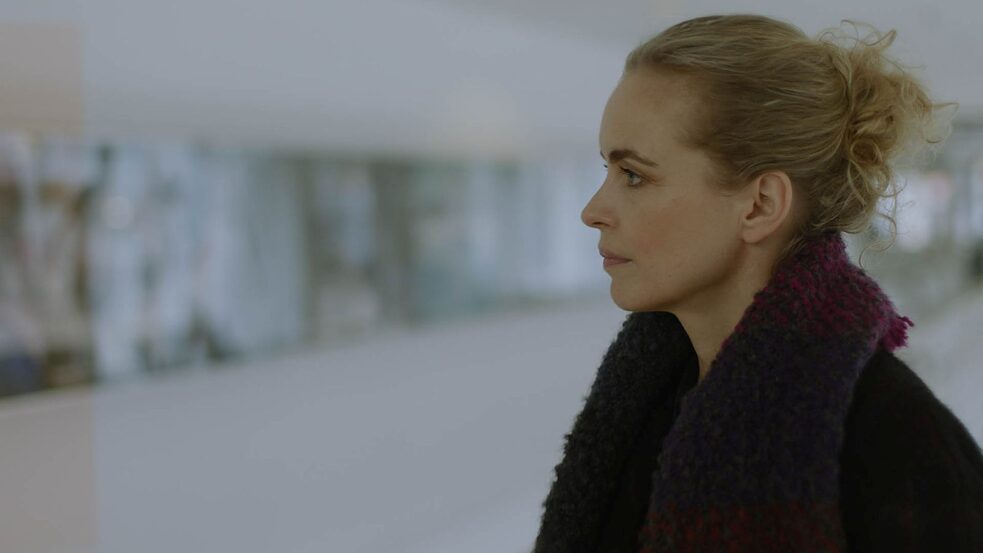 
Once a playwright in Berlin, now a wife and mother in Switzerland, Hoss’ Lisa is accustomed to standing in others’ shadows. With her children, she moved countries so that her husband (Jens Albinus) could take a lucrative job teaching at a well-heeled Leysin boarding school, abandoning her own career to do so. Before that life-altering change, she regularly penned theatre scripts for productions starring her actor brother Sven (Eidinger), with her elder sibling — by a mere two minutes — always the livelier of the two on-stage and off. And now that Sven is undergoing treatment for leukaemia, she’s dutifully by his side. After donating bone marrow for a transplant that the doctors hope will improve his condition, or at least give him the strength to keep fighting, that includes taking him to the Alps to try to coax him back to health.

As Lisa devotes her attention to Sven, her troubles elsewhere are also thrust into the spotlight: in her marriage, which is hardly a portrait of wedded bliss; with her mother (Marthe Keller), an actress less worried about her ill son than expected; and internally, as she grapples with the long list of choices and sacrifices she’s made for everyone else. As a result, while written and executed with sensitivity, My Little Sister swiftly joins the ranks of weep-inducing dramas that deploy the sickness of others to destabilise their protagonist’s life and augment their existing tussles. That’s a sizeable category, habitually using cancer as its weapon of choice and utilising the cancer-afflicted as fodder for heartbreak. This addition to the fold serves up few narrative surprises, even when it inserts Hansel and Gretel parallels into the story to explore its central twins’ journey out of their comfort zone; however Hoss and Eidinger’s efforts to cut to the emotional core of their characters’ respective plights are always welcome.


Occasional actresses themselves, Chuat and Reymond make their on-screen talent the focus, with cinematographer Filip Zumbrunn’s camera particularly — and expectedly — drawn to Hoss. It’s a move that ensures that My Little Sister feels intimate, as did their last feature, The Little Bedroom. And, it helps add depth to the film’s well-worn beats, as well as its recognisable dynamic. Foreseeing how Lisa will cope, or not, with Sven’s predicament isn’t difficult. Envisaging how Sven himself will react to his aggressive leukaemia is similarly straightforward. But Hoss and Eidinger are always worth watching, like the titans of German cinema that they are.

At no point does Eidinger play Sven as a cancer patient first and a person second; physically, the character’s transformation is plain to see as the film’s running time ticks by, but his personality, his desires and his dreams are always evident, too. He’s a man with leukaemia rather than a man defined by his leukaemia, which, through the force of Eidinger’s performance, remains true even when the screenplay doesn’t seem to share the same perspective. Hoss’ Lisa, too, exceeds her scripted boundaries. As much as Sven drives the drama in her life, she’s similarly tethered to her role as his sister and carer, but Hoss could never play a part that simplistic. There’s accuracy, of course, to Sven and Lisa’s situation and to the guises that cancer has forced them to inhabit. There’s more than a hint of easy cliché as well. To My Little Sister’s benefit, though, Chuat and Reymond have cast performers that transcend the film’s obvious and clear-cut tendencies, even when the movie itself doesn’t.