Netflix: Season 3
'Dark' serves up big-thinking thrills until the end

Netflix’s first German-language original series Dark has proven a huge hit since 2017 thanks to its time travel-fuelled narrative, compelling twists, philosophical underpinnings and emotional resonance. With the show now wrapping up its three-year run, Sarah Ward takes a look at its thrilling final season.

It blazes like a torch in a pitch-black cave. It glows brightly in defiance of the series’ moniker, too. Against tree-filled woodlands, a towering nuclear plant situated in the forest’s midst and the gloomy rural German homes that said energy station powers, it always catches the eye. Since Dark’s first season arrived in 2017, the show has offered up a humble yellow raincoat as its chief visual motif, with Winden teenager Jonas Kahnwald (Louis Hofmann) becoming instantly recognizable via his jacket. Accordingly, Dark without the standout piece of clothing wouldn’t be Dark; however, there’s no such thing as a straightforward status quo in this big-thinking, mind-bending series.

Dark has always pondered choices, cause and effect, and actions: whether the former truly exist, or we just think they do; and if the latter stem from freewill, chance or a preordained order to the universe. As created by Baran bo Odar and Jantje Friese, it has always contemplated the significance of even the tiniest of details as well, ruminating on how human nature causes us to clasp onto minutiae as we attempt to connect with each other. So, as the show brings its storyline to a conclusion, of course it continues to thrust Jonas’ jacket front and centre. The ordinary item provides a constant reminder of the night that Jonas and his friends went to investigate the caves under the power plant, aka the 2019 evening when Mikkel Nielsen (Daan Lennard Liebrenz), brother of Jonas’ crush Martha Nielsen (Lisa Vicari), went missing. As a result, it symbolises the time-travelling plot that’s central to the series. It also represents an everyday object laden with sentiment, and a token of Jonas former life — before he ventured to 1888, 1921, 1953–4, 1986–7 and 2052–3, as well as to an alternative reality in the years 2019 and 2052.

In Dark’s third season, however, Jonas’ jacket is not his own, with someone else slipping it on. As the series wraps up its three-year run with a final batch of eight episodes, it’s impossible not to be affected by the switch, but that’s part of the point. Appearing to Jonas as tragedy strikes, a different version of Martha saves him from the impending apocalypse by whisking him away to her parallel world, where he doesn’t otherwise exist and she sports the yellow coat. Narrative-wise, it’s a move that opens up the third season to even more twists and turns (because jumping between six different time periods — past, present and future — isn’t enough). Emotionally and thematically, it reinforces what Dark has been telling us all along with its blend of science-fiction, small-town drama and existential horror: that the only things in life that are certain are change and uncertainty, and that trying to hold onto anything is ultimately futile.

A glitch in the matrix

These characters’ lives change dramatically first in June 2019, when Michael commits suicide; then in November the same year, when Mikkel disappears back to 1986; and finally on June 27, 2020 — the same day Dark’s third season was released — when a power plant meltdown threatens the town. Navigating the specifics is best done by soaking in every shadowy frame and listening to every moment of Ben Frost’s purposefully ominous score (and by doing so from the beginning; Dark isn’t a series anyone can jump into partway and glean the finer details through context); however the overall thrust is easily explained by Jonas. From the beginning, he vocally ponders “a glitch in the matrix”. The phrase is uttered often in the show’s third season as well. Dark’s main players are perpetually unable to shake the feeling that their existence is troubled and flawed, no matter whether Jonas or Martha wears the yellow jacket. 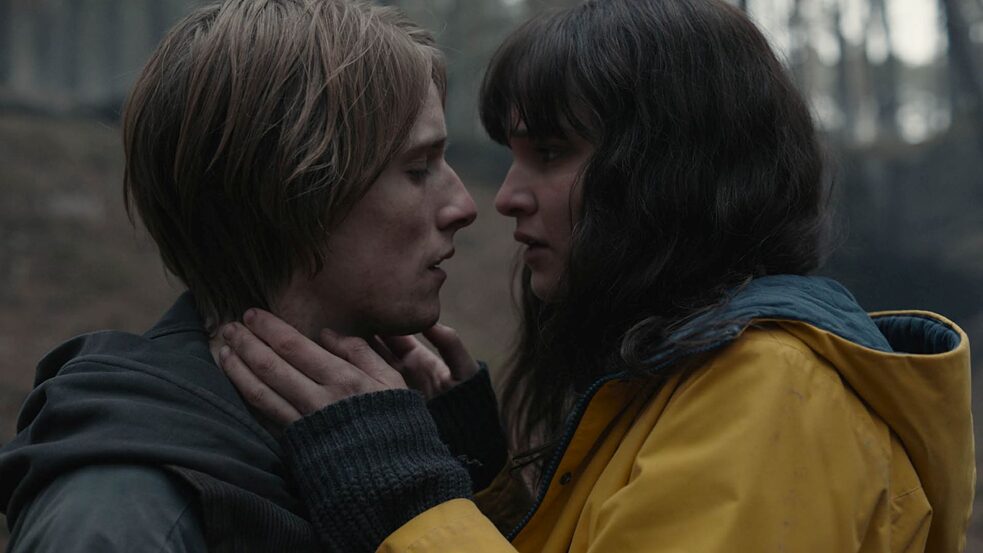 Jonas (Louis Hofmann) and Martha (Lisa Vicari) are once again in focus in Dark's Season 3 | © Netflix Where the series’ first season established and tested its characters and their ties, and the second deepened their challenges alongside their existential malaise and disquiet, the third unfurls their final hurdles. The aim, of course, is to bring their tales full circle — with cycles, loops and knots all crucial in Dark’s labyrinthine plot — and resolve the glitch, as well as explain exactly what’s been happening across the show’s 26 episodes, and why. Puzzles, riddles, enigmas and paradoxes are a key part of bo Odar and Friese’s vision, as is asking their dedicated audience to guess and sleuth along with each chapter. Listening to elderly adversaries Adam (Dietrich Hollinderbäumer) and Eva (Barbara Nüsse) muse and theorise as they attempt to return Winden to normality is now part of the equation as well. Posing questions that don’t necessarily have answers falls into the series’ remit, too — and while Dark’s third season offers closure, it also leans into the idea that much of human existence, behaviour and our fates remain mysterious, unknowable and unstable.

A drop in the ocean


If the phrase “a glitch in the matrix” is repeated almost to the point of winking overuse (stressing a point through repetition, be it of words, items, places, people, events, sounds or images, is also one of Dark’s trademarks), it’s not the only one. The show’s characters are also fond of stating that everything they know is a mere drop and everything they don’t is the ocean, as the third season also demonstrates. Harking back to clockmaker HG Tannhaus (Christian Steyer) — a pivotal figure linked to the four main families after taking in Charlotte when she was orphaned as a child — the phrase becomes as much of a motif as Jonas and then Martha’s yellow jacket, in fact. It’s a comment about vastness, but it’s also one about impermanence, because neither a single drop of water or the sprawling sea remains constant.

The quest, for Dark’s characters, is to navigate the here and now as it’s happening to them (and regardless of the time period they’re in), while recognising that their lives — like everyone’s — feed into a bigger picture. The quest, for the show’s viewers, is to follow the ins and outs of every moment of every episode while connecting the dots more broadly, both in a narrative and a thematic sense. For both groups, it’s a similar journey, which bo Odar and Friese haven’t cultivated by accident. In trying to ascertain what truly started the looping, time-jumping, reality-hopping chaos that’s enveloped Winden for nearly two centuries and in more than one dimension, both the series’ on-screen figures and its off-screen audience must weather wave after wave of minutiae, while piecing together a larger understanding of this sinuous, snaking story and its meaning.

In other words, even when it’s bringing its engaging and involving tale to a no-holds-barred, jam-packed and mind-bending end — and to a characteristically dense, layered but always satisfying one — Dark can’t stop focusing small while thinking big. In the process, it doesn’t cease serving up complex, twisty, exhilarating thrills, adding to and broadening its already maze-like plot, or increasing the number of characters (and versions of characters) in its frames. The all-encompassing darkness continues to beckon, as do the deep philosophical and existential underpinnings that go with it. Bo Odar and Friese constantly make that plain in every aesthetic flourish, with the show’s distinctive look and score holding firmly throughout. But this is and always has been a series that peers far and wide, appreciates how almost nothing that’s tangible ultimately matters, but also revels in the solace the little things can bring when bleakness and obscurity is so pervasive. Wanting to don your own yellow raincoat afterwards is understandable.