Boasting exceptional performances by Mišel Matičević and Sandra Hüller, this tense and perceptive feature screens at this year’s online-only Melbourne International Film Festival after wowing audiences at Sundance and the Berlinale.

Tense, terse and emblematic of a man certain that his next aggression-fuelled encounter is only ever seconds away, the look on Mišel Matičević’s face in Exile isn’t easily forgotten. It’s an expression worn by someone who has become so accustomed to the world treating them poorly that their defences are always up, and sported by a person so wearied to the grim reality of being seen differently that they no longer question whether it’ll happen. But, it’s also a look of determination and defiance. Unpleasantness might keep coming his way day in and day out, but Matičević’s character, Xhafer, isn’t just going to grin and bear it. He isn’t willing to simply accept his co-workers’ word when they claim that nothing is afoot, either, or obligingly listen to his wife Nora’s (Sandra Hüller) pragmatic assurances when she weighs in on his dilemma.

The sophomore feature by Kosovo-born filmmaker Visar Morina after 2014’s Babai, Exile thrusts Matičević’s flinty expression firmly into view throughout its entire 121-minute running time — as if, when confronted with a look so stoic yet still so coloured by struggle, the film just can’t avert its gaze. It doesn’t take long to understand why the writer/director has taken such an approach, with the movie’s protagonist quickly given much to explain his demeanour. The main catalyst is a dead rat, hanging from Xhafer’s home mailbox and awaiting his return from work one day. Xhafer is a pharmaceutical engineer, immersed in a field where rodents are part of the job; however his phobia of the scampering critters and his wish to have nothing to do with them are also on the company record. 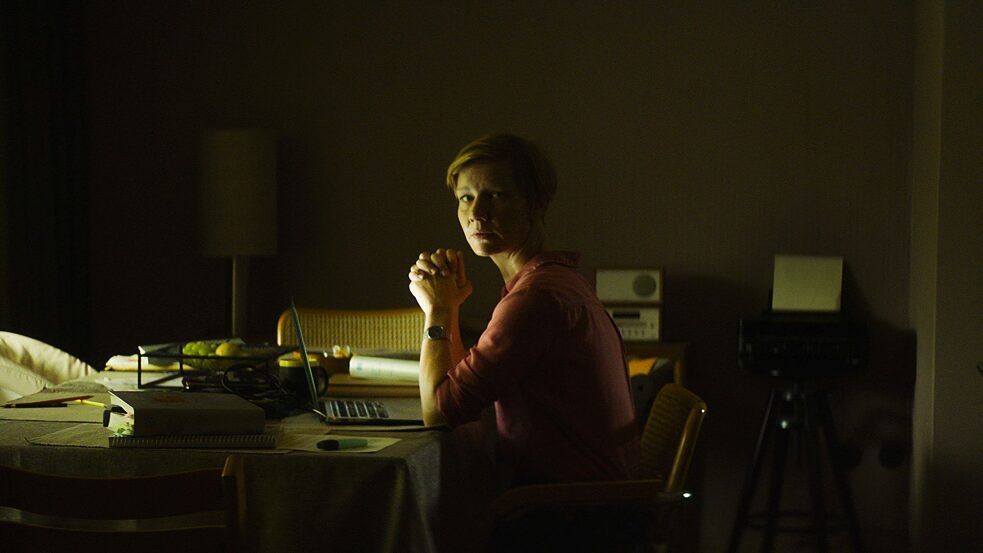 Sandra Hüller plays the role of Xhafer's wife in "Exile" | © Exile
Like Morina, Xhafer is also a Kosovo expat, a fact he has no doubt is related to the animal corpse left swinging at his house. He already feels as if he doesn’t fit in in the unidentified slice of German suburbia he calls home and, at work, his colleagues unthinkingly say that he’s Croatian, as if everyone from every other country is indistinguishable. His wife’s mother, too, has never withheld her displeasure about his place in the family, even as Xhafer and Nora’s own brood grows. So, while no one else seems particularly fussed about the furry carcass, Xhafer sees it as the latest slight directed his way — adding to a long list that includes being excluded from company email chains, the refusal of one co-worker (Rainer Bock) to provide the data he needs, his inability to ever earn time with his boss, and the pervasive disdainful attitude that appears to follow him through his employer’s stifling, warren-like corridors.


That Xhafer is the victim of everyday xenophobia isn’t a question to Morina, or to Exile. How far that prejudice goes, and whether the ingrained racism extends beyond microagressions to something much more sinister, is this thriller’s main query. Also lingering in every moment: if, after becoming not just habituated to the parade of small affronts but expectant that they’ll occur, Xhafer’s own paranoia, wounded masculinity and often toxic behaviour are factors in his current rat-infested circumstances. In fact, Nora tells him that perhaps he isn’t being treated poorly because of his nationality, but just because his colleagues simply don’t like him in general. It’s to the immense credit of Morina and his story editor Ulrich Köhler (director of Sleeping Sickness and In My Room) that Exile never undermines what Xhafer is feeling or queries the sensation of being an outsider, yet it also astutely examines a flipside that always isn’t considered: the ongoing toll of living in the shadow of persecution, especially upon one’s mindset, actions and sense of self.

Seen on the small screen lately in Dogs of Berlin and Babylon Berlin, Berlin Ensemble and the Deutsches Theater alum Matičević grapples with all of the above, proving exceptional as Exile’s focal point. While Morina’s choice to hew so close to Xhafer is pivotal to the film — with cinematographer Matteo Cocco (Roads) expertly deploying tight, claustrophobic shots to both watch and convey the character’s turmoil — Matičević’s ability to express internalised tumult with a stony face is just as crucial. His is a strong but never overdone performance, making the most of every tiny gesture and gaze, and his meticulously calibrated work stands out against the ever-reliable Hüller’s more naturalistic but still potent turn. Particularly worth relishing, though, are Matičević’s scenes with Better Call Saul and Freud’s Bock as Xhafer’s primary workplace foil. Their time together is deliberately uncomfortable and unnerving, and it cuts to the heart of Exile with precision.

The treatment of the country’s migrant population — be it bullying, harassment or oppression — is becoming a topic of increasing popularity and ongoing relevance in German cinema; however Exile never plays as a trend-driven piece. Rather, as it so perceptively ponders the equally alienated and insecure Xhafer’s plight, including the ripples his professional pains cause on the domestic front and the role played by office cleaner Hatiqe (Flonja Kodheli), this is a film of purposeful contemplation and interrogation. From its almost-absurdist comic character study moments to its descent into weighty psychological thrills (and spanning its jittery score, too), Exile rivetingly wades through a sea of menace of multiple levels. In a film that sits comfortably alongside the work of Michael Haneke, Yorgos Lanthimos and Ruben Ostlund, that we live in a world of societally accepted cruelty, and that it can drastically alter a person’s entire perspective and identity, is never banished from viewers’ minds.

Exile is screening at this year's online edtion of the Melbourne International Film Festival.