This striking debut feature won the Teddy Award for best queer film at this year’s Berlinale — and it’s now available to view in Australia as part of the 2020 online Melbourne International Film Festival.

It doesn’t take long for No Hard Feelings (German title: Futur Drei) to do something that, from its title, audiences can reasonably expect from the outset. Not every movie tasks a character with uttering its moniker in a line of dialogue; however with a name such as this one, it’s not hard to anticipate that Faraz Shariat’s feature debut will take the bait. The moment comes as the film’s protagonist, Parvis Joon (Benny Radjaipour), shares a post-coital cigarette with his latest Grindr date. The two men couldn’t appear more dissimilar — Parvis’ youthful sense of self-possession, his bleach-blonde locks and his Iranian appearance stand out against his middle-aged, firmly German one-night stand and the latter’s crisp, white, vinyl-filled apartment, for starters — and that sentiment is soon given voice. Noting Parvis’ heritage, his short-term paramour tells him, “I think that was my first time with someone like you; I’m not usually into ethnic guys”. “No hard feelings,” Parvis responds, “I’m not really into pretentious whiteys either”.

It’s a bold, assured and even arrogant retort spoken by someone who isn’t willing to be judged for who he is, even if he himself is still settling into his own skin as all young adults are. It’s also a powerful line in a movie that dials up that attitude in every frame, memorably and welcomely so. Born and raised in Germany to Iranian parents who fled their homeland during the 1979 revolution, open about his sexuality and largely comfortable in his Lower Saxony-based life, Parvis struts across the screen with a clear awareness of his own identity. He has his struggles, including a shoplifting charge that sees him sentenced to community service at a refugee shelter, but he’s less concerned with the world’s perception of him, and more interested in being himself and having fun. In exploring that mindset, the experiences that go with it and the challenges he faces when given a glimpse of someone else’s significant difficulties — via the friendship Parvis strikes up with Iranian asylum seeker Banafshe Arezu (Banafshe Hourmazdi), and the romance that springs with her brother Amon (Eidin Jalali) as well — No Hard Feelings surges forward not just with confidence, but with brazenness. While its main character knows that he doesn’t quite fit in in Germany for multiple reasons, this film isn’t willing to convey his ups and downs with anything other than a feverish glow. 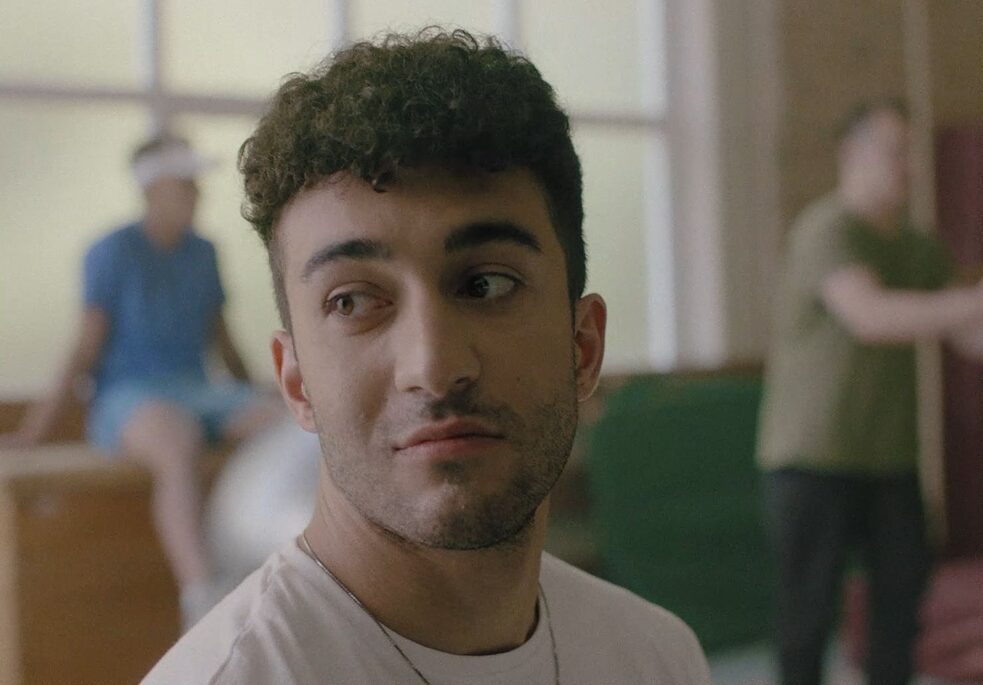 
This is Parvis’ life, the joys and troubles included, No Hard Feelings announces — not with those words, but with every frame. This isn’t just his life, though, no matter how exceptional Radjaipour (Die Verlorenen) proves at making audiences feel like they’re walking in Parvis’ shoes during this eventful summer. In a film that’s both intensely personal and widely relatable, it’s that and much more. Drawing upon his own experiences, Shariat crafts a semi-autobiographical portrait of coming of age while proudly standing out. Indeed, the movie’s very first piece of vision — a home video of a boy dressed up as manga character Sailor Moon and visibly loving it — is actually of the filmmaker himself. This footage recurs later, and Shariat’s own parents Shirin and Nasser also play Parvis’ kindly, accepting, doting mother and father, with the writer/director and his co-scribe Paulina Lorenz steadfastly dedicated to presenting a slice of reality that Shariat knows because he has mostly lived it.

Lit with neon hues, filled with exuberant party scenes, heavy on lens flare, bubbling along to an upbeat soundtrack and often shot to look like a music video — again capitalising upon Shariat’s own background, this time his directorial credits for the likes of Flight Facilities and Charles Murdoch — No Hard Feelings may shine brightly in a visual sense, but that doesn’t mean it doesn’t traverse tough terrain. In fact, the commitment to such an evocative aesthetic wholeheartedly fits and expresses the movie’s outgoing vibe; even when times are tough, no one is going to stop Parvis, Banafshe Arezu, Amon or this feature from being themselves. Amon in particular comes to that realisation slowly, however. When he first meets Parvis and a romantic connection twinges, only to be deepened during a raucous night out led by his sister, he’s hesitant, with the intolerant voices of the rest of the Iranian men at the shelter ringing in his ears. But, just as Parvis won’t stop letting the world know who he is, and just as Banafshe Arezu won’t accept that bureaucracy can shape her fate by deeming whether she can stay in Germany or not, Amon endeavours to find the fortitude to follow his heart.


The result, in addition to a deserving Teddy Award win at this year’s Berlinale, is an instantly and continually striking film that faces a plethora of complicated subjects head-on, with energy and vibrancy, and with the kind of delicacy and sensitivity that can only come from experience, too. This is a movie about being queer that finds space to grapple with both out-and-proud and closeted-and-conflicted perspectives, and within societally accepted and culturally admonished contexts as well.

It’s also a movie about being an immigrant that explores the minutiae of being born and growing up somewhere but always feeling foreign anyway, while also examining the stark slog of fleeing a difficult place for a brighter future and still being placed at someone else’s mercy. In other words, this is a film about people so often labelled outsiders, and about their wholly warranted refusal to accept that their sexuality, background or any other aspect of their personality or lives should make them outsiders. It’s also a love story, a coming-of-age tale and a fierce yet buoyant scream at the world from the cinematic void — and it’s as perceptive as it is potent.

No Hard Feelings is screening at this year's online edition of the Melbourne International Film Festival.