© The Trouble with Being Born

Following an android child, its two owners and the roles the robot is asked to fulfil, Sandra Wollner’s sophomore film is purposefully confrontational — and, after being programmed and then dropped by this year’s online Melbourne International Film Festival, the Austrian/German co-production now premieres in Australia.

Just like judging a book by its cover, forming a firm impression of a film from its opening moments isn’t recommended. But most movies don’t spend those first seconds and initial minutes so carefully establishing the type of experience that its audience is in for, unlike The Trouble with Being Born. A drama tinged with science fiction, the Austrian/German co-production begins with chaos. Images, seemingly of a forest, flit abruptly and joltingly across the screen. A noise, of the type you’d switch off quickly if it was emanating from a source nearby, commands the soundscape. Viewers don’t know what is happening or why, but they know they’re uncomfortable. And when the film finds a place to focus on, and a voice — a modernist house with a pool, and the reminiscing musings of what appears to be a pre-teen girl — that uneasy and unsettled feeling remains, as it’s meant to.

Even for those who first viewed The Trouble with Being Born at this year’s Berlinale, before a cloud of controversy started to swirl, there was never any doubt that writer/director Sandra Wollner begins her film as she means to go on. This is a movie that interprets humanity’s present to interrogate our possible future — as all sci-fi does — and it has tough, heartbreaking and unpleasant questions to ask about our increasing reliance upon technology. Accordingly, while often abstract in its visuals and oblique with its narrative specifics, it refuses to remain in easy territory. With exploitation its central concern, it can’t. Tonally, the movie never lets its audience relax, either. Wollner is unflinching, both in crafting a film that constantly keeps its viewers grappling with what they’re seeing, and in probing the many potential implications that could arise as our dependence upon machines to give meaning to our lives continues to grow. 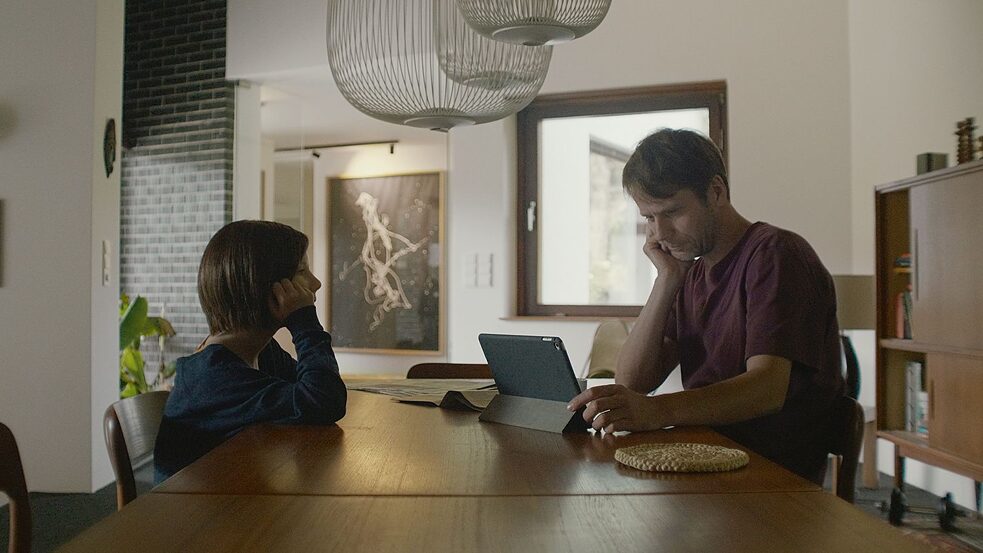 
The voice that solidifies in the film’s opening sequence belongs to ten-year-old Elli (Lena Watson, a pseudonym for a child actor who is also obscured via prosthetics to protect her identity). She appears to be living with her father (Dominik Warta) — until, shortly after they’re both introduced, Elli is found face down in the pool. Her papa isn’t worried, because he’s soon rebooting her with his phone and resuming their normal routine. There’s a clumsiness and discomfort to their interactions, though, which at first seems to mirror Elli’s own stiltedness. She talks of memories, but she recites details like they’ve been learned or implanted rather than experienced. As the film observes their time together, however, it’s quickly clear that Elli and her father’s relationship extends far beyond awkwardness.

After a sound draws her out into the woods, Elli wanders far from home, eventually crossing the path of a passing driver. In the lost android, he sees a gift for his lonely mother (Ingrid Burkhard) who bears a lifetime of regret over the death of her younger brother as a child — and he also sees a physical stand-in for her long-lost sibling as well. Now, Elli is called Emil. As flashes to the real-life, older Elli (Jana McKinnon) show, both Elli’s father and Emil’s sister deploy the robotic companion as a replacement. Alas, a different type of awkwardness remains ever-present in the machine’s new guise, as does the inability to forget her past programming or memories.


Making her second feature flm following 2016’s The Impossible Picture, Wollner tackles a subject that isn’t just familiar in sci-fi, but is one of the genre’s staples; androids, robots and artificial intelligence have all palled around with and preyed upon humanity in everything from 2001: A Space Odyssey and Westworld to Blade Runner, A.I. Artificial Intelligence and Ex Machina, to name just a few examples. But The Trouble with Being Born’s jarring introduction really does encapsulate the film, and its treatment of its topic, far better than any comparison to its genre compatriots. This is a feature with much to contemplate, including loss, memory, gender, identity, the emotions we imprint upon others and the roles we expect those around us to play, and it knows that none of the above is easy to ponder. It was always going to be a difficult movie — a feature that’s determined to challenge its audience — and it never shies away from that intention. 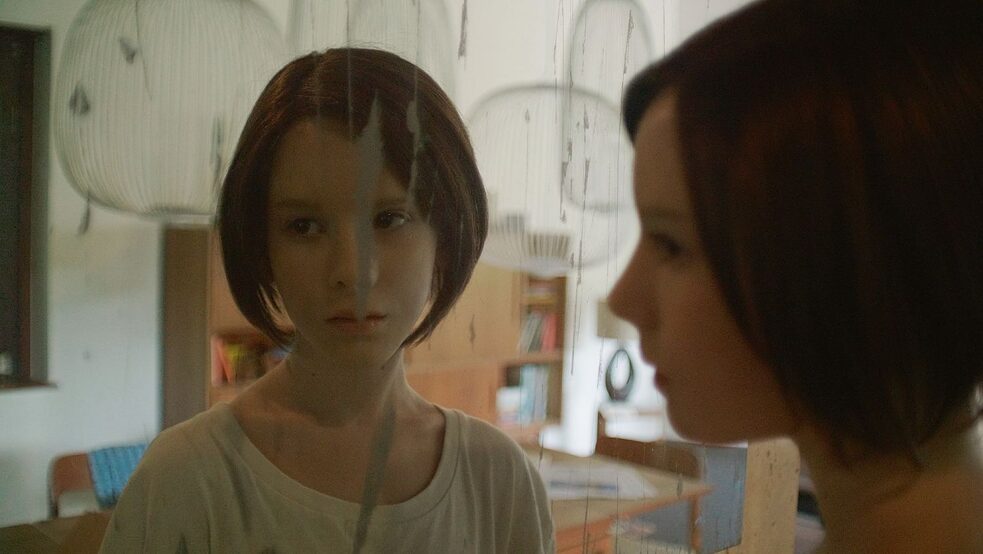 The film was dropped by Melbourne International Film Festival after negative media coverage | © The Trouble with Being Born If the film’s plot sounds somewhat slight and even repetitive, that’s because The Trouble with Being Born is far more concerned with its moral and ethical questions than narrative complications. As both Elli and Emil, the treatment endured by this child-sized android keeps inspiring complex trains of thought — whether being used as a realistic-looking stand-in for a daughter in the most troubling of circumstances, or being asked to soothe decades of grief in someone who barely realises that she isn’t interacting with the real thing. Via a script co-penned with Roderick Warich, Wollner keeps forcing those thorny ideas to the surface. With an almost forbiddingly icy air, which matches the movie’s glassy aesthetic, she perpetuates a chilly mood. In every choice from its initial moments, The Trouble with Being Born pushes its viewers to confront its challenges, all of which are thoroughly by design.

The Trouble with Being Born might be a rare case where forming an impression of a film from its first scenes proves apt and accurate, but Wollner’s feature has been judged for much else over the past eight months. Since its debut in Berlinale’s newly introduced competitive Encounters program — a strand specifically “designed to give more room to diverse narrative and documentary forms” — its narrative and themes have garnered increasing attention and backlash.

The film was selected for this year’s online Melbourne International Film Festival, then dropped from the event’s lineup after unfavourable newspaper coverage. It now reaches Australian screens as a last-minute addition to the Adelaide Film Festival, announced after the event started, and as part of Sydney’s Fantastic Film Festival Australia as well. And it should be seen; this is a bold film examining a multitude of tricky matters in provocative, boundary-pushing but always purposeful and probing ways, and the conversation it sparks is one of the most essential functions of cinema as an artform.

The Trouble with Being Born screens twice at the Adelaide Film Festival and in Sydney as part of Fantastic Film Festival Australia. All screenings are restricted to patrons 18 and over.