In the filmmaking debut of actor-turned-writer/director Lisa Charlotte Friedrich, contact between people has been outlawed for humanity’s safety. Live premiered before the world’s COVID-19 shutdowns, so it’s topical by accident rather than intention. However, now screening at the Sydney Science Fiction Festival’s German Sci-Fi Showcase, that doesn’t make it any less effective.

When the sight of empty streets is splashed across the big screen — or streaming, or on television, too — it’s rarely a positive sign. Zombies could be shuffling and munching their way across the globe. An unexpected illness might’ve decimated the population. Or, in the western genre, sinister villains may have driven everyone indoors in fear. Whichever applies, images of usually bustling spaces now devoid of people are used as a form of visual shorthand. Quickly, succinctly and in a manner that ensures everyone watching can instantly relate, they show that nothing is as it should be here. It’s this type of unease that Lisa Charlotte Friedrich aims to tap into with Live, the Tatort and Fritz Lang actor’s first feature as a writer and director. She does; however, she has also accidentally made a movie that’s perfect for the 21st century’s third decade.

Live premiered at Saarbrücken’s Filmfestival Max Ophüls Preis back in January 2020, well before COVID-19 shutdowns started in Germany, Australia and most of the world. While the coronavirus plays no role in the movie, this unintentionally prophetic film couldn’t better encapsulate the emptiness and absence that’s been part of everyday existence for the past year. Already, filmmakers have started seizing upon the current situation, with features about the pandemic bound to hit screens en masse in the future — and yet Friedrich leads the crowd purely by chance. There’s much for screen stories to explore regarding the present state of the planet, what its inhabitants have been through over the last 12 months and what follows from here, but Live already eerily and grippingly captures how it feels to be ripped away from normality to such an extent that leaving the house is fraught with tension, spending time with loved ones has become a rare occurrence, and enjoying anything communal comes packaged with stress and anxiety. 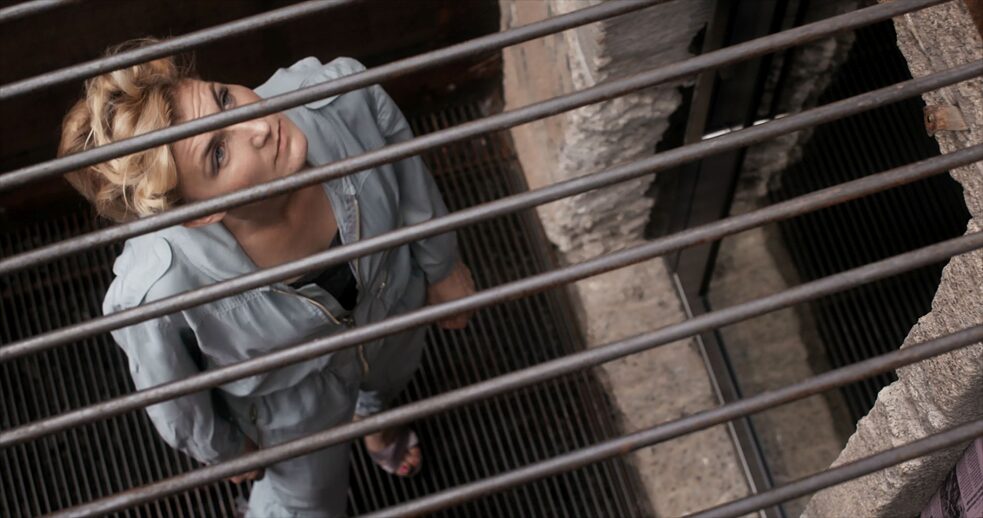 When the world stops


Set during a time of crisis, viewers see the impact of Live’s new world order before they receive much of an explanation about what’s going on. All public gatherings are verboten, sparking a big shift to online and virtual events, including for star trumpeter Aurel (Anton Spieker). It’s his sister Claire (Karoline Marie Reinke) who earns the bulk of the film’s focus, though.  A musician herself as a child, but always left standing in her more successful sibling’s shadow, she is now a psychologist who helps people deal with trauma. She doesn’t lack in work, with the ban on concerts, performances and leaving the house for non-essential purposes caused by constant terrorist attacks. Far too often, Claire is tasked with counselling survivors who’ve been left shell-shocked and shaking simply by meeting with other people, spending time in their company and experiencing the type of communal get-togethers that were once so commonplace that they were barely given a second thought.

At her latest job, Claire finds a ticket next to the man in need of her assistance. Although she already knows that covert events do still take place, spying that familiar scrap of paper inspires a plan. She has access to the requisite talent, with Aurel brimming with eagerness to perform for a physical audience again. So, after enlisting hackers Ada (Sonja Dengler) and Maximus (Corbinian Deller) to take care of the technical side — to keep everyone in attendance safe, and to evade the authorities as well — they set about staging a live concert. The mechanics play out like a thriller, with everyone on-screen constantly on edge, and the feature’s off-screen audience sharing their jittery mood. Baking not just worry but dread into the film’s shots of empty spaces and secret get-togethers alike, Friedrich also fills Live with a specific brand of agitation and apprehension, too, because even a short-lived dose of regular life can reignite long-simmering struggles.

An apt movie for right now


If the world hadn’t been blighted by COVID-19, Live’s concept would’ve still hit a few recognisable marks, with no shortage of dystopian films pondering how people react when their routines are drastically disrupted and destroyed. Still, Friedrich’s feature stands out by getting both grim and hopeful, and examining the yearning to connect alongside the tendency of even the most sought-after of interactions to unearth humanity’s worst nature. The idea that hell is other people isn’t new either, but the combination of Live’s premise, its balance of bleakness and longing, and its internalised performances all prove particularly resonant. Claire suddenly realises that she needs to reclaim what has been taken from her, and from everyone — and yet, in order to once again enjoy some of life’s simplest pleasures, she can’t overcome her nagging fears and thoughts, or avoid the actions they inspire.

Indeed, Live is a fitting movie for right now not because it strips the streets bare, scrubs away the hustle and bustle and wipes out everyone’s social calendars, but because it’s willing to admit that some things simply don’t change even in the most catastrophic of situations. It’s the filmic equivalent of seeing people revert to public rudeness after 2020’s lockdowns, or witnessing repeat incidents of toilet paper stockpiling, or finally being able to spend time with family only for all of the usual arguments to arise. Live’s penchant for narrative sparseness — for only telling viewers what it needs to — helps cultivate that timely, topical feeling. A memorable portrayal by Reinke that conveys as much through her nervous and unhappy posture as it does through the script’s dialogue is crucial, too. So is the way that the feature’s cinematography gives everything a familiar but also disorienting sheen, as everyone that’s been forced to withdraw from the world notices when they glimpse normalcy again — for better and for worse.

Live will be screening as part of a German Sci-Fi Showcase at the Sydney Science Fiction Film Festival on 27 February 2021. Tickets are available here.