Following a series of brazen thefts and a kidnapping, a resourceful and enterprising team of sleuths tries to find and stop the perpetrators. Such a tale, or something similar, has played out multiple times on-screen; however, in The Peppercorns and the Secret of the Deep Sea, the crafty detectives attempting to crack the case and save the day are children, rather than highly trained operatives or members of law enforcement.

This family-friendly mystery film does what many all-ages movies do, adopting the elements of a popular genre, then adapting them in a story suitable for younger audiences. The result: a feature that embraces rather than eschews convention, all in order to open up its premise to its child viewers. In a way, it feels like cinema in miniature — cinema that takes frequently deployed styles, storylines and tropes, then shrinks them down into accessible, kid-friendly packages. That sensation is shared among three of the highlights from 2021’s Kino for Kids lineup at the German Film Festival.

The Peppercorns and the Secret of the Deep Sea


On-screen tales about kids stepping into the adult world by solving mysteries aren’t new; rather, they’re part of a thriving family entertainment genre. Since 1999, German TV show The Peppercorns has taken the scenario and run with it — with The Peppercorns and the Secret of the Deep Sea following 2017’s The Peppercorns and the Curse of the Black King in bringing the franchise to the cinema. For adult viewers, the formula behind the narrative is inescapable, with returning director Christian Theede and writer Dirk Ahner happily abiding by the most obvious of templates. It works as it’s meant to, though, and as films and TV shows about sleuthing and spying children frequently do. At the core of the Spy Kids movie franchise, and everything from Inspector Gadget to Harriet the Spy as well, sits gleeful recognition that this particular genre is frequently outlandish and fantastical — and therefore fits perfectly within a kids’ make-believe world. 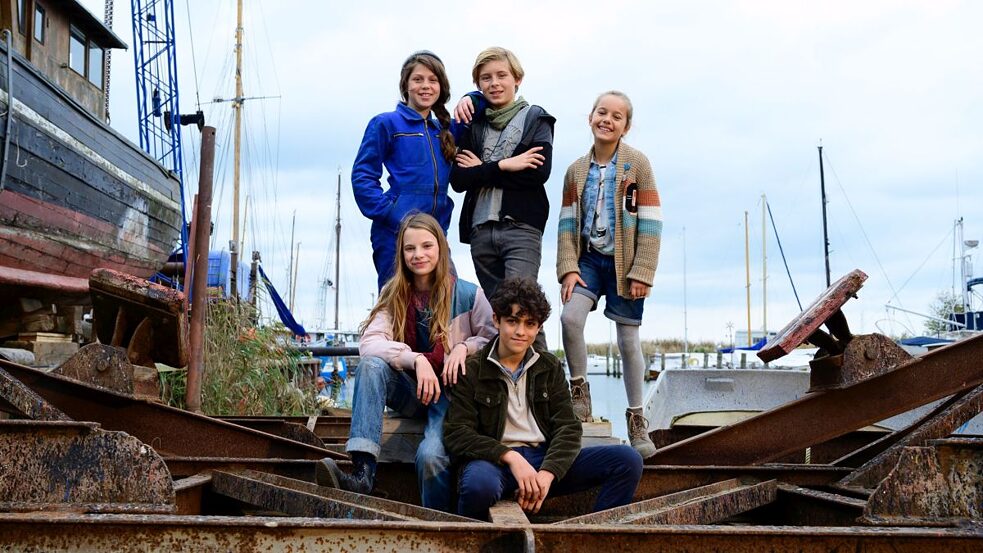 The Peppercorns return to the big screen in their second cinematic outing | © Wild Bunch_Marion von der Mehden Returning from the previous film, 12-year-old Alice (Emilia Flint) is holidaying in Ireland with her friend Tarun (Caspar Fischer-Ortmann) and his marine researcher mother Jaswinder (Myriam Abbas) when The Peppercorns and the Secret of the Deep Sea begins. But when the latter’s latest work is stolen, it sends the trio zipping back home to Hamburg, where further thefts follow. Despite Jaswinder’s cautions, Alice and Tarun are certain that this is a case for The Peppercorns, soon enlisting siblings Johnny (Leander Pütz) and Clarissa (Charlotte Martz) to help. Their commitment to finding the person responsible only deepens when more of Jaswinder’s research goes missing, as well as Jaswinder herself. Again, it’s easy to connect the narrative dots and spot the genre conventions, but this fast-paced family-friendly adventure happily leans into it all. And, when pilfering information from laptops and waiting for rushed data downloads becomes part of the story, it almost winkingly highlights how these overused tropes prove far less ridiculous when they play out in child- rather than adult-oriented scenarios.


Where The Peppercorns and the Secret of the Deep Sea shrinks the detective and espionage genres down to child-friendly size, Madison: A Fast Friendship tackles a different but equally oft-used premise. Here, an aspiring athlete chases a dream, but tussles with both personal and professional pressures, as well as learning to appreciate the importance of work-life balance. The sport in question: cycling. The eager devotee: the titular 13-year-old Madison (Felice Ahrens). Her father Timo (Florian Lukas) is a celebrated professional cycling star, and she has spent her whole life being trained to follow in his footsteps to an obsessive degree. But, when he obtains her a spot at the national academy — for a summer camp that doubles as a trial for a permanent place in the team — she struggles. After a training incident, her mother Catherine (Maxi Warwel) takes Madison to recuperate in the alps, where she forms a fast friendship with mountain bike enthusiast Vicky (Emilia Warenski). Although apprehensive at first, she also takes to her new pal’s penchant for downhill riding, a switch encouraged by her mum but frowned upon by her dad.

Whether charting ragtag underdog tales as seen in the recently resurrected The Mighty Ducks franchise, or chronicling one person’s quest for glory as Madison: A Fast Friendship does, films about sporting endeavours typically play by well-established rules. That’s firmly the case with this movie from writer/director Kim Strobl and co-writer Milan Dor, but it earns the audience’s investment in the same way that all notable sports-focused movies manage: by creating relatable and engaging characters. Young Ahrens and Warenski bring depth and charm to parts that could’ve just unfurled by the numbers, and sell the push-and-pull of youthful friendships — including the sudden and intense fashion in which they often spring, and the extreme emotions involved when they hit a few obstacles. Also a standout: the alpine setting in the Tyrol, and the lively cinematography that captures Madison, Vicky and their fellow mountain bikers as they zoom through intricate courses and over jumps. 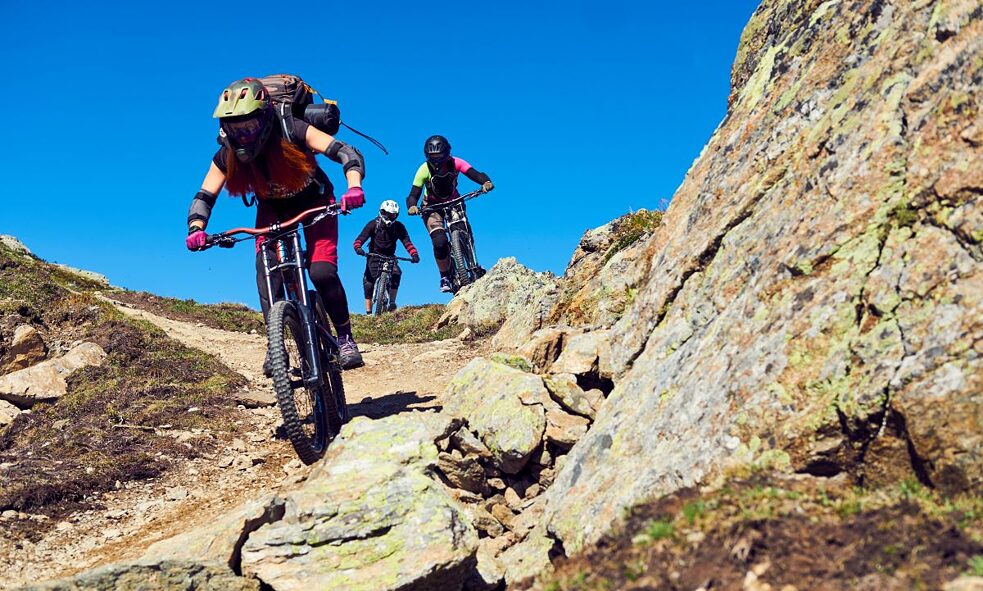 13-year-old Madison changes from one cycling pursuit to another in "Madison: A fast friendship" | © Madison, Credit: The Playmaker


Penned and directed by Ulrich Köhler and Henner Winkler, A Voluntary Year steps inside a difficult father-daughter relationship, as teenager Jette (Maj-Britt Klenke) prepares to head overseas for a year of volunteering in Costa Rica. She’s already apprehensive about leaving, given that she’ll be away from her boyfriend Mario (Thomas Schubert) for the whole time, but her single father Urs (Sebastian Rudolph) sports a particular brand of doting that complicates matters. Also their small town’s doctor, he heartily encourages the trip. Accordingly, in a subversion of most teenage situations, staying home would be an act of rebellion. Of course, by going, Jette would finally be out on her own. En route to the airport, she gets the chance she’s looking for when Urs stops at his brothers’ house, can’t locate him, starts worrying, breaks down his door with his trademark gusto and then has to sort out the aftermath. In his absence, Jette and Mario decide to take another path, then deal with their own fallout.

A drama about a teenage protagonist rather than a film specifically for teenagers, A Voluntary Year nonetheless follows the trend prevalent in this year’s Kino for Kids selections. Every German movie that examines this specific type of relationship will now earn comparisons to Toni Erdmann — and, while it unravels its story within a far more constrained situation, A Voluntary Year fits the mould. This feature about father-daughter struggles is unshakably aligned with the latter’s perspective, however. Jette desperately wants a life that’s her own, needs the chance to make her own choices and mistakes, and yearns to be her own person, with her gung-ho dad constantly in her way. Her journey isn’t about accepting her father and his place in her existence, but about getting him to appreciate that she’s no longer just a little girl in need of his supposed guidance and wisdom. Both Klenke and Schubert turn in textured performances, including the latter in the less sympathetic role. And, by hewing close to the village that their characters call home, Köhler and Winkler impart a sense of lived-in intimacy to their film that helps the narrative resonate.

Did we excite your interest? Catch all of the Kino for Kids films at the German Film Festival starting from May 25, 2021. Click here for a full list of screening times.