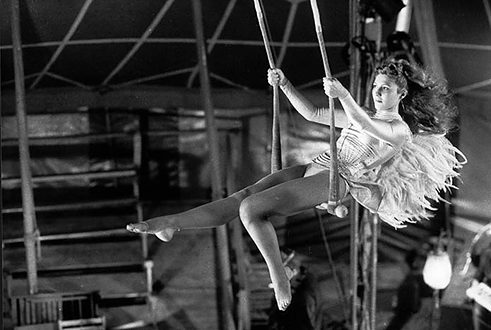 30 years after the release of Wim Wenders’ signature film 'Wings of Desire' the Closing Night of the 2018 German Film Festival celebrates with a showing of the newly restored version that world-premiered at the 2018 Berlinale. | © Wings of Desire

Turning loneliness into lyrical inner monologues, 'Wings of Desire' might be the most poetic film ever made. Each instance of hurt, longing and unhappiness becomes a tender cry in a city brimming with sorrow; indeed, the Berliner voices would echo like a chorus were they to ever release their thoughts both aloud and in tandem.

Wim Wenders pairs these soulful expressions, all uttered as hushed voiceover, with ethereal images that similarly find beauty in despair  — and similarly directs the feature’s visuals towards the troubled in an evocative manner. The movie peers down on the German capital with warmth, even as it spies Berlin’s post-World War II scars. It captures the daily hustle and bustle with empathy, even when it’s accompanied by visible scowls. It sees courage in failed dreams and delicacy in vibrant rock shows. It weaves through apartments and streets, wanders across bridges and floats over walls, taking in the struggle and the ruin, but also the underlying hope.

Whether or not Wings of Desire qualifies as the most poetic feature to grace the silver screen, it certainly earns that honour where Berlin is concerned. Though the city isn’t lacking in cinematic depictions, Wenders’ Cannes best director-winning film gets to the heart of its complicated magnetism, capturing a place that’s both entrancing in its complicated texture and haunted by its complex past. It’s little wonder that the movie’s guardian angels, the overcoat-wearing, ponytail-sporting Damiel (Bruno Ganz) and Cassiel (Otto Sander), watch over West and East Berlin with weary yet kindly eyes as they take stock of the location’s comings and goings in 1987. The duo have seen it all, tending to their task since before the city even existed — but, hearing the unspoken thoughts of its people and silently bringing them comfort in times of need, the pair of heavenly attendants are still drawn to a space where possibility and pain are intertwined in each pondering face and every war-damaged building.

With Rainer Maria Rilke’s poetry partially inspiring the story — and the film’s graceful lines written by novelist and playwright Peter Handke, then placed within a narrative scripted by Wenders with screenwriter Richard Reitinger — Wings of Desire specifically follows Damiel’s roamings throughout Berlin. Both alone and with Cassiel, he bears witness to individual hardship and to the city’s communal despair; however he’s also lured in by its spark, as well as by humanly sensations. In between gently laying his hands on the suicidal, listening to the worried, gazing down from Berlin icons such as the Berlin Victory Column and the Kaiser Wilhelm Memorial Church, and being spotted by children, three figures attract his particular interest. In elderly poet Homer (Curt Bois), he finds a man searching for all that’s been lost. In a film star (Columbo’s Peter Falk as himself), he finds curiosity and awareness. In trapeze artist Marion (Solveig Dommartin), he finds bittersweet melancholy about the human condition, and, eventually, love. 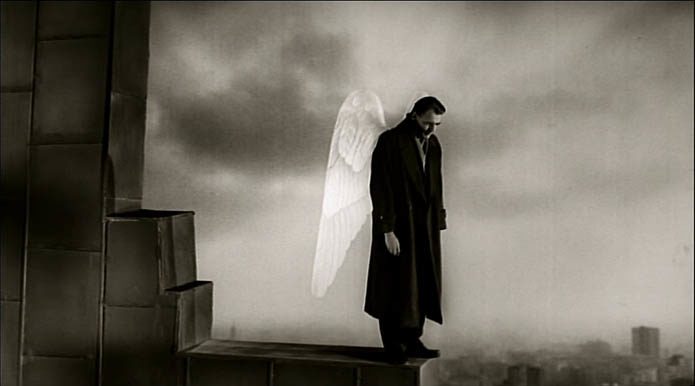 © Wings of Desire In fact, an overwhelmingly romantic notion sits within Damiel’s journey: the choice between eternity and the fleeting joy of sharing one’s time on earth with another. While his life as an angel is filled with the woes of others, he has none himself; he also has none of life’s sensual pleasures, be it affectionate touches, flavoursome tastes or vibrant hues. As such, the film presents his predicament less as a choice and more as a slow growing, gradually solidifying need — the need to experience rather than to simply observe. Wings of Desire’s poignant words paint a vivid and moving picture of human emotions, even at their bleakest, but it’s the feature’s imagery that best convey the feeling that Damiel seeks. Taking its cues from British fantasy-romance A Matter of Life and Death, the movie renders the angels’ existence and views in black and white, and their flesh-and-blood counterparts’ perspectives in colour.

To peruse Berlin in the monochrome of Henri Alekan’s cinematography is a striking sight, one that draws the eye to even the smallest of details (and even more so in its expressive flourishes, whether craning into the heavens to spy its sprawling nature or blurring the street-level view with frenetic urgency). To behold its glories and its flaws in shades of the rainbow isn’t just visually stunning, but emotionally as well. While it’s true that every snapshot of every city speaks to its past as much as its present, Wenders lets his frames resound with sumptuous depictions that — sometimes purposefully through the use of war-time images — chronicle this particular city’s changing face. Of course, watching the movie three decades after its release adds a further layer, with Berlin of 1987 bearing as many commonalities as differences to Berlin of now. Fittingly, the current restored version of Wings of Desire premiered at the Berlinale in February. This process of recognising transition and transformation isn’t just an aesthetic flourish; while the evolving look of the city is baked into every shot, it also mirrors the evolution undertaken by the feature’s protagonist, and by humanity in general.

Accordingly, much of Wings of Desire’s poetry stems from its ability to not only depict, but to ruminate. The film offers a meditative, reflective musing on Berlin, its residents and even all of mankind as an elaborate mass of intense highs and crushing lows — and, an assessment that the former is worth enduring the latter.  Falk, name-checked as Columbo, often improvising and given the most overtly humorously role, is gifted a line that couldn’t encapsulate the feature’s viewpoint better: describing simple, brief, minute pleasures, he explains, “to smoke, and have coffee — and if you do it together, it’s fantastic.” Ganz and Dommartin especially make the movie’s perception plain in their nuanced performances, conveying the bliss of small moments as well as the deep-seeded pain that burrows beneath everyone’s skin. And in two visceral standout sequences set against live gigs by Australian bands Crime & the City Solution and Nick Cave and the Bad Seeds, they offer portrayals that intimately capture love, longing, yearning, hurt, sadness and a plethora of other emotions in between, demonstrating the film’s poetry in its most primal form.