Berlinale & Antenna
There is no recipe

Wieland Speck is the head of the Panorama program of Berlinale. He has lived in Berlin since 1972 and moderated the Geniale Dilletanten festival in 1981. Openly gay and never shy of addressing queer issues in his art, Wieland Speck has been involved in countless films dealing with matters surrounding men’s emancipation and homosexuality.

The Antenna Festival sticks out among the many other Sydney film festivals, and it has been supported by the Goethe-Institut since its beginnings. What is it that makes Antenna an event that you consider travelling half way around the world for?

When we decided to bring documentaries to the foreground in our Berlinale Panorama program it was the early 1990s: cinematically and business-wise interest in them was low. But concerning content we found the films were often more exciting than fiction. With lesser means but ultimately high motivation these filmmakers dealt with burning issues like AIDS, the environment, emancipation on all fronts, racism and of course the fall of the Berlin wall and its aftermath. So we opened a new sub-section called Dokumente in order to attract attention and to provide space for various forms of non-fiction.

We set the premiere to 5pm every day — between the film market’s day business and the fiction dominated evening program. That led to great successes over the years; cinemas took over the pattern and introduced this new slot to their audiences — and today a third of Panorama is documentaries, half of them showing in prime time slots. When I heard of Antenna and saw the program I knew: that’s a good thing. We need to make documentaries more cinematic and television more daring. Not to mention to tackle the phalanx of conventionality in the internet. Who else if not a festival with filmmakers and audience present can lead the way!

As a young man you acted in Marlene Dietrich’s last film, Schöner Gigolo, armer Gigolo. In later years you are mostly credited as a director, scriptwriter, editor, producer or festival curator. Are you tempted to go back in front of the camera?

The question makes me smile — that 'incident' was the high point of my acting career even though I was a mere ‘noble extra’ in that lousy movie — but next to David Bowie whom I still adore and, yes, opposite the most fabulous German lady ever! Well, I acted once in a while again, for films and filmmakers I believed in, but it’s not really my main goal anymore. In the 1970s I thought I would become an actor, but it turned out that I had too much to say myself in those intense times — so I moved behind the camera. 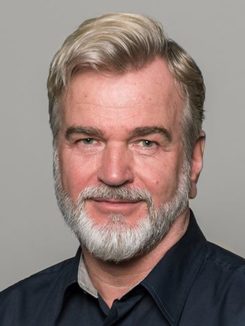 Wieland Speck | © Wieland Speck As part of your work for the Berlinale and as a jury member for other film festivals you often come across young, aspiring or emerging film makers. Are there lessons learned in Geniale Dilletanten times that you would formulate into advice for aspiring
or emerging artists?

Absolutely! In those times, there were hardly any role models because everything existing felt so yesteryear. So whatever ‘we’ did there was no comparison, the moment of astonishment was working for us. You can imagine the amount of freedom available in a setting like this — for those who did not shit their pants… so I would advise:

First, there is no recipe. Second, if you don’t know what it is all about, no one will tell you: do your own maths. And third, learn to trust yourself by being as truthful as possible. The rest is talent, effort and luck.

In this issue of kultur magazine, we are talking to a number of Geniale Dilletanten participants, all of which have moved on to lead unusual and creative lives. Are you still in touch with other artists from those days?

Oh yes. Especially the gay underground of the late 1960s, the decade leading up to punk, was, despite being a small fraternity, very diverse, and very influential to the zeitgeist. My age group experienced one imprint phase after the other — if you were unconventional enough to let that happen of course. That led to rather deep relationships between players — and the exodus that AIDS marked was extremely painful. But those who survived plus the many great heteros remained friends, colleagues, or at least sort of benchmarks until today.

From Blixa Bargeld and Wolfgang Müller to Bettina Köster, legendary singer/writer of the bands Mania D and Malaria!. I just heard she will soon perform in Berlin again, and I wouldn’t miss it for the world.

You don't get away with laxness

Every year, movie lovers and film industry heavyweights travel to the Berlinale. Thanks to its name, it is per definition a Berlin-based festival. Could the same festival happen in another European city?

Well, I don’t think so. Berlin has this uniqueness on top of and in contradiction to any other unique metropole. The money of the country is not based here — it moved to Frankfurt during the Cold War, and never returned. And Germany is a federal republic, thus featuring many 'capitals', including for culture and politics. That gives Berlin far more flexibility than your regular centralised capital where everything has to happen to the max, marginalising initiatives or talents on the way to 'victory'.

In addition, the political past of Berlin has sharpened an ethical attitude that demands clear positioning: for example, without being just politically correct you don’t get away with laxness when it comes to human rights of any sort. The festival audience wants something to chew on, politically, aesthetically, with innovation, low in convention, low in cliché — something helpful on the way to a less annoying world than the one we have to experience on a daily basis… and that has formed the expectations including those of the film industry representatives that are attending. The all-dominant term is ALTERNATIVE. Doesn’t that sound promising?