“Au fil de l'eau” (roughly: As the water flows) is a work commissioned for a social housing project by Montreal street art organization MU and highlights the key role that water plays for the city. 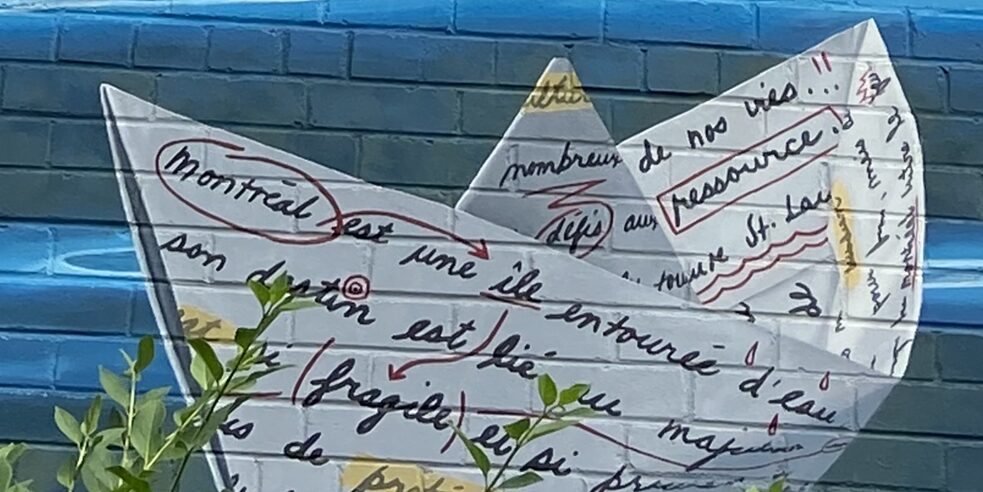 Closeup: "Au fil de l'eau" by Phillip Adams | © Phillip Adams commissioned by MU. Photo: Klotz Klawitter (Pseudonym) The Habitations Jeanne-Mance project is situated at the heart of downtown Montreal, one of the city’s prime real estate sites. It is the oldest project of its kind in Canada and with 788 residential units provides a home for around 1,700 people from 70 countries, many of them recently arrived refugees. Many walls of the project’s houses have been used for works commissioned by the city and its street art organizations, addressing issues that are important to the residents and to the city.

Au fil de l'eau is of course all about the element that is water, which has always played a key role for Montreal, an island city situated in the St. Laurent river. This comes as no great surprise in Canada, which has over nine percent of the Earth’s fresh water supplies and whose landscape is characterized by over two million lakes. In Quebec at least, the provision of water is covered by basic tax, meaning that it essentially costs nothing to use water. In addition, water is used to generate energy and makes an important contribution to ensuring that the country does not depend on imported energy. Nonetheless, a supply of clean and fresh drinking water is not yet guaranteed throughout the country. In many rural regions and in the communities of the indigenous population, the only supply of water comes from natural waterways and wells, which is not advisable given that contamination of the groundwater is also a problem in Canada. There is still a lot that needs to be done.