In 2018 the whole world was looking at Mexico. Both the Colonia Roma district of the capital and the province of Oaxaca received unprecedented media interest. The reason: the film Roma, a semi-autobiographical work in which Mexican director Alfonso Cuarón pays tribute to his hometown, the decisive events of his childhood and the women of his life - his mother and his nanny.

In Roma, the character Cleo is played by Yalitza Aparicio, an educator from the state of Oaxaca whom Cuarón chose because of her resemblance to his nanny. Both the film and its lead actress were the subject of lively 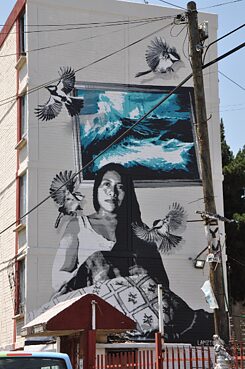 A complete view of the work, located at Unidad Habitacional Morelos II, Colonia Las Peñas, Iztapalapa. | © Lapiztola debate, due to the uncomfortable fact that the mostly indigenous inhabitants of Oaxaca, at least in the 1970s when the film was set, were often treated like second-class citizens. The matter-of-fact way in which nanny Cleo accepts her position as a servant and the restrictions on freedom and humiliation that go with it speaks volumes about the inequalities inherent in Mexican society.

However, the film broke records for Oscar nominations. It was the first Spanish language film production to compete in ten categories, including "Best Actress" and "Best Film". All this despite the film having not even been shown in cinemas.

Referencing a scene in which Cleo is in a hotel room with her boyfriend Fermín, who is doing his martial arts exercises to impress Cleo, the Oaxacan collective Lapiztola created a mural in the Morelos II housing estate in the Iztapalapa district. The colorless image corresponding to the black and white film is enriched by a colorful picture of roaring waves in the sea.

The tension created by the contrast between the calm and contented looking chambermaid in black and white, the bright blue churning waves and the wild and free birds gives the wall painting a strong poetic intensity.

The Lapiztola collective was founded in Oaxaca in 2006 by Yankel Barderas, Rosario Martínez and Roberto Vega. It was born from the problems of the state, from violence to drug trafficking: In protest against the rampant violence in the province of Oaxaca, the architect and designers decided to make their art public.

Lapiztola is a pun from the pen (lapiz) and the gun that shoots the paint onto the large walls. A central theme of the collective is the ongoing mass abduction of children and women, one of the main problems of the province. Most of the victims are never found again, they simply disappear.
In 2016, on the occasion of its tenth anniversary, the collective was invited to present a retrospective on the walls of the Institute of Graphic Arts of Oaxaca (IAGO).