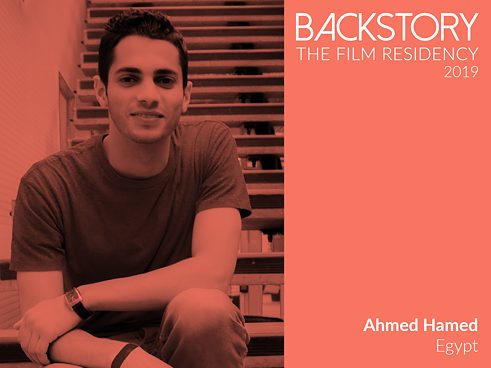 Ahmed Hamed is an Egyptian filmmaker and producer.
He gained a BA in Acting & Directing from Helwan University in Egypt. After his studies, he achieved a cinematography course at the Institute of Cinema in Egypt.  He achieved a course in documentary film directing at Stockholm Academy of Dramatic Arts in Sweden just before his internship with the FID Festival International De Cinema Marseille, France. He received six awards and his films have been shown at film festivals all over the world. Recently involving a screening at the BBC Arabic Festival in London 2018 and on the BBC Arabic channel 2018. Furthermore, his works have been shown at the launch of Sharjah Film Platform 2019, And ALFILM -  Arab Film Festival Berlin 2019. His debut Doc short film is “Necessity Has No law” (2017) and his second short film is “Faces Burn” (2019).

Ahmed Hamed tells a story about three Syrian refugees that he met in Berlin and followed over a couple of weeks in June 2017. These young men ( all 19/20 years old ) had fled Syria and found their way to Germany. Through a WhatsApp group, they bought tickets for what they thought would be a simple weekend trip to Paris, 20 euros all inclusive - transport, accommodation, food and a visit to the Eiffel tower. The tickets came through a very aggressive and protected individual that did not agree to be filmed. When they arrived in Paris, they found themselves in a conference call on the outskirts of the city. Along with thousands of other people including children of Arab origin, also some nationals of Slovakia and Poland, they were locked inside a boiling hot conference room with no water or food and security guards everywhere, and asked to wave the Iranian flag at what turned out to be a “Free Iran”.