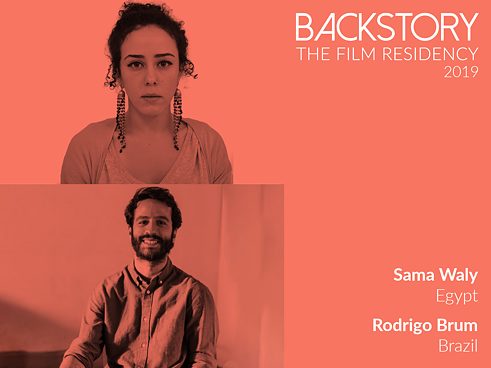 Sama Waly lives and works in Cairo. She received her MFA in Film, Video, New Media and Animation from the School of the Art Institute of Chicago. She is currently directing a short film “Sorry, No Soy Fidel”, as well as her ongoing project, “She wrote, and even skies and mountains too die alone”. Her first feature-length documentary “My Father Looks Like Hassan Fathy” received the Graham Foundation grant (2019) for development and presentation. Since 2011, she has exhibited and published her work in Cairo, Chicago, and internationally. Since 2018, Sama has been training full-time, in several styles of Kung Fu Martial Arts.

Rodrigo Brum (*1987) is a Brazilian filmmaker, currently based in Cairo. He holds an MA in Philosophy at the Federal University of Rio de Janeiro (UFRJ) and an MFA in Film, Video, New Media and Animation at the School of the Art Institute of Chicago (SAIC). He recently directed his first feature documentary, “Like Someone Who Hears a Very Sad Song” (in post-production), shot in the Cape Verdean archipelago, where he lived for almost a year. In Cairo, he works on his second feature-length, “My Father Looks Like Hassan Fathy”, and is part of the team of Ambient Light, a production company based in Egypt, where he produces the feature documentary “Za’atari Captains” (in post-production), directed by Ali Elarabi, and the documentary “Warda: l’algérienne" (in development), directed by Souheila Battou. His work has been supported by several grants and fellowships, including a MacDowell Fellowship (2017), and more recently the Graham Foundation Grant (2019), among many others. Rodrigo has taught philosophy and filmmaking in institutions in Brazil, United States, Cape Verde, and Egypt, where he worked as a visiting fellow at the Cairo Institute for Liberal Arts and Sciences (CILAS).

Two filmmakers investigate events that led Egyptian state authorities to demolish the old village of Gourna, built sometime between the sixteenth and eighteenth century on the western bank of the Nile, across from the city of Luxor, above the ancient city of Thebes. Seven thousand Gournese have been relocated to a public housing project, accused of having built their homes atop the ancient tombs on the Theban Necropolis, and subsequently making tomb-raiding an age-old tradition. It has taken the government over a century to free the land for archeological research. An earlier effort to do so, following a scandalous theft of an entire rock carving in 1945, led the Department of Antiquities to commission Hassan Fathy—who would later become Egypt’s most famous architect—to build a model village, to lure the villagers into new modern homes. Fathy is famous as a pioneer in sustainable building and developed a philosophy of “appropriate technology” to resolve the housing crisis in Upper Egypt. The houses were modern, however antimodernist, an ode to traditional building coupled with modern technology. A few months into building, Fathy’s new village flooded and the project halted. The villagers for whom Fathy dreamt to build a better life refused to move and his utopian village remains incomplete to this day. Today, seventy years later, the architect Tarek Waly, a former disciple of Hassan Fathy, dreams of rehabilitating Fathy’s village. Amidst the violent political turmoil in Egypt, the film follows Tarek from Cairo to Luxor as he views vernacular architectural heritage in terms of its poignant deterioration. From the archives of Waly and Fathy, the film reconstructs a disjunct memory of vernacular building traditions gradually disappearing within a craze for an industry of cement and burnt brick in a modernizing nation-state. Faced with the reality of Egypt’s current political and economic challenges the film highlights Waly’s concern if, like Fathy, he too will fail to see his dream materialize?