David Bowie and German Pop Music
Hero for a Day 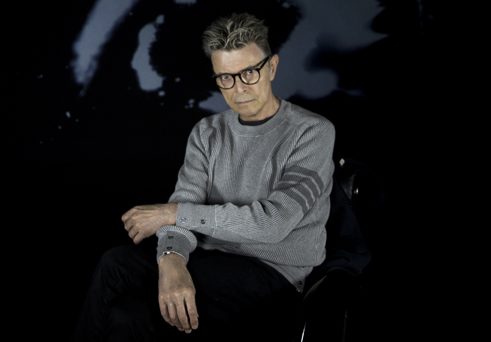 Berlin was a divided and encircled city, a sociotope in a special political situation. For just under two years, beginning in 1976, it was for David Bowie a retreat and an inspiration. This was enough to give a formative impulse to then still young and indecisive German Pop music.

California disagreed with David Bowie. After the production in Los Angeles of his album Station To Station, which was released in early 1976, he seemed burned out, and the copious consumption of cocaine did the rest. Not only the British writer Barry Hoskins, in his famous chronicle of the WEST Coast Pop scene, Waiting for The Sun, reported of the collapse and death wish of the young, eccentric Londoner who, after success in the Old World, had tried his luck in America. After the 1976 world tour, baptized Isolar, came to its difficult end, Bowie found shelter, via European stopovers with the Tangerine-Dream mastermind Edgar Froese, in Berlin-Schöneberg. It was a move during a cold drug withdrawal and a radical change of artistic scenario. From the bright sun of Hollywood to the Cold War.

It was no accident that the Pop avant-gardist Bowie docked in a guest room of the progressive electronic musician Froese. Apart from early Kraftwerk, Can and some krautrockers, German Pop music of the seventies didn’t have many compelling alternatives to offer a world star like Bowie. Walled-in Berlin meant for him, who was finally to live in the Schöneberg Hauptstraße until 1978, a retreat into the anonymity of the local underground. When his former Los Angeles buddy Iggy Pop, with whom he had collaborated several times in the studio, followed him to Berlin, a small, creative cell grew up. Schöneberg as the epicentre of glam Raw Power and avant-garde.

At the beginning, Bowie’s time in Berlin was for him a come-down into the haze of brown coal that wafted over from East Germany. A pause in art galleries, before the paintings of the Weimar Republic, at the travesty salon of Romy Haag, and finally a musical impetus with the three major albums mainly recorded at the Hansa Studios (at attractive costs subsidized by the city of Berlin): Low, Heroes and Lodger, with a view of the East German guard troops on the spooky, divided Potsdamer Platz. Bowie had avidly imbibed new impressions, which under the aegis of his producers he turned into an altered sound aesthetics. A change of atmospheres that culminated in one of his pithiest singles, Heroes: cool synth layers accompany the “hero just for one day”.

In 1978 the Pop magazine Musikexpress, then still based in Hamburg, drew up the balance of Bowie’s Berlin era in a several-page “Special Story”. The thrust: Bowie and Iggy Pop, along with the production genius of Brian Eno and Tony Visconti, had prepared a basis for a German Punk avant-garde. Bowie himself never directly worked together with the later main figures of the “New German Wave”, but alone the knowledge that the Pop grandmaster might show up in local New Wave discos like Jungle inspired the scene. And regardless whether the major Rhenish producer Conny Plank (Can, Neu, Kraftwerk) really nonchalantly declined an offer from Bowie of a studio collaboration, as some people say, the German sound pioneers felt themselves confirmed in their direction. Iggy and Bowie were suddenly drinking König Pilsener at corner pubs and buying rough overalls at the construction worker outfitter John Glet on Mehringdamm.

The experimental culture of the brusque, isolated city gave the German Federal Republic a new centre of gravity. One that received a socio-political dimension through the immense success of the contemporary best-seller Wir Kinder vom Bahnhof Zoo (We Children from Bahnhof Zoo) by Christiane F. In the film version, Bowie, who in a television documentary had called West Berlin the “world capital of heroin”, made a cameo appearance. The unsparing hardness of the drug scene, the rampant “no future” mentality, the “dance on the volcano”, was soon to be set to staccato rhythms by Punk and New Wave and find a hitherto unknown realization in the street battles of the squatters scene.

In this way a new generation was recruited to the Rolling Stones’ “street-fighting men” of the sixties. By the time the atonal attacks of the Einstürzende Neubauten (Collapsing new Buildings) blazed the way, Bowie had moved again. It was only in later interviews that he savoured the Tödliche Doris (Deadly Doris), Sprung aus dem Wolken (Jump from the Clouds) and the cool groove of the female band Malaria as a whole. In 1978, his last year in Berlin, the multi-talent played the lead role in David Hemmings’s Just a Gigolo with Marlene Dietrich, a stylish finish to his Pop phase that established him firmly in the charts.

In his almost two years in Berlin, Bowie knew intuitively how to combine the myths of German Pop culture. He had always seen Pop music in a larger context and presented it, through the styling and production of his person, as art. A touch of Andy Warhol, Velvet Underground and New York wafted through Berlin. You could say if you like that Bowie gave Germany a Pop appeal. At any rate, it was his merit to have given the then still very modestly-sized creative community of the old Federal Republic a decisive kick, even if this was not the reason he came to the city. Thereafter it was not only the Berlin scene that could go its own way.

Ralf Niemczyk has been writing since 1982 for magazines such as “Rolling Stone” on music, pop culture, sport and urban planning.