The New Zealand International Film Festival and the Goethe-Institut have commissioned Johannes Contag to compose an accompanying film score for the screening of the 1920ies film classic "Variety".

It’s a story which happened a long time ago and could be happening right now. It is a story of passion, eroticism, jealousy and brutality. Ewald André Dupont's Drama "Variety" is one of the most famous movies produced during the Republic of Weimar besides the classics "Metropolis" and "The Cabinet of Dr. Caligari". Now you have the unique chance to see the restored version of "Variety" (completed in 2015) at the New Zealand International Film Festival in Auckland and Wellington. 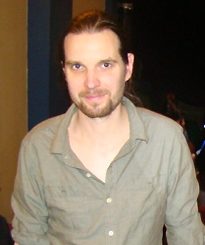 © New Zealand School of Music In order to support the unique character of this event, the movie will be accompanied by live music composed by Johannes Contag. The composer, musician and academic in language is primarily active in Germany and New Zealand and is not new to live music performances for silent film.

In 2013 he composed the live accompaniment for the filmclassic “The Crowd”. His musical oevre for “Variety” is a composition for chamber orchestra and piano and incorporates musical elements of composers who were popular during the 1920ies in Germany. It will be performed by the SMP Ensemble Wellington under the direction of Karlo Margetic.