The Goethe-Institut in co-operation with Wellington City Council offers artists from Germany a scholarship to work and live in New Zealand for three months. The artist resides in Wellington to engage and network with their New Zealand colleagues as well as to seek inspiration for their projects and to foster intercultural dialogue.

Hanno Leichtmann (*1970 in Timișoara/Romania) is a producer of electronic music, soundartist and curator of conceptual festivals for electronic music. Originally coming from improvised music (drums), Leichtmann dedicated himself to electronic music from 1998 onwards. He has made a name for himself with various collaborations and projects in the realm of minimal and experimental music. 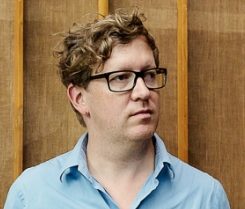 He released the soundtrack for Christoph Schlingensief’s movie “The African Twin Towers” (2005-2009). His solo project is called “Static” and he is a member of the bands “Groupshow” (with Jan Jelinek and Andrew Pekler) and “Denseland” (with David Moss and Hannes Strobl). With “Groupshow" he set the eight-hour Andy Warhol classic "Empire” to music several times. From 2008 onwards he curated several festivals and club series in Berlin. In addition, he is the man behind the label “picture/disk”.

Leichtmann has been working with sound archives since 2013. For his penultimate work "Nouvelles Aventures" he got a work and research scholarship of the city of Berlin in the field of new music/sound art. At the moment he is working on a sound installation for the "100 Years Beat" Festival at the “Haus der Kulturen der Welt” in Berlin. The installation is based only on the sounds of drummers and percussionists who have influenced and inspired him.