Residence experience
Reverberations from a spring in Berlin 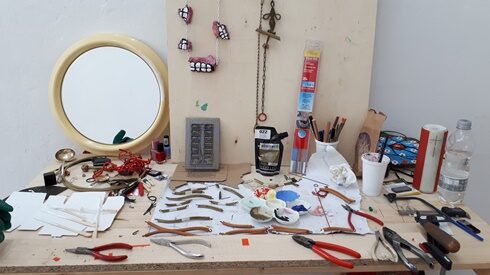 I arrived in Berlin on Easter Sunday, stepping out of the airport on a dark, frosty evening for a month long artist residency. I would be staying at the Hauptstadtstudio in Friedrichshain, a cozy live/workspace run by Das Institut für Alles Mögliche  -The Department of Anything is Possible.

Conscious of my precious perspective as a first time visitor, I began to explore my surroundings over the next week. The use of a bicycle meant I could meander around the back of industrial areas and through empty car parks without any fixed end point in mind.

During these wanderings I began collecting cast-off materials, wanting to make work with what was available. These physical and material explorations were then supplemented with research, looking at the changing social landscape of the city. I wanted to discover Berlin in a my own intuitive way, unclouded by expectation or the numbness of familiarity.

I unexpectedly came across remnants of the Berlin Wall, ‘rusted metal supports hanging in a void of concrete space’....journal entry 2 April

One of the first things I noticed as a potential material were the posters layered on pillars and electrical boxes. Collecting wads of the newsprint and tying them onto the back of my bike, these evolved into faceted paper mache rocks back in the studio. I was influenced by videos of post WWII Berlin showing women and children breaking the rubble down into rocks for new streets, like the cobbled street outside my front door. For me the rubble became emblematic of the transformative forces the city seems to pulsate with, the people. This collective spirit is still in strong evidence today in Berlin.

'Buildings have layers and construction sites inhabit the city. Art is everywhere grinding the dispossessed into the desirable’ ...journal entry 3 April

One site of particular influence was Tempelhofer Feld, an old airfield which was turned into a park following a public referendum in 2014. Since 2015, several hangars within the colossal structure of the Nazi era airport have controversially acted as temporary housing for refugees. I visited the newly opened container village beside the old airport, which was initiated in 2017 as a better quality and longer term housing solution. Peering curiously through the white rectangular wire fence encircling the containers, I saw some signs of habitation but couldn’t help feeling sad at the lack of homeliness.

On my way back through the rapidly gentrifying Neukölln a white metal grid was poking just far enough out of a construction skip for me to reach. Choked up with plaster, it reminded me of the stark fence at Tempelhof. Later in the month I wrapped some of the mangled metal found at Teufelsberg around the grid. this was my tiny gesture of beautification, emulating the flag-like  remnants of posters seen on construction fences around the city. The plaster I’ve picked out of the grid looks like teeth and I paint on fleshy gums to make a grotesque grinning necklace.

Teufelsberg is another site that had great impact for me. The dilapidated Cold War era listening station is built on a man made hill, the rubble of Berlin from WWII. The geodesic dome-topped spy station structures are now a open air street art gallery and site for sonic explorations. During my foraging I collect plastic and metal remnants from junk around the structures, old electrical parts and wires. In the top dome, which is less ravaged than the lower listening stations, I find the spot where I can whisper into my own ear thanks to the circular echo.


As Spring bloomed I joined the throngs visiting weekend flea markets including Mauerpark, Arkonaplatz and Boxhagener Platz. I tried to select materials that would help to express being part of a collective creative movement, illustrating the many layers of the city’s past, present and future. Objects were deconstructed and parts reconstructed into mainly wearable souvenirs of my experience in Berlin. Playing with stereotypes I was using materials that no longer served their original purpose, changing their function with the hope of offering a new future and story.

My making reached its zenith late in the month as I prepared for In-Co-Operation, a group show with nine of my fellow residents at the special exhibition space of the Abteilung für Alles Andere. This exhibition was a chance for us to celebrate our progress and show some of our work in a collaborative effort, as part of the annual Berlin Gallery Weekend 2018. My works were worn throughout the opening evening by my fellow residents and our hosts, exciting for me as some of their stories were directly related to the works they were wearing.

Now back in NZ at Workshop6 I'm continuing to resolve some of the jewellery pieces and objects, alongside embarking on a second generation of work. I’m aiming to extend beyond the specifically Berlin context, linking the new ideas and material knowledge with my existing practice and also moving towards more wearable works.

The residency period injected a huge amount of enthusiasm and freedom in my making. Free from commodification I began making bolder, more colourful works in a wider range of materials. This has expanded my visual vocabulary and I feel more connected to an international creative community. My eyes have been opened to new methodologies and materials and my mind is full of the transformative power of creativity for the benefit of community.

I will be hosting a preview of work resulting from the residency at St Paul St Gallery 3 from 5-8 December, all welcome. During this time visitors will be encouraged to wear the jewellery around the gallery and write their own imagined stories of it’s past/ present/ future context and use. These will be displayed with the work.